“Sisters of equal nobility,” was how Samuel van Hoogstraten described the relationship between poetry and painting, writing in 1678.1 Statements by writers from classical antiquity, such as Horace’s famous dictum, “ut pictura poesis”—poetry is as painting— inspired authors in the sixteenth, seventeenth, and eighteenth centuries to discuss the similarities between the visual arts and literature. The aim was to elevate the status of the visual arts from humble craftsmanship to the sphere of the liberal arts. Take Vondel’s advice to young writers, for instance. Vondel advises them to begin by translating works by renowned poets, which he compares to the customary practice of copying by apprentice painters. “Thus does one study the craft in the best masters, and learn, deftly purloining, to become oneself. Whosoever is eager to learn, will not be disheartened by the fundamental principles, which are always daunting. Just so does a small child learn to walk, clasping chairs and benches, and in due course, having grown bolder and sturdier, dare to let go and to dispense with support.”2 Interestingly, Rembrandt depicted a child learning to walk in a print dating from 1646, and as in Vondel, the image serves to evoke the learning process. In the background of this print, which is known as The Walking Trainer, we see a woman kneeling to help a small child to take a few steps with a walking trainer, while two youths, one standing and the other seated, pose in the foreground (fig. 1). That these young men are posing is clear from a number of extant drawings that were made by different draftsmen. The standing youth is depicted in the same pose in three different drawings, each time from a slightly different angle (fig. 2). This shows that the three draftsmen practiced drawing after live models under Rembrandt’s supervision, seated side by side. 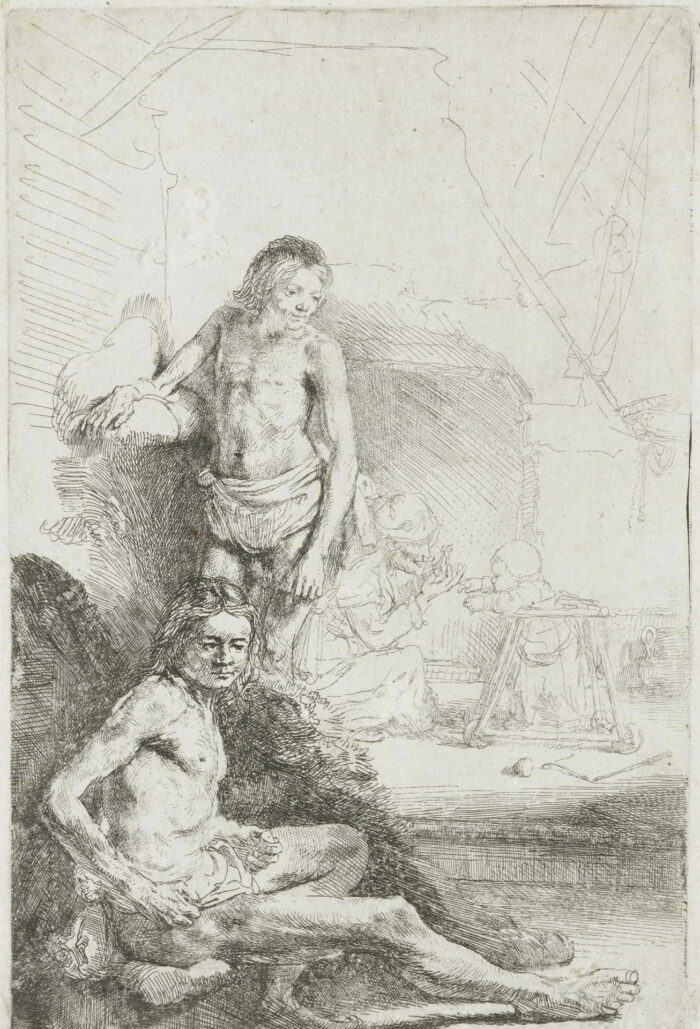 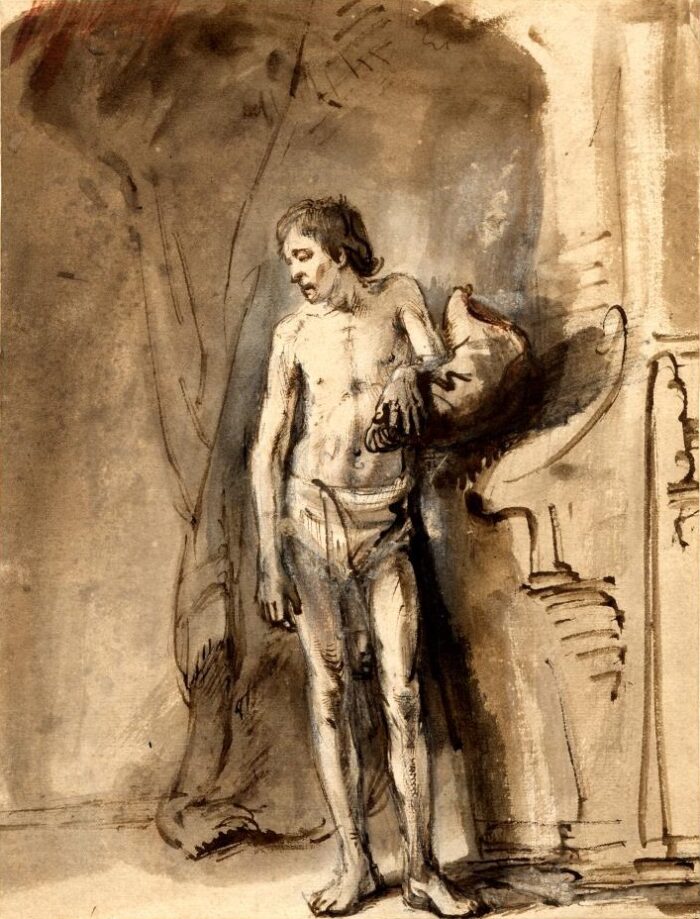 Another example of similar characteristics in the two art forms can be found in a passage of Van Hoogstraten’s work in which he both praises Rembrandt and chastises him. He starts by quoting an admonition by the Roman philosopher Seneca directed at Ovid, who had ruined the grandeur of his depiction of the Flood, according to Seneca’s rebuke, by adding implausible details. Van Hoogstraten then proceeds to praise the ordonnantie (composition) of Rembrandt’s grisaille entitled The Preaching of St. John the Baptist, especially in relation to the expressions of undiluted attention on the faces of the extremely diverse throng of listeners (fig. 3). According to Hoogstraten, Rembrandt, like Ovid, fatally undermines the otherwise superb grisaille by adding the indecorous detail of a dog mounting a bitch, a detail that jars indefensibly with the seventeenth-century rules of decorum in a scene depicting St John the Baptist.3 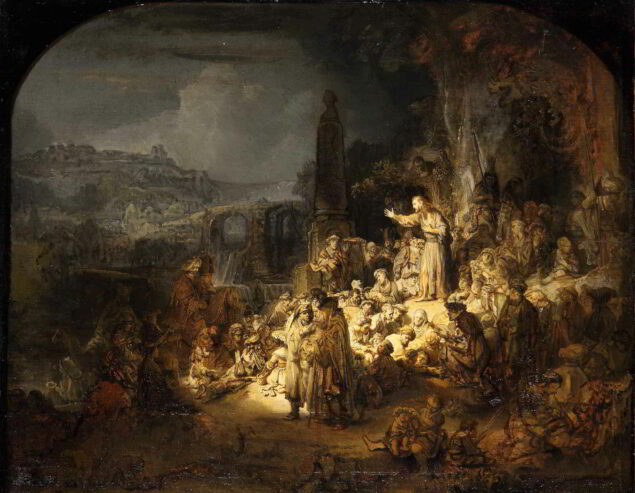 Notwithstanding the often-stated similarities between the two art forms, we also find interesting comparisons that highlight the differences between them. These differences were frequently invoked in debates on the relative superiority of two art forms. A case in point is Leonardo da Vinci, who drew attention to the different material that each artist had at his disposal: “There is the same difference between the poet’s and the painter’s representation of the human figure as there is between dismembered and united bodies. Because the poet in describing the beauty or ugliness of any figure can only show it to you consecutively, bit by bit, while the painter will display it all at once.”4 The same distinctions frequently recurred in the art theory of the sixteenth, seventeenth, and eighteenth centuries, in Italy and elsewhere. Thus, Martin de Charmois expressed it succinctly in a petition drawn up in 1648 at the founding of the French Academy of Painting and Sculpture, when he described the art of painting as “this universal language, which shows in an instant what writers must needs expound with many words.”5 Whereas both Leonardo and De Charmois praised the fact that an entire painting can be seen at once, as compared to the need for a text to be read one word at a time, this value judgment underwent a reversal in the latter half of the seventeenth century. That happened when the literary term “unity of time” was introduced into the theory of painting.6 This refers to the rule according to which the action of a tragedy should unfold in the same period of time, as far as possible, as that in which the action is presented on the stage. By analogy, it was inferred that since a painting can be seen in its entirety at a glance, it can depict only one moment in a story. This conclusion ultimately led, in 1766, to the treatise of Gotthold Ephraim Lessing,7 in which this distinction marks the dividing line between painting and poetry: in poetry it is possible to depict the passage of time; the visual arts can depict not time, but space. 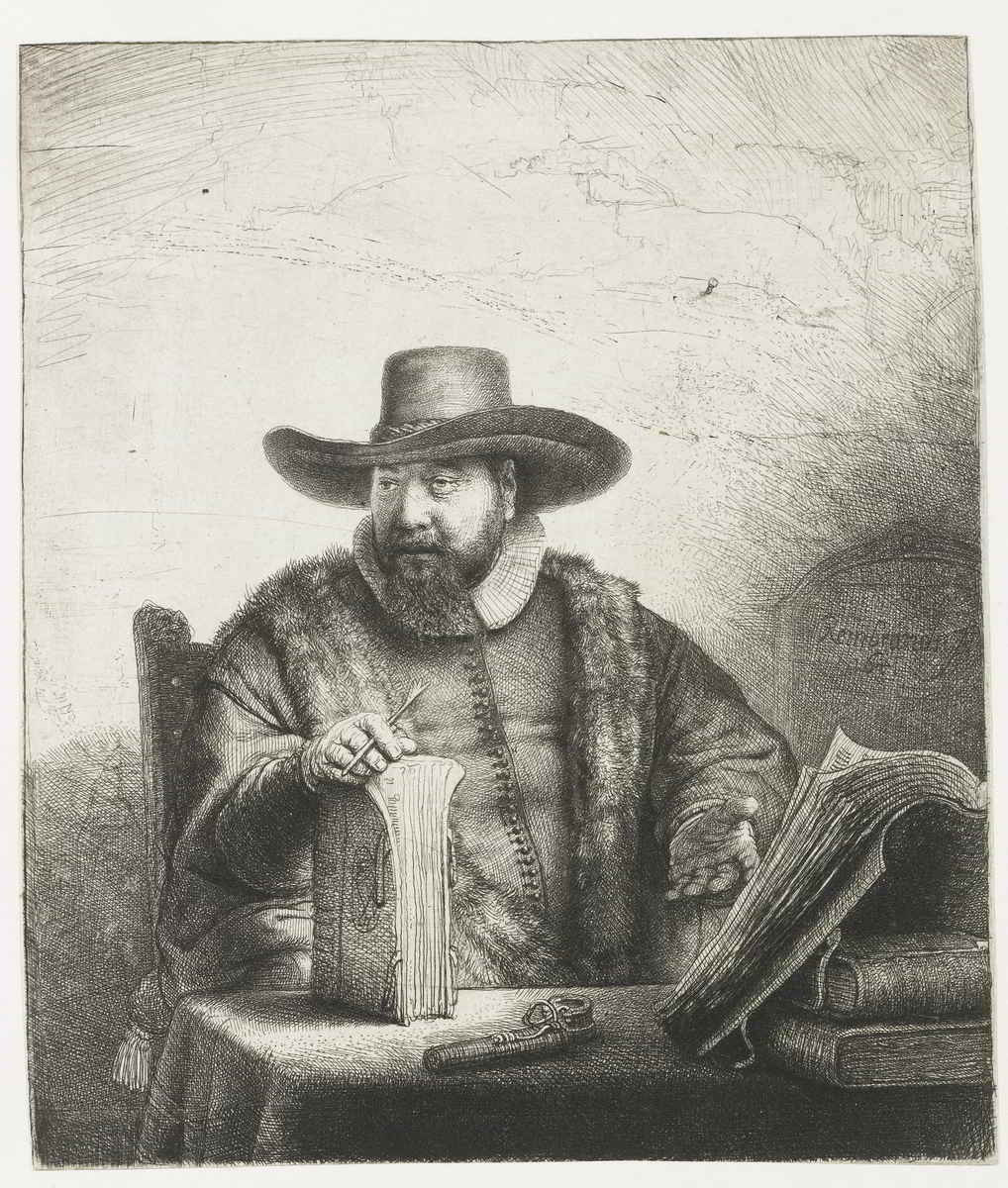 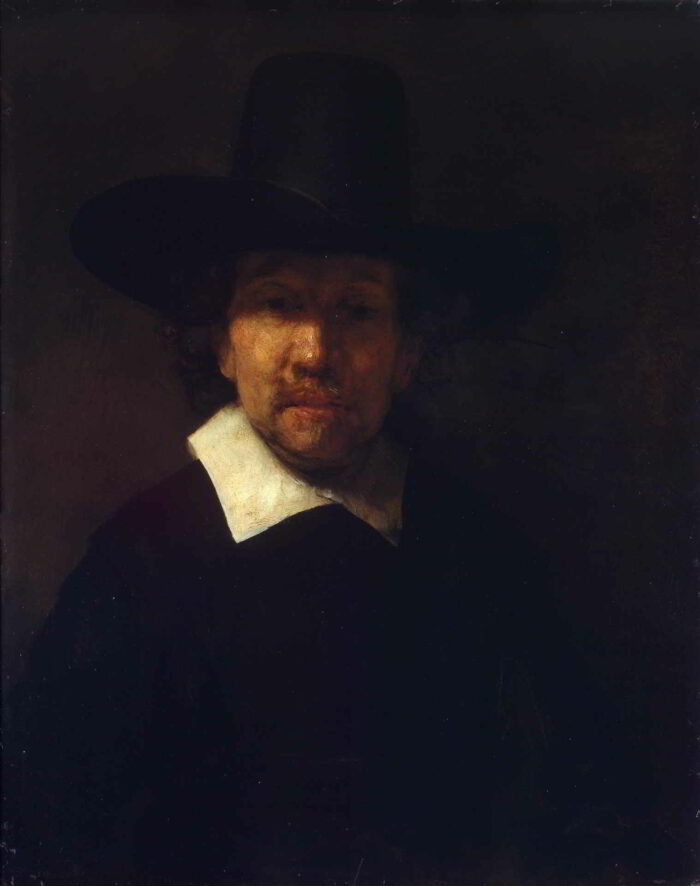 Seventeenth-century Dutch treatises pay little attention to the aspect of time. However, they do focus on a different distinction between word and image, namely, the capacity of poetry to convey the inner life as opposed to appearances. It was the art historian and poet Jan Emmens who highlighted this contrast in an inspiring article published in 1956.8 Key to his argument is Vondel’s quatrain: “Say Rembrant, paint Cornelis’s voice, / the visible part is the least of him: / the invisible one knows only through the ears. / If one wants to see Anslo, one has to hear him.”9 Emmens shows how this quatrain about Rembrandt’s portrait of Cornelis Claesz Anslo does not so much reflect the personal relations that existed between Vondel and Rembrandt; rather, it links up with a long tradition of views on the hierarchy of word and image, and of hearing and sight. He shows convincingly that the view of the superiority of word and of hearing as expressed in Vondel’s quatrain is particularly apt to the portrait of the Mennonite preacher. It is impossible to infer from Vondel’s poem whether it relates to Rembrandt’s 1641 print with the portrait of Anslo (fig. 4) or to the painting dating from the same year, now in Berlin, which depicts Anslo speaking to his wife, Aeltje Gerritsdr Schouten, who is listening with rapt attention.10 Many other aspects of the relationship between the visual arts and literature in the seventeenth century suggest themselves. For instance, it would be interesting to look at those whose talents embraced both paintings and poetry, such as Adriaen van der Venne and Samuel van Hoogstraten. Another interesting subject would be the St. Luke’s Feast of 1653 in Amsterdam, at which the assembled painters, poets, and devotees paid tribute to Vondel. Unfortunately, there is no room for such discussions here. Still, there is one other subject that cannot be omitted from this essay, and that is friendship. Rembrandt’s oeuvre includes several works that were made out of friendship for a poet. These include two drawings by Rembrandt in the album Pandora, in which the burgomaster, art connoisseur, and poet Jan Six kept pieces of writing and drawings that had been given to him. The subjects of these drawings—Homer Reciting His Verses and Minerva in Her Study, both from 1652—are highly appropriate as tributes to the scholarly poet Jan Six.11 A second example of a work that sprang from friendship is Rembrandt’s portrait of the poet Jeremias de Dekker, now preserved in the State Hermitage Museum in St. Petersburg (fig. 5). That this portrait was not commissioned but made and presented as a gift can be inferred from the poem of thanks (Danck-Bewys) that the sitter wrote in response, which ends as follows: “So, three times thank you for your gift and favor, / so do accept this brief poem, / as a token of my gratitude, / my debt for your kind favor.”12

I too want to end with a word of thanks, Gerdien, for your unflagging dedication to CODART, for the congenial, informal atmosphere you were so gifted at creating in this professional network, and above all for your personal friendship. I have every confidence that this friendship will endure after your departure from CODART, and that we will share many more experiences of our reading in the years to come.

Michiel Franken is Curator Technical Documentation / Rembrandt and Rembrandt School at the RKD – Netherlands Institute for Art and has been a member of CODART since 2007.