The Chatsworth House Trust announced the arrival of an important addition to the Devonshire Collection – A View of Chatsworth by Flemish landscape painter Jan Siberechts, painted circa 1703. Until now a painting of the house and garden in the 1st Duke’s time was missing from the collection. This large scale, detailed painting is now on display at Chatsworth, with a series of landscape paintings of the house and garden detailing major changes through the past 400 years.

The Duke of Devonshire said “I am extremely excited that this landscape has joined the Devonshire Collection. It will be of great interest to our visitors as it portrays on a grand scale a complete view of Chatsworth, house, garden and park as built and laid out by the 1st Duke and this enables us all to know so much more about Chatsworth at the very beginning of the 18th century”. 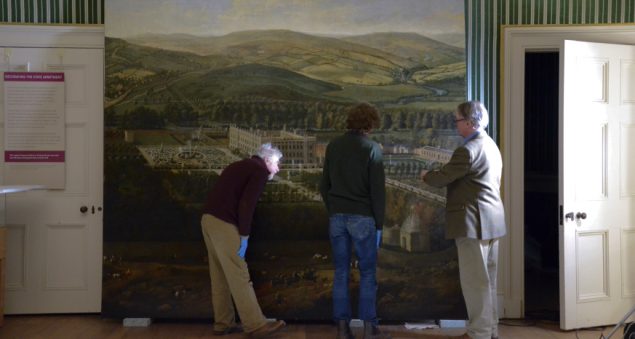 This bird’s eye view of Chatsworth originally belonged to Admiral Edward Russell, later 1st Earl of Orford, a close friend and political colleague of the 1st and 2nd Dukes of Devonshire. It passed by descent to his great-niece Letitia Tipping who married the 1st Lord Sandys in 1725, and has remained in the Sandys family until now.

Previously catalogued as by an unknown late 17th century English artist, A View of Chatsworth has recently been re-attributed by Omnia Art to Jan Siberechts, who specialized in painting bird’s eye views of English country houses in this period. Siberechts is known to have worked for the 1st Duke of Devonshire as payments to the artist are recorded in the Chatsworth archives, and a number of watercolors by Siberechts exist showing views of Derbyshire near Chatsworth.