A small portrait of a child has enriched the collection of the Dordrechts Museum. Sander Paarlberg, the museum’s curator of old master paintings, writes to us that just as the museums in the Netherlands reopen again after the lockdown rules have relaxed, a touching new acquisition is presented that celebrates new life: it is a portrait of an unknown baby of 8 months old. Painted on panel in 1646 by Jacob Gerritsz. Cuyp (1594-1652), a prolific portraitist from Dordrecht and the father of the more famous landscape painter Aelbert Cuyp (1620-1691). Due to the Coronavirus crisis the exhibition In the light of Cuyp. Aelbert Cuyp & Gainsborough – Constable – Turner has been postponed to October 2021. However, the new painting of a baby by his father also highlights the 2020 Cuyp year in Dordrecht and marks the 400th anniversary of the birth of Aelbert Cuyp. It is a special acquisition for the Dordrechts Museum that houses the largest collection of works by the Cuyp family. This is the smallest painting the old Cuyp made and the youngest sitter he portrayed.

With large eyes and round cheeks the baby looks out of the picture diagonally. The unknown parents of the child who commissioned the portrait, must have been very proud: the healthy boy is almost a symbol of Dutch prosperity. Curiously, the child’s weight is inscribed on the reverse (“Weecht. 28. lb”). Jacob Cuyp has depicted the chubby baby for almost three quarters against a dark background. This inadvertently creates the impression that the child is already standing up. The most famous children’s portrait by Jacob Cuyp is the portrait of six-year-old Michiel Pompe van Slingelandt with his falcon and dog (also in the Dordrechts Museum, on loan from the RCE), which was made three years after the new acquisition in 1649. Michiel was previously portrayed by the Rotterdam painter Hendrick Maertensz. Sorgh, as a baby in 1644 (private collection, USA). The problem that a very young child cannot sit or stand independently was solved by Sorgh by depicting Michiel on his mother’s lap. Undoubtedly, our 8-month-old child also posed that way when Jacob Cuyp made preparatory drawings for the portrait. The fact that the mother has been left out and no one is holding the baby makes the portrait of such a helpless baby even more endearing. 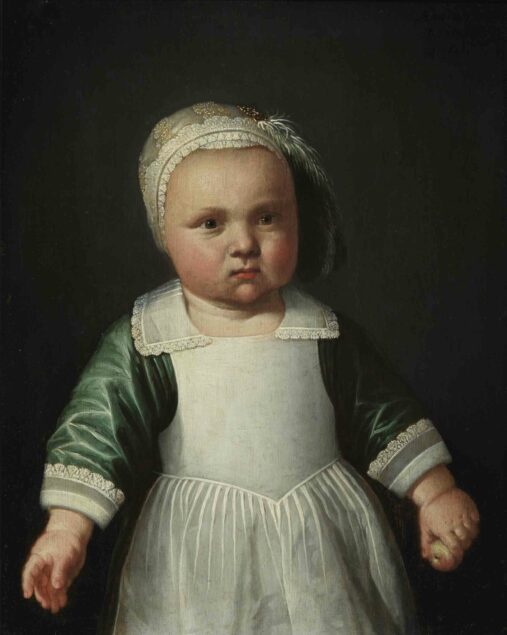 The small panel (it only measures 32.5 x 26.5 cm) has been preserved in its original 17th-century ebony frame that almost doubles the size of the painting.

Both boys and girls have long been depicted in skirts, but details can give an indication of the gender. Here it is most likely a boy, as Marieke de Winkel has pointed out. The shape of the collar is more like a male model collar than a female collar. Also: the feather on the tight children’s hat indicates that it is a boy. More information can be found in the latest issue of the Dordrechts Museum magazine Culthure.

In its left hand the baby boy is holding a small piece of fruit, the only attribute in the portrait. Fruit in Dutch 17th-century children- and family portraits often refers to the child or to the fertility of the family. The boy is not the youngest sitter in the portrait collection of the Dordrechts Museum. In 1621 the birth of a quadruplet in the city was reason for an anonymous painter to portray the four newborn children of whom one had already died (painting on loan from the Noordbrabants Museum). A Psalm text on this portrait that is known as The Quadruplets of Dordrecht underlines the fruit symbolism: “Behold, children are a heritage from the Lord, and the fruit of the womb is a reward”.

Jacob Cuyp was not only the teacher of his son Aelbert, but also an important pioneer who paved the way for his son. Aelbert also had success with children’s portraits. A few years after his father’s death, he still painted portraits, also of babies. In 1655, he portrayed a one-year-old girl as a shepherdess with flowers in her hair (private collection, Europe). She is really standing, but seems to find support from the sheep she feeds. Jacob’s network of distinguished clients, who liked to have themselves and their children portrayed by him, has been of great importance to Aelbert. Soon these prominent Dordrecht families were also interested in Aelbert’s sunny landscapes. It makes us all the more curious about the identity of the 8-month-old boy. The portrait hung in the castle Slot Zuylen for a long time and was owned by the Van Tuyll van Serooskerken family. Perhaps it will become clear in the future whether there is a connection with a Dordrecht family.

The different members of the Cuyp family (apart from Jacob and Aelbert Cuyp there is also Benjamin Cuyp, Jacob’s half brother) constitute the core of the collection of old master paintings in the Dordrechts Museum. The exhibition In the light of Cuyp. Aelbert Cuyp & Gainsborough – Constable – Turner was planned for this year to celebrate the 400th anniversary of the birth of Aelbert Cuyp, Jacob’s only child. Due to the Corona crisis the exhibition has now been postponed to 3 October 2021 – 6 March 2022. For the first time In the light of Cuyp will focus on the appreciation and collecting of Cuyp and his influence on British landscape painters.