The Rijksmuseum has procured a painting by Gerard van Spaendonck, a floral still life of the second half of the 18th century. According to the museum it was a long-cherished wish to include in its collection an important work by this Dutch painter of international renown. Still Life of Flowers and Alabaster Vase was purchased from a gallery in Paris for €900,000 and is already on show in gallery 1.11.

Gerard van Spaendonck (1746-1822) was born in the southern Dutch city of Tilburg and settled in Paris in the 1760s. He gained fame not only as a painter of floral still lifes, but also as the illustrator of the French king’s botanical collection, a highly prestigious position. He was a leading and active figure in the Parisian art world and a teacher of countless French and foreign artists. Gerard van Spaendonck did not make a great number of paintings, instead devoting much of his time to his watercolors of plants, and to his students. He is nonetheless considered to be his era’s best painter of flowers. 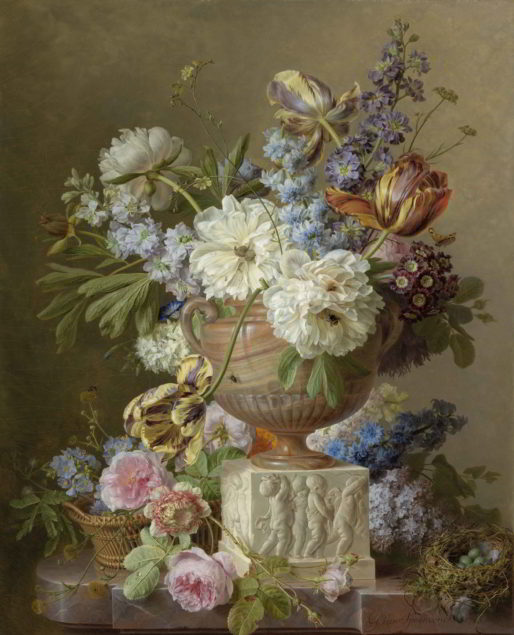 Gerard van Spaendonck exhibited this floral still life at the Salon de 1783 in Paris, and it received great praise from critics, including compliments for his lifelike depictions of insects. The painting shows a bouquet of flowers in an alabaster vase standing atop a marble block on which children are depicted in relief. The painter’s studio window can be seen reflected in the polished surface of the vase. The flowers that feature in this painting include large white and smaller pink peonies, blue delphiniums, purple lilacs, and yellow and purple flamed tulips. Insects can be seen dotted about, and five green blackbird eggs lie in the nest on the right. Even the wicker basket seems almost real enough to touch.