The Rijksmuseum has received a seascape by Ludolf Bakhuysen as a gift from the Broere Charitable Foundation. A Seascape with Figures by a Boat on a Shore shows a serene view of the beach at Huisduinen, a village near Den Helder in the Netherlands. Ludolf Bakhuysen, who painted the panel in 1667, was one of the most prominent and prolific marine painters of the seventeenth century. The intention behind this generous gesture by the Broere Charitable Foundation is to offer moral and financial support to the Rijksmuseum and its employees during the difficult period of the Covid-19 pandemic. The painting will be on display in the Rijksmuseum from 9 June.

A Seascape with Figures by a Boat on a Shore represents an unusual aspect of Bakhuysen’s body of work. The painter’s reputation is mainly based on his dynamic harbour views depicting a variety of ship types, and dramatic storms at sea with imposing cloudy skies. This painting, however, is one of the highlights among his tranquil, harmoniously composed coastal views, which are much rarer. Under an expressive cloudy sky, two figures are shown making their way along the beach, watched by two onlookers. A boat is drawn up on the beach, its sails still hoisted. Bakhuysen creates vibrancy in the painting through the strong contrast between light and dark. 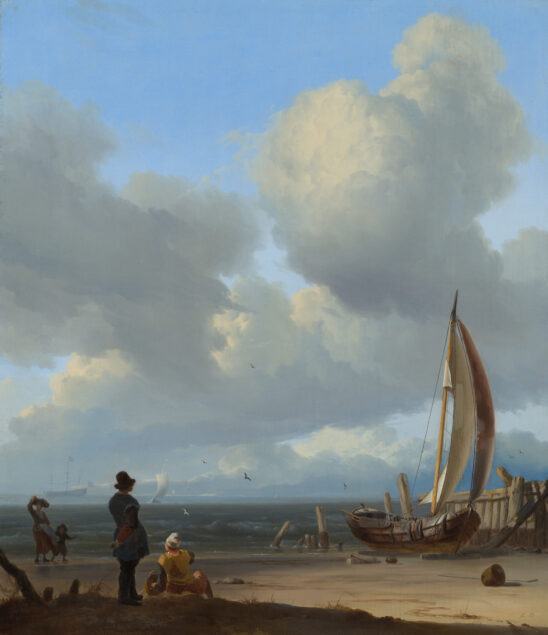 Ludolf Bakhuysen (1631-1708) was born in Emden, Germany. At the age of eighteen, he settled in Amsterdam as a clerk and bookkeeper. In the years that followed, he applied himself to drawing and painting and was soon receiving prestigious commissions. At the request of the Amsterdam city council, in 1665 he painted a view of Amsterdam and the IJ river, which was presented as a diplomatic gift to the Minister of Foreign Affairs of the French King Louis XIV (now in Musée du Louvre, Paris). Leading European dignitaries such as Grand Duke Cosimo III de’ Medici, King Frederick I of Prussia, the Elector of Saxony, and Tsar Peter the Great also visited Bakhuysen’s Amsterdam studio. Since the late eigteenth century, A Seascape with Figures by a Boat on a Shore has featured in the celebrated collections of monarchs and dignitaries such as Prince Eugène-Rose Beauharnais, Grand Duchess Maria Nikolaevna (the eldest daughter of Tsar Nicolas I) and the Duke of Leuchtenberg.

A Seascape with Figures by a Boat on a Shore by Ludolf Bakhuysen is the thirteenth highlight of Dutch and international painting and sculpture to be exhibited in the Rijksmuseum thanks to the Broere Charitable Foundation. Previous works which the Rijksmuseum received on long-term loan include Gerrit van Honthorst, Satyr and Nymph, 1623; Willem van de Velde the Younger, Dutch Ships in a Calm Sea, c. 1655. In addition to the Bakhuysen, the Broere Charitable Foundation donated a pair of 17th-century Japanese folding screens with scenes from_ The Tale of Genji_, painted by Kano Ryusetsu. The Broere Charitable Foundation was initiated by the late Jacobus and Bastiaan Broere, founders of the then highly successful oil storage and shipping company Gebroeders Broere NV in Dordrecht. The Foundation has since been funded by the Broere family and supports medical research and art. Its activities in the arts take the form of purchasing major works and making them accessible to the public in European museums.