The Amsterdam Museum is currently restoring one of its masterpieces, The Headmen of the Longbow Civic Guard House (1653), by Bartholomeus van der Helst (ca. 1613–1670), which will form the centerpiece of an exhibition at TEFAF Maastricht 2018.

The group portrait depicts several prominent sitters: former burgomaster Jan van de Poll (1597-1678), brewer Albert Dircksz Pater (1602-1659) and the famous cartographer and publisher Joan Willemsz Blaeu (1598-1673). Together, they were responsible for the keeping of the Longbow Civic Guard House, including its collection of group portraits and historic artifacts. 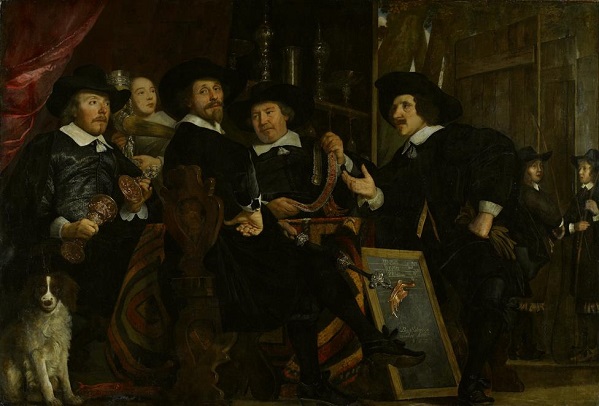 Van der Helst’s masterpiece will be surrounded by five other group portraits that have been recently restored. Together they bear witness to the flourishing and quality of group portraiture in Amsterdam during the Golden Age.

Two of the paintings are by Ferdinand Bol (1616 – 1680), both restored in 2017, depict the governors and governesses of the Amsterdam Lepers’ Asylum. They are currently on show in the exhibition on the artist at the Amsterdam Museum. Another Van der Helst group, The Headmen of the Arcquebusiers’ Civic Guard House, has been on loan for five years at the National Gallery of Art in Washington, following its 2011 restoration, and will now be on show for the first time since it was returned to the Netherlands. Finally, two Anatomy Lessons, one by Aert Pietersz (1550 – 1612), the other by Adriaen Backer (1635 – 1684), have also been restored in collaboration with institutions that subsequently had the paintings on loan for exhibitions. Since 2016 the latter work has been on view in the Portrait Gallery of the Golden Age, a permanent exhibition in the Hermitage Amsterdam centered around the impressive collection of Amsterdam group portraits.