Last month, a team of researchers discovered a drawing from the workshop of Rubens in the City Museum of Lier (Flanders). The drawing was made after a lost portrait of Isabella d’Este by Rubens. An elaborate account of the discovery by Bert Schepers and Sarah Van Ooteghem has now been published in the latest Rubenianum Quarterly.

Researchers from the Royal Library and the Rubenianum, who are working on a joint project to list seventeenth-century Flemish Master Drawings, were on a work visit at the museum when they found the drawing. Rubens’s portrait of Isabella d’Este, a tribute to his role model Titian, has been lost. The drawing, which the authors attributed to Lucas Vorsterman, gives an impression of what the portrait by Rubens looked like. Up until now, a print by Vorsterman was the only known copy of the painting – no painted copies have been identified. The discovery of the preparatory drawing for this engraving brings us one step closer to the lost painting.

Vorsterman was the first engraver employed by Rubens in his workshop in 1619. Rubens supervised the production of the prints that were made after his work, and corrected them if necessary. According to Sarah Van Ooteghem, Assistant Curator at the Print Room of the Royal Library, drawings by Vorsterman are rare and differ in technique. Only a handful can be securely attributed to Vorsterman. In terms of its execution and composition, the drawn portrait of Isabella d’Este can best be compared to a very similar design for an engraved portrait of Emperor Charles V, also based on a painting by Rubens (The Viscount Mountgarret, Harrogate, Yorkshire) after a lost masterpiece by Titian. The two engravings of Charles V and Isabelle d’Este are considered pendants, and their preparatory drawings share the same provenance as they both belonged to the collection of Everhard Jabach (1618-1695). 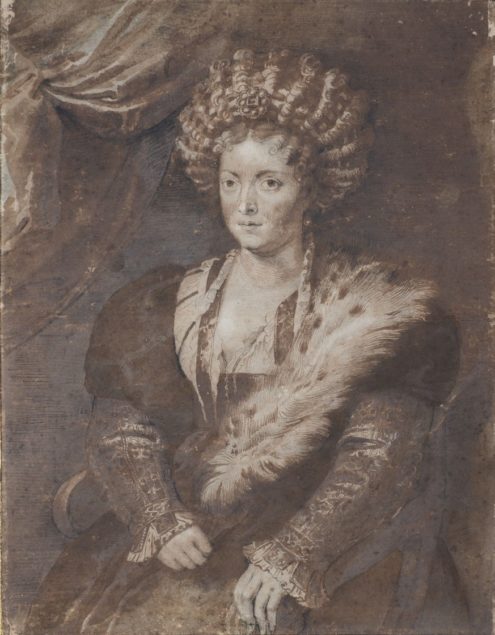