During the shooting of the Dutch television show “Tussen Kunst en Kitsch” a painting of Joost van Geel (1631-1698) has been discovered. In the show the public brings art and artefacts from their home. Experts are present to give their opinion on the items and an estimate of the value. Art dealer and CODART-mecenas John Hoogsteder was presented with a painting during a shooting in Zwolle some months ago. At that time he was not able to give a definite judgement on the painting.

Yesterday, during shoots at the Escher in het Paleis museum in The Hague, he was able to present the owner with the results of research he has done on the painting. Although it was first suspected the work might be by Gabriel Metsu, it has in fact been indentified as a work by Joost van Geel, a pupil of Metsu.

The work measures 31 x 26 cm. and depicts a female lacemaker. She is dressed in a satin dress and a fur coat. It will be presented when the show is broadcast on 9 February 2011. Until then the price will be kept a secret. Images of the painting are also not available as of yet. 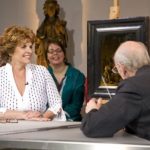