An unfinished portrait of a woman believed to be Mary, Queen of Scots has been found hidden beneath a sixteenth-century portrait attributed to the Netherlandish painter Adrian Vanson (died ca. 1604-1610).  The discovery was made during a significant research project recently conducted at the National Galleries of Scotland (NGS) and the Courtauld Institute of Art.

The ghostly image of a woman, which shows compelling similarities to other, near-contemporary depictions of the queen, was revealed by X-ray photography during an examination of a portrait of Sir John Maitland, 1st Lord Maitland of Thirlestane, which is attributed to Vanson. The painting is part of the National Trust collection and usually hangs at the Trust’s seventeenth-century historic property Ham House, near London. 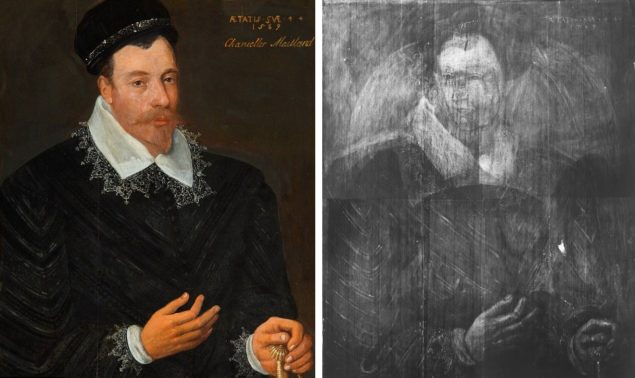 The portrait was one of a number of works by the portrait painters Adrian Vanson and Adam de Colone, two Netherlandish artists who worked in Scotland at the end of the sixteenth century and beginning of the seventeenth century, to be examined by conservator Dr. Caroline Rae, the Courtauld Institute of Art’s Caroline Villers Research Fellow, who recently undertook a collaborative research project in conjunction with NGS. The results of this collaborative research project, which set out to explore the respective artistic techniques of Vanson and de Colone, are revealed in the new display Art and Analysis: Two Netherlandish Painters working in Jacobean Scotland, which opened at the National Scottish Portrait Gallery in October.

Mary Stuart, often called Mary, Queen of Scots was a controversial figure. Forced to abdicate the throne in 1567 due to the suggestion she was implicated in her husband’s murder, then imprisoned by Elizabeth I from 1568, Mary was executed in England in 1587 – two years before the inscribed date on the overlying portrait of Sir John Maitland. Mary’s recent execution may be a reason why her portrait was covered over or abandoned by the artist.