The National Trust informed us that a carved fifteenth-century sculpture at Anglesey Abbey in Cambridgeshire has been discovered to be a unique reliquary bust, previously thought to have been lost to the art world. The bust of the martyr St Agnes has been identified as being by Niclaus Gerhaert von Leyden or his workshop. 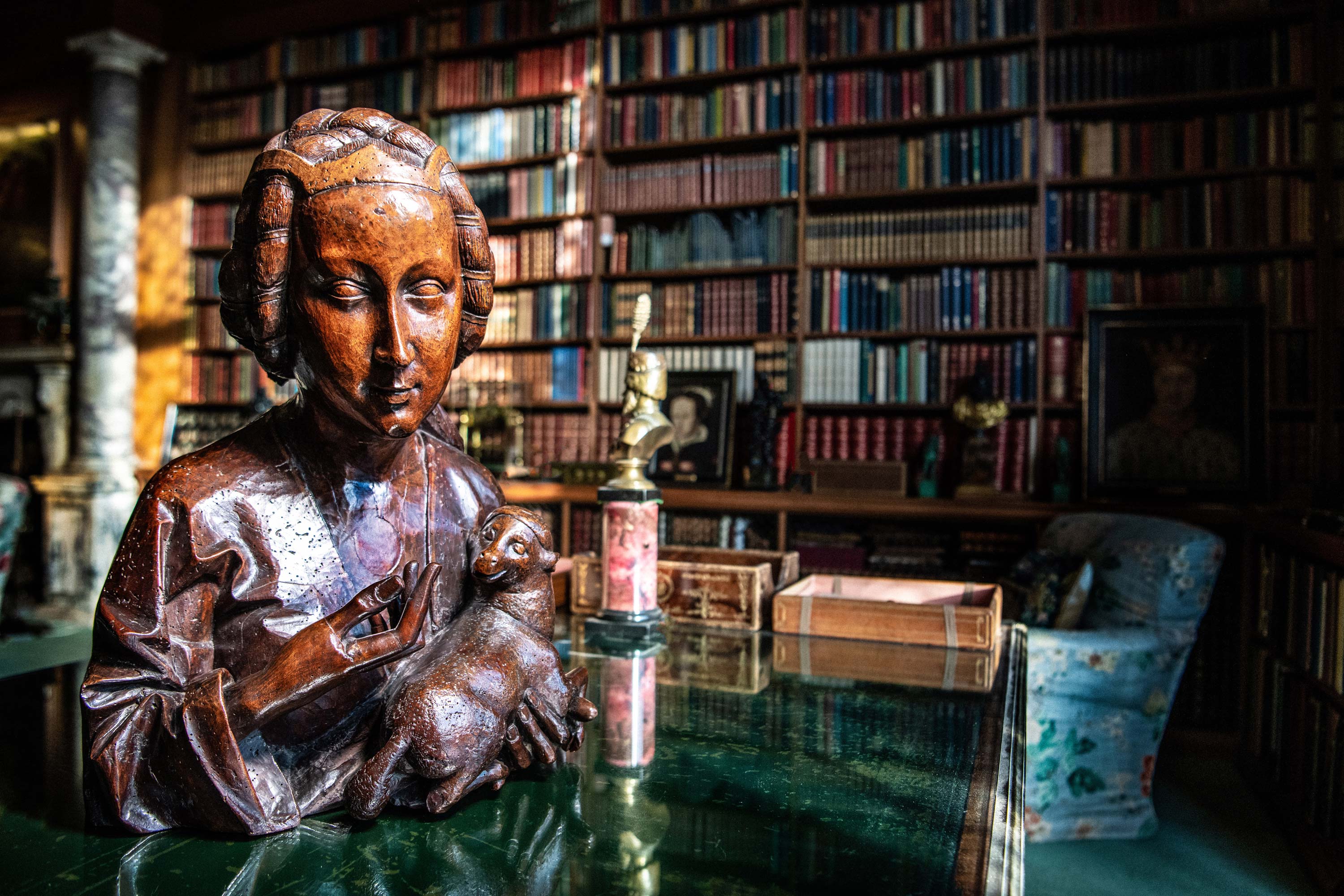 Niclaus Gerhaert von Leyden (ca. 1420 – after 1472) was a Dutch master sculptor who is considered to be one of the most important and influential artists of the Late Gothic period. His expressive realism in his work influenced many of his contemporaries. He worked in northern Europe, being recorded as working in Trier, Strasbourg and also Vienna. Only 20 of his works are believed to have survived and the newly-discovered sculpture is the only work by Gerhaert in a UK public collection.

The discovery was made as part of a National Trust four-year sculpture cataloguing project to fully record and research all 6,000 sculptures and statues in its collection. It is the first time the Trust has had the resource to study all of its sculptures in this way.

Known for his unusually lively and naturalistic sculptures, Gerhaert’s life-sized bust of St Agnes is carved from walnut and was made around 1465. It would originally have been painted and displayed in a church, probably as part of an altarpiece. The bust shows St Agnes holding a lamb and was a reliquary which would once have contained a piece of bone or another relic from the saint. The relic has long been lost and the cavity in which it would have rested has, at some point, been sealed.

The St Agnes was part of a set of four sculptures with St Barbara; St Catherine of Alexandria; and St Margaret of Antioch, commissioned for the Benedictine Abbey church of Saints Peter and Paul in Wissembourg, Alsace, north-eastern France. They survived in the church until the late nineteenth century, with plaster casts of all four busts made around 1870 which are now at the Musée de l’Oeuvre Notre-Dame, Strasbourg. Three of the busts were later sold in Paris between 1894 and 1910, and subsequently ended up in museums – Saints Barbara and Catherine were donated to the Metropolitan Museum of Art in 1917 while St Margaret was acquired by the Art Institute of Chicago in 1943. 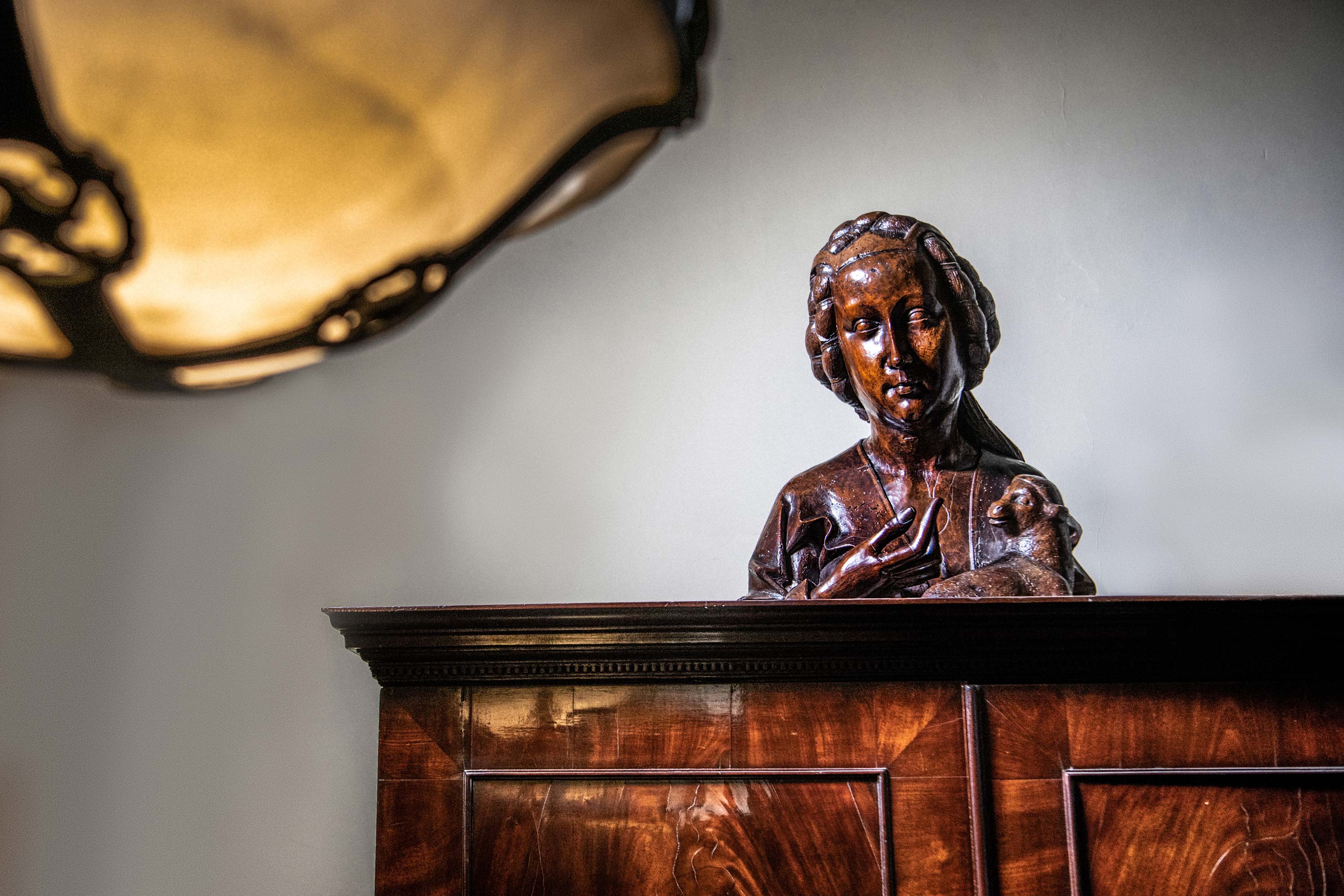 Nothing is currently known about the whereabouts of St Agnes from then until it came into the collection at Anglesey Abbey when it was purchased sometime between 1932 and 1940 by the house’s owner Lord Fairhaven, a keen collector of sculpture and statues. However, the bust was wrongly described in his 1940 inventory as ‘The Virgin and the Lamb’ and has been on display on top of a cupboard in the Windsor Bedroom for many years.

The discovery of its true identity was made by Dr. Jeremy Warren, the National Trust’s Sculpture Research Curator, who said: “It was clear to me that the sculpture was of superb quality, with enough clues to lead us to look at the work of sculptors who were working in the later 15th century. My research took me to the surviving plaster cast of this bust, which tied up all the loose ends neatly. It has taken over 80 years for St Agnes to be given back her identity.”

Following the identification of St Agnes, the bust is now being re-displayed in the Dining Room at Anglesey Abbey.