A painting found in a little-used storeroom of the historic Hoyt Sherman Place in Des Moines’ (Iowa) turned out to be work of Dutch painter Otto van Veen (1556-1629). The painting depicts a scene of Apollo and Venus and was already discovered in January 2016. It has now been restored and presented to the public. 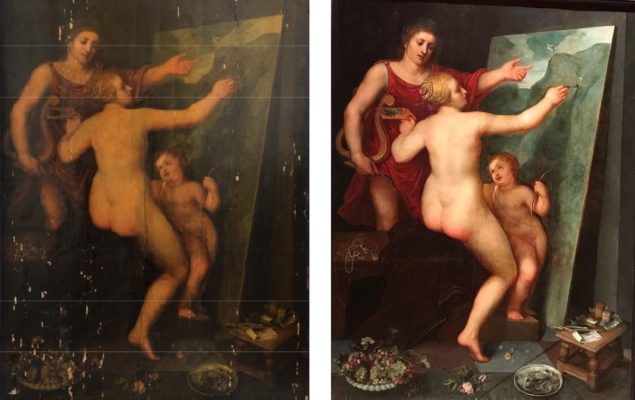 Apollo and Venus before and after restoration
Pictures: Hoyt Sherman Place

The painting was coated with layers of discolored varnish and former restoration work that flattened the three-dimensional quality of the scene and falsified the artist’s intended palette. Areas of former loss were present along splits in the wood and throughout scattered areas especially pronounced in the left third of the painting. The surface was heavily overpainted after a succession of former restoration attempts.

Four months of work were required to return the painting to its pristine visual appearance. The cleaning of the “Apollo and Venus” was a delicate process due to the painting’s overall instability and scale (H. 49 inches x W. 37 inches). Loose areas of paint were reset into place. Former losses were then filled and carefully retouched to match the original to both value and hue. A final non-yellowing varnish completed the treatment. The restorartion work was carried out by Barry Bauman, private conservator in Chicago and former Associate Conservator of Paintings for the Art Institute of Chicago.

Otto van Veen, also known by his Latin name Otto Venius or Octavius Vaenius, was born in Leiden around 1556. In 1574, he traveled to Rome for further study. Around 1580, he returned north. In 1592, van Veen settled in Antwerp. His presence there is verified from commissions he received for church altarpieces. He also oversaw a productive and vibrant studio with numerous students. His most famous pupil was Peter Paul Rubens who trained with van Veen from 1594 to 1600. He finally left Antwerp in 1615 and moved to Brussels, where he remained until his death in 1629.