Stedelijk Museum Alkmaar has received a very special gift: a magnificent cabinet dating from around 1680 and made by Pierre Gole, supplier to the court of the Sun King Louis XIV. This valuable piece of furniture was unexpectedly donated by husband and wife collectors, who saw Stedelijk Museum Alkmaar as the ideal setting for their showpiece.

Pierre Gole (c. 1620-1684) was born Pieter Goolen in Bergen (North Holland) near Alkmaar, but spent most of his life in Paris. He trained as a cabinet maker and worked his way up to become ‘master cabinet maker in ebony to the King’. He probably owed his entree to the French court to his brother-in-law Jean Marot, Louis XIV’s architect and father of the celebrated designer Daniel Marot.

Gole supplied hundreds of tables and cabinets for Versailles and other royal residences. His work is known for its superb marquetry—usually floral motifs in exotic woods and metals inlaid in an ebony ground. Gole’s son-in-law was the cabinet maker André-Charles Boulle.

The cabinet donated to the Alkmaar museum is made of ebony, inlaid with sumptuous floral motifs in a range of woods, pewter and brass. The museum is very proud of this fine acquisition and grateful to its donors. A gift of this quality is rare and of great significance to the Stedelijk Museum Alkmaar collection. The ‘Pierre Gole cabinet’ goes on display on Friday 19 December in the Golden Age room, which it will share with seventeenth-century old master paintings, and a collection of silver and seventeenth-century glass. 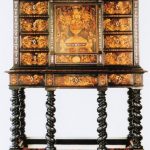 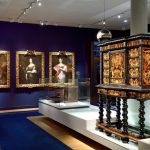 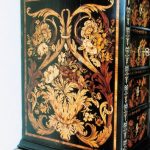 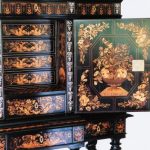