The Dutch Government announced yesterday its intention to purchase Rembrandt’s The Standard Bearer (1636) for the national collection. For centuries, the masterpiece has been owned by private collectors, including England’s King George IV and, since 1844, the Rothschild family. The self portrait, which was last shown in the Rembrandt-Velasquez exhibition at the Rijksmuseum in 2019, may be considered the most important painting by the artist still in private hands. The Rothschild family had offered the painting up for sale in 2018 but the French government declared it a national cultural treasure and issued a 30-month export ban that is about to expire.

The Standard Bearer is one of Rembrandt’s masterpieces and is inextricably linked to the history of the Netherlands. Standard-bearers were positioned in the front line in battle in the Eighty Years’ War, the War of Independence which led to the birth of the Netherlands in 1648. In this large self-portrait, Rembrandt paints himself looking rebellious and full of bravado. It was this artistic breakthrough that would lead to The Night Watch. 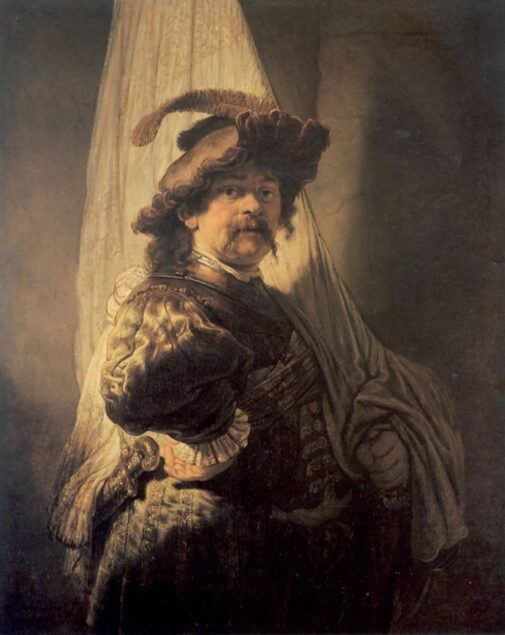 Rembrandt was thirty years old when he painted The Standard Bearer. He painted himself in the portrait in the most beautiful historical clothing. He consciously places himself in the northern tradition of portraits of standard-bearers by famous artists such as Dürer, Lucas van Leyden and Goltzius.

Standard-bearers had a dangerous task in the militia of the seventeenth century: they were on the battlefield in shiny clothing and brandishing flags.* The militia had an essential role in the Eighty Years’ War, the revolt against Spanish rule, which resulted in the birth of an independent Netherlands in 1648. At the same time, The Standard Bearer shows Rembrandt’s ambition to paint a group portrait for the Amsterdam militia, at the time the most valued commission a painter could be awarded. Rembrandt succeeded six years later when he was commissioned to paint The Night Watch.

The purchase of The Standard Bearer will be achieved through a combination of public and private financing. The Rembrandt Association will contribute €15 million, in addition to the contribution of the Rijksmuseum Fund of €10 million. The Dutch State will make up the remainder of €150 million, of which €19 million will come from the Museum Purchase Fund.

If the acquisition is successful, The Standard Bearer will tour the Netherlands and go on public display in each of the provinces. It will eventually be given a place in the Rijksmuseum’s Gallery of Honor.

* This news item has been edited on 15 December to correct that standard bearers did not went ahead of the troops, as noted by an observant reader. Positioned behind the font line and guarded by soldiers, the standard bearer’s role was to defend the standard with their life. Only young unmarried men were entrusted with this honorable task because they would not leave behind families in case they were killed.