Visitors to the Rijksmuseum can now enjoy The Night Watch in its original form, for the first time in 300 years. Several sections were cut from the painting in the past. The Operation Night Watch team has recreated these missing pieces, which have now been mounted around Rembrandt’s world-famous work. The reconstructed painting will remain on public display at the Rijksmuseum for the coming months.

It is known what the painting originally looked like thanks to the copy commissioned by Captain Frans Banninck Cocq – and probably painted by Gerrit Lundens in the period from 1642 to 1655. This copy served as the basis for the reconstruction made with the help of artificial intelligence.  In the first step, the team taught Rembrandt’s technique and use of colour to so-called ‘artificial neural networks’. Once this phase was complete, the computer recreated the missing parts in the style of Rembrandt. 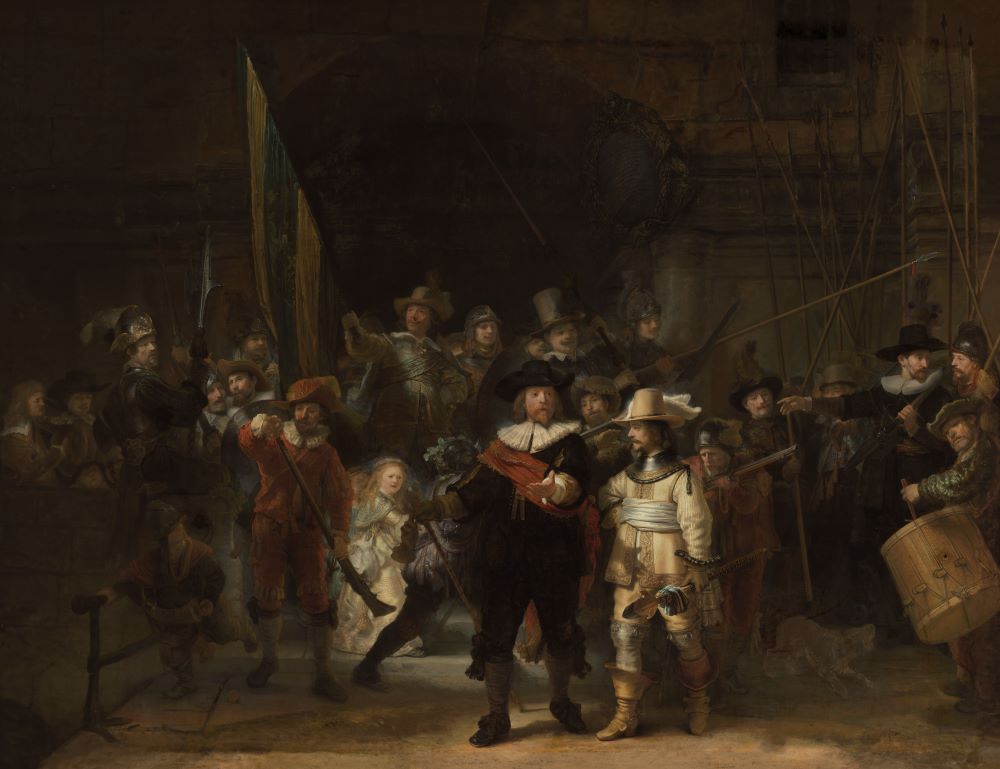 The reconstructed version of the Night Watch

There are a number of differences between The Night Watch as we know it today and the painting in its original form. On the left of the reconstructed version, for example, we can now see three figures on a bridge: two militiamen and a young child. And the painting’s main figures, Captain Frans Banninck Cocq and Lieutenant Willem van Ruytenburch, are now positioned to the right of centre, rather than in the middle of the canvas. These factors add a considerable sense of movement and dynamism to the painting. It is now also clearer that the powder boy in the left foreground is grasping a balustrade. The boy has furthermore gained space into which he can move, with the result that he seems more clearly to be running away, ahead of the militia. The helmet worn by the militiaman on the extreme right is now complete, and there is space above the standard, making the motion of the ensign as he raises the company’s colours more convincing.

The reconstruction of The Night Watch is an important component of the art historical research conducted as part of Operation Night Watch. By reconstructing the missing sections, printing them on panels, and temporarily placing them around the original painting, researchers can now experience the effect of the painting in its original form. Operation Night Watch is the largest and most wide-ranging research project ever conducted into Rembrandt’s masterpiece. The research began in summer 2019, and conservation work will only commence following completion of this phase. 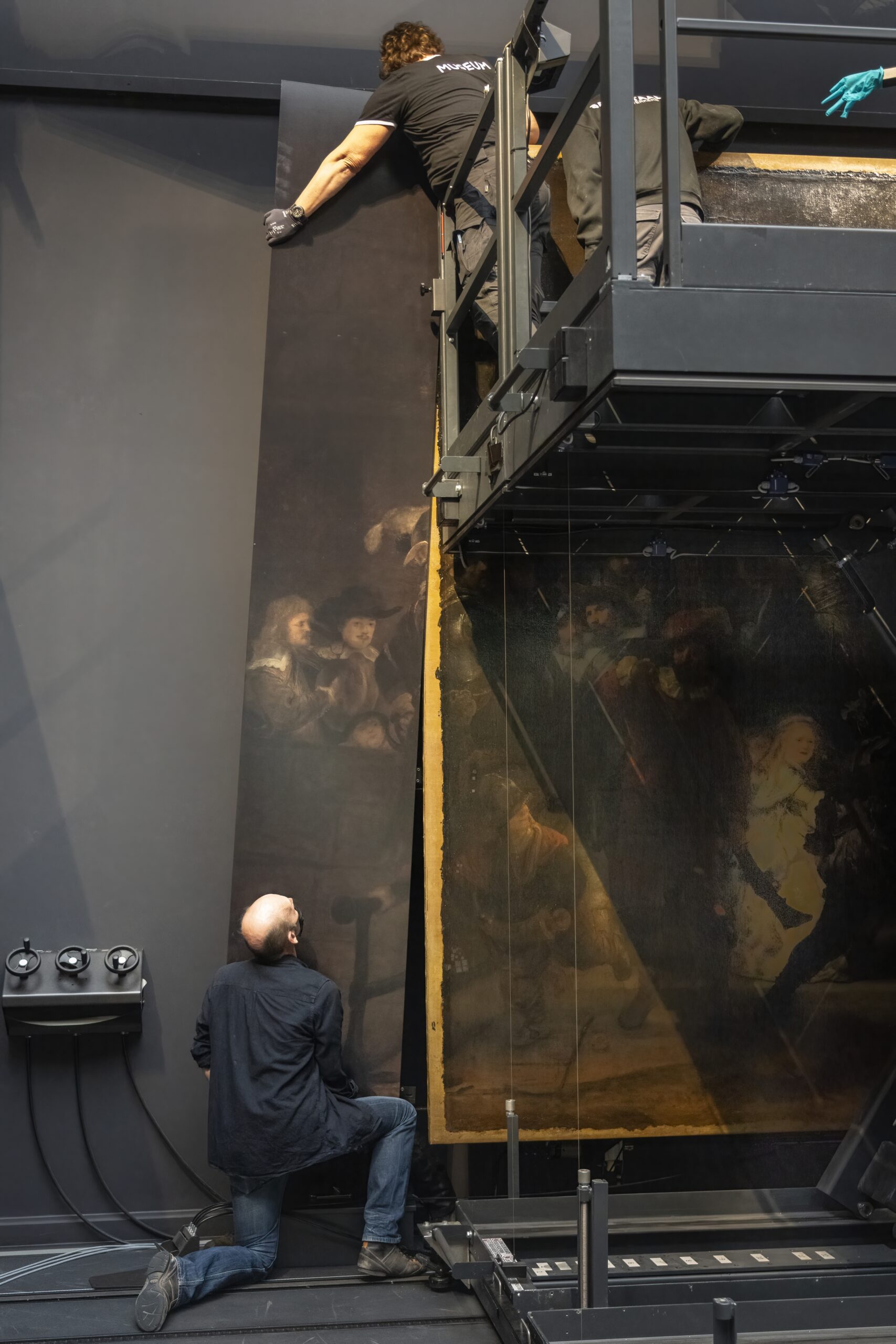 The missing piece on the left side being added to the original. Photo: Rijksmuseum/Reinier Gerritsen 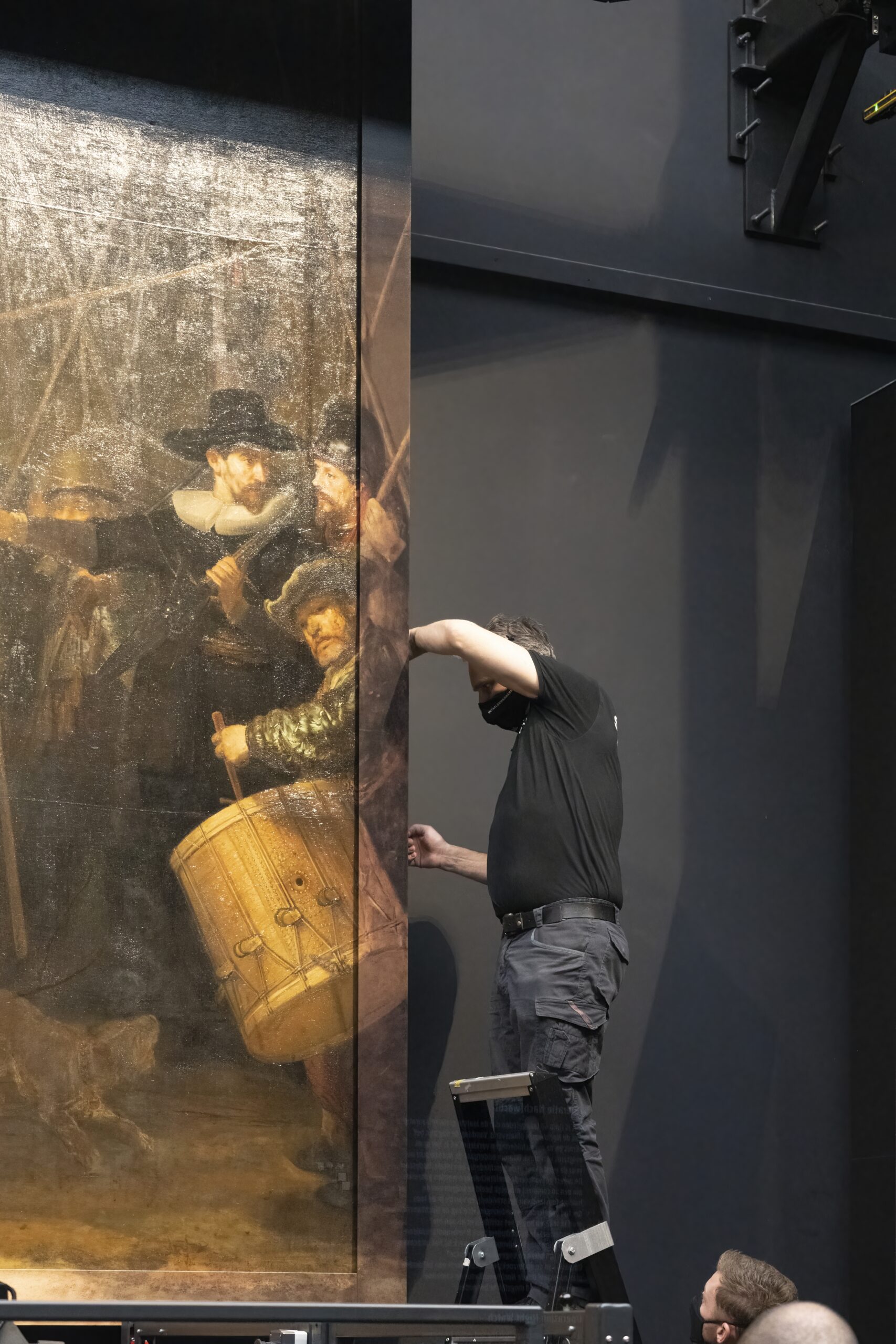 The reconstructed right side mounted to the original. Photo: Rijksmuseum/Reinier Gerritsen

Rembrandt finished The Night Watch in 1642. The militia commissioned Rembrandt to make the painting for its new banqueting hall at its headquarters, the Kloveniersdoelen. Hanging in this hall, the painting formed part an ensemble comprising seven militia portraits, or schuttersstukken. Experiencing the original composition allows for a better comparison with the six other works. It is not the museum’s intention to incorporate the lost pieces in the actual restoration of The Night Watch. In 1715, The Night Watch was moved to what was then Amsterdam’s City Hall, now the Royal Palace on Dam Square. The painting was too large for its new location, so it was reduced in size. Strips were cut from all four sides, with the largest section being removed from the left side. These pieces have never been found.

The reconstructed version of The Night Watch is also available for viewing on the Rijksmuseum’s new website, where visitors can zoom in on several images to explore the discoveries we have made in the course of our research. In addition, there is a video about how this reconstruction came about.

The Night Watch is part of the CODART Canon, read more about the artwork on our Canon website.