Everyone who is involved in some way with Old Master paintings knows that much of the pleasure is in looking at the details. That applies not only to acknowledged masterpieces, but also to paintings by lesser masters, including the still-life painter Adriaen Coorte, now riding high on a wave of unprecedented popularity, or the ever-enigmatic petit maître Jacobus Vrel. Only one painting by Vrel, Woman at the Window in the Kunsthistorisches Museum in Vienna (fig. 1), bears a date—1654. It was acquired early on for the collection of Archduke Leopold Wilhelm of Austria (1614–1662), Governor of the Spanish Netherlands at the Brussels Court in the period 1647–1656. In the 1659 German inventory of his collection, Woman at the Window is described at number 739, along with another painting by “Frell”, Interior with a Sick Woman by a Fireplace, now in The Leiden Collection, New York: “Two paintings of the same size, oil on panel, one depicting a sick woman sitting by a Dutch chimney, and the other showing a woman looking out of a window” (in translation). The artist must already have been active some years before 1654, probably from around 1650. We know nothing at all about Vrel’s life; unlike Coorte, he cannot even be confidently assigned to the Dutch School. Vrel’s genre scenes are characterized by a relatively simple composition and an introverted mood, and this is precisely what resonated deeply with Gerdien Verschoor some years ago. It was on Monday, 12 October 2015, during a CODART study trip in the American Midwest, at the Detroit Institute of Arts, that she found herself facing Vrel’s Interior with a Woman Combing a Little Girl’s Hair (fig. 2). That she saw it at all was thanks to Bernd Ebert, Curator of Dutch and German Paintings at the Alte Pinakothek in Munich, who was preparing a monographic exhibition of Vrel. Because of his interest in Vrel, the painting was drawn to the attention of the participants in the study trip. 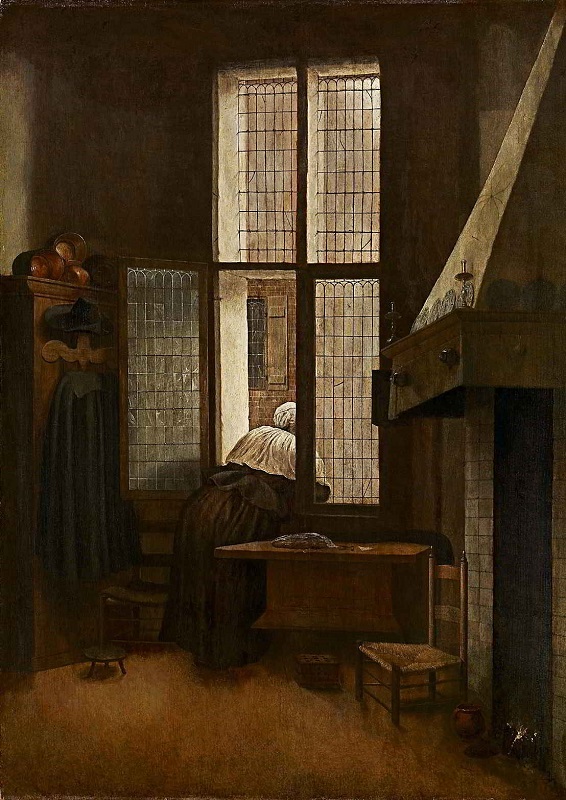 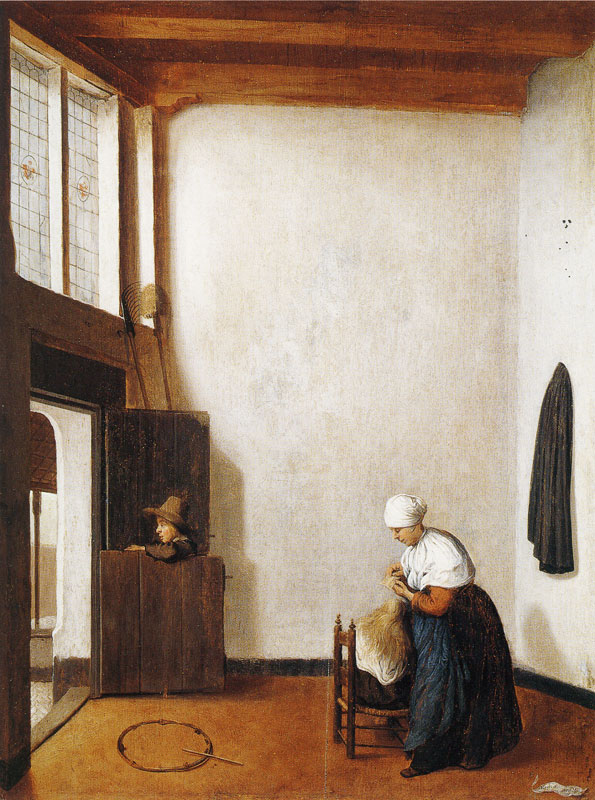 Interior with a Woman Combing a Little Girl’s Hair has a typical Vrel composition: it shows us three walls of an interior, like a kind of peepshow. The white-plastered walls of the strikingly high room make a sharp contrast with the warm tones of the floor, exactly as in another painting by Vrel in a European private collection (fig. 3). This work, which resurfaced only a few years ago, was sold at auction in Paris in 2013, fetching a hammer price of 1.8 million euros, a world record for Vrel. It is executed on a panel of almost exactly the same dimensions as the painting in Detroit and depicts a woman reading, seated on a chair in front of a window. The rest of the room is empty, in sharp contrast to the floor in the Detroit painting, on which we see the stick and hoop in the foreground of the girl whose hair is being combed by a woman. In the approximately fifty works by Vrel that are still known today, we encounter so many similar women in dark-colored skirts, with bright white shawls draped over their shoulders and white caps, that they can almost be seen as his trademark. Another striking feature of this artist is the way in which he signed his paintings, on a scrap of paper that has ostensibly fallen to the floor. Besides its appearance in the panel already referred to in a private collection, this scrap of paper features more prominently in the well-known painting in Paris, where it is preserved as part of the magnificent Frits Lugt Collection, managed by the Fondation Custodia (fig. 4). In this slightly smaller painting, a woman leans forward on her chair in an effort to make contact with a child who is on the other side of the dark window—a highly unusual motif also visible in A Woman Reading. 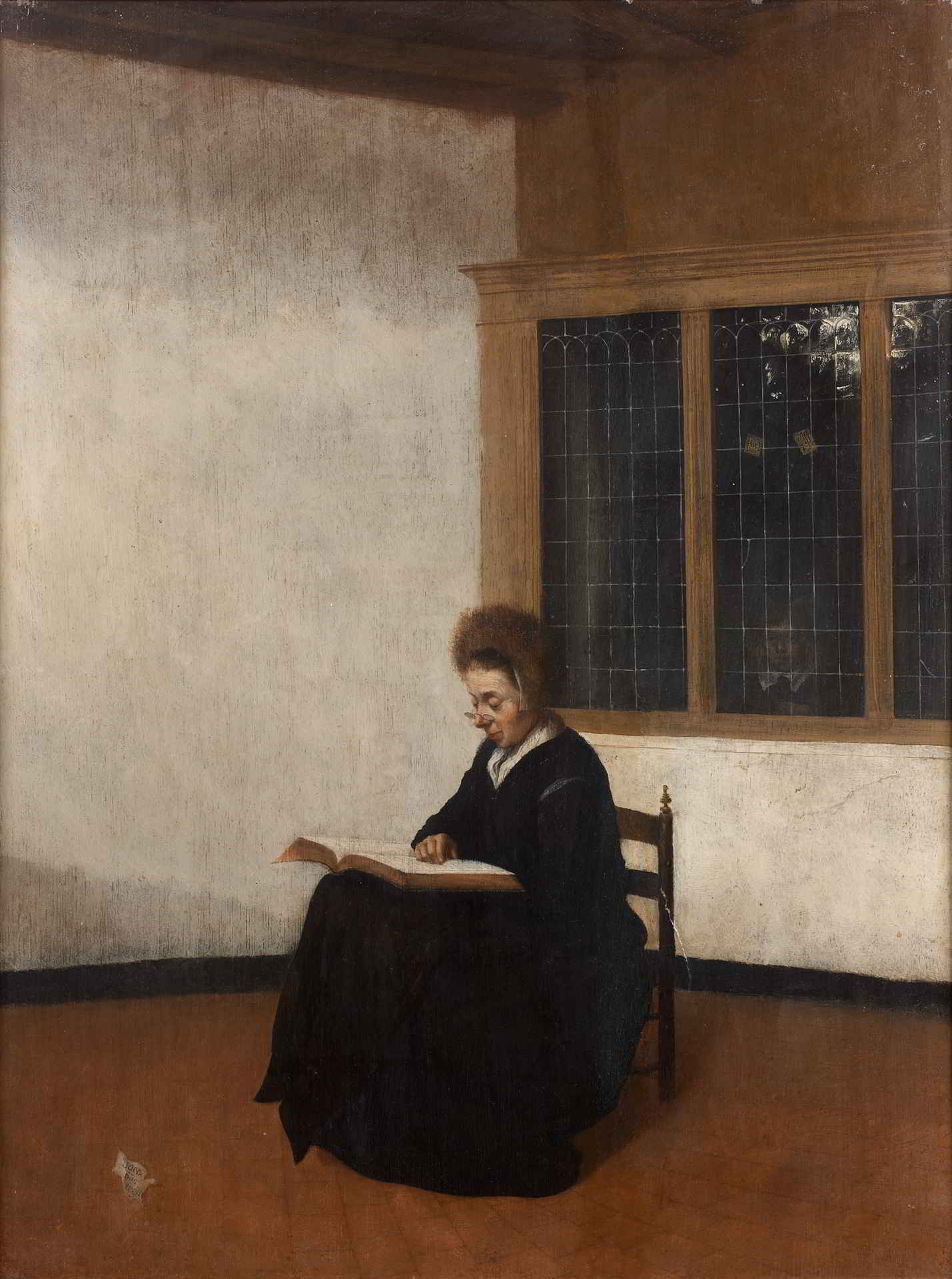 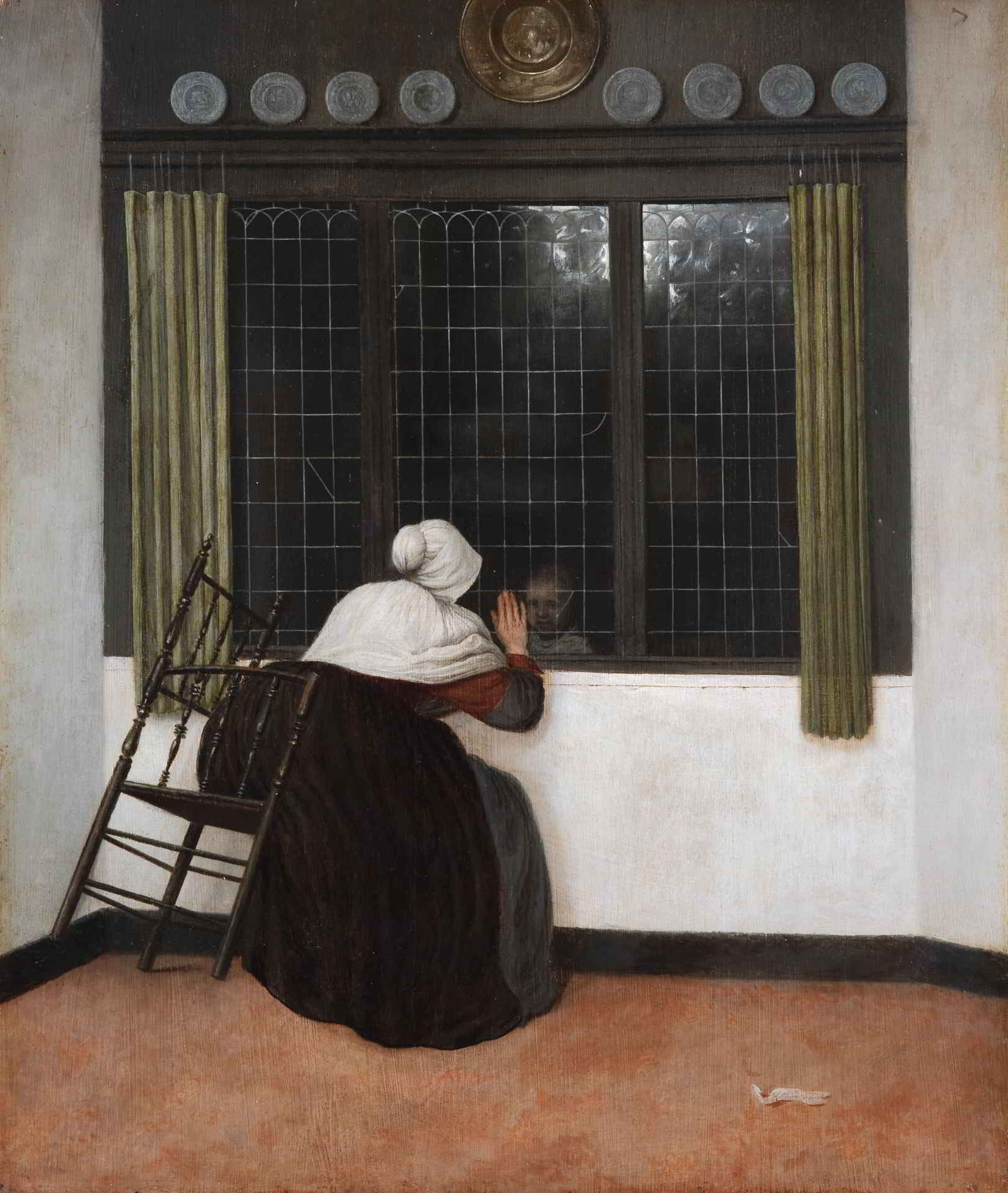 While most of Vrel’s interiors contain at most two figures, the scene in Detroit has three. The woman’s attention is totally taken up with her daughter, but a second child is standing at the entrance to the house—a Dutch door. The door is open and the boy is in between the two open parts: his body is concealed from view by the lower section, but we see his face and arm in front of the upper part. The open door provides a glimpse of the street, an element that Vrel chose as his primary motif in many of his paintings: besides genre scenes that are set inside the house, Vrel produced numerous street scenes, which always include multiple figures (fig. 5). That Vrel’s little streets as well as his interiors were popular among buyers at the time is clear from the fact that Vrel repeated some of them: it is truly remarkable that some scenes exist in two, three, or even four versions. These replicas are of variable quality, and the observant viewer will detect numerous differences between them in matters of detail. 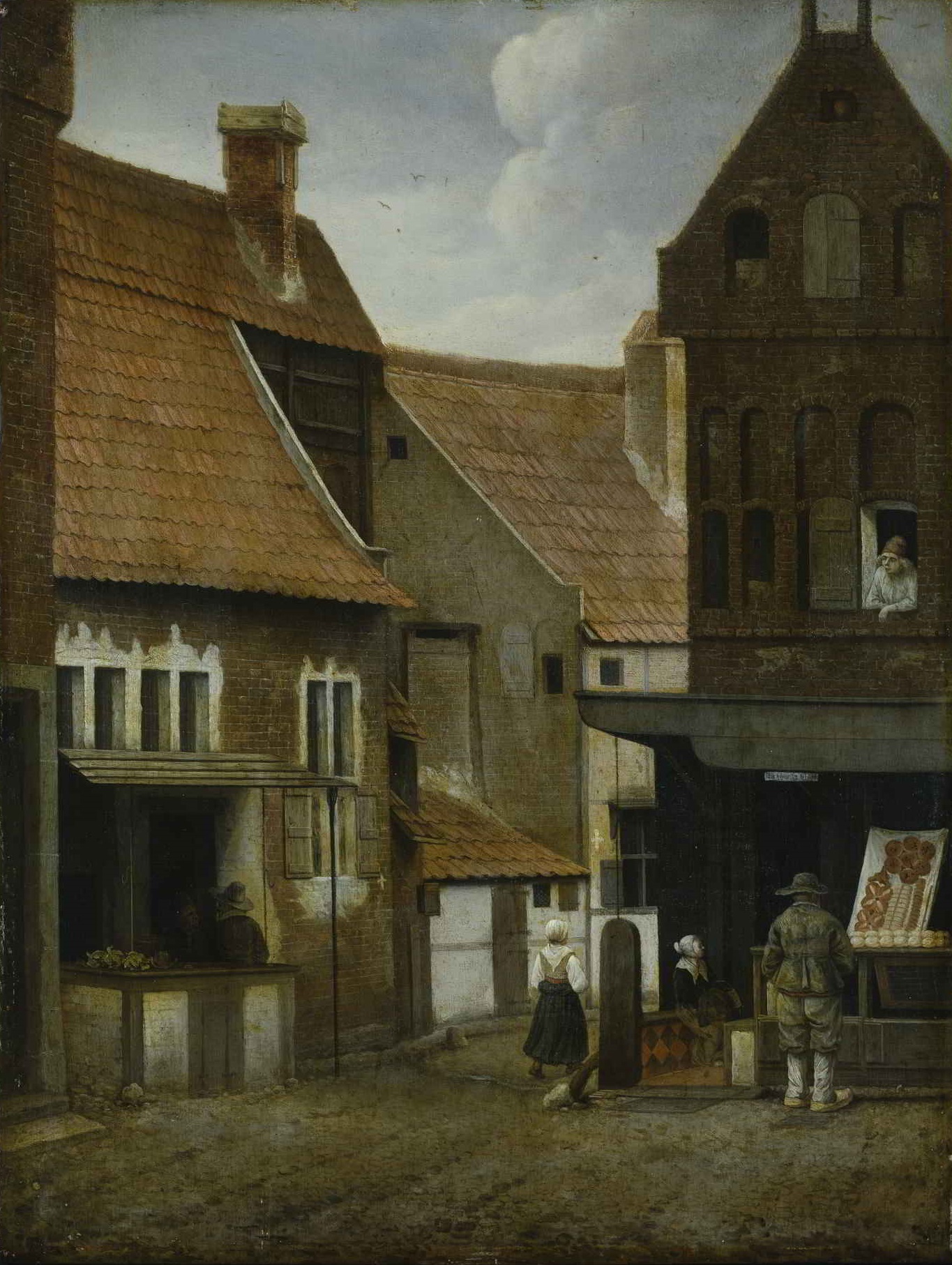 We can read what it was about the Detroit painting that moved Gerdien so profoundly in the blog she keeps on her site, in a post of 6 December 2015, after her return from the study trip. Under the heading “The Year of Half-Things,” Gerdien captures the essence of what studying a painting can do to you: “Even more than to the woman holding the comb in her hand, my eye was drawn to the white wall, the coat on the right and its shadow, the hoop, and the cloth on the ground—not placed there casually, but playing a crucial role in the painting’s tension. I kept looking at it, and I’m looking at it now, on my laptop screen, trying to recapture that feeling for a fraction of a second.” She was referring to those moments when seeing a painting transports you from the here and now, gives you the sense of things coming full circle—in other words, an almost Proustian experience.

Leaving the subject of the details in Vrel’s painting, I want to say a few words about Gerdien herself. On that trip we got to know each other better. As with most CODART activities, we studied artworks with other participants, discussed attributions, restorations, new ideas for exhibitions: in short, we talked about art. There were also opportunities for other exchanges during those many bus trips from one Midwest city to the next, and the most open-hearted conversations took place over drinks at the informal gatherings towards the end of the evening. It struck me that Gerdien (whose diplomatic skills are well-known to all of us) was always able to create a special atmosphere at moments like that, in which it was possible to talk openly about whatever came to mind, including matters of a more personal nature.

The CODART study trip was a wonderful experience, and besides leaving me with warm memories, it also yielded a concrete result. Bernd Ebert’s enthusiasm for Vrel was so infectious that the monograph exhibition will be displayed not only at the Alte Pinakothek, but also at the Mauritshuis, after its second showing in Paris at the Fondation Custodia, proud owner of Woman at a Window Waving at a Child. Together with Custodia curator Cécile Tainturier, Bernd and I have been working together closely on the exhibition for some time now. Three institutions—in Germany, France, and the Netherlands—are joining forces for this project, entirely in the spirit of CODART. I hope to have many opportunities to see and talk to Gerdien in the future: if that cannot be arranged in the short term, I’m sure it will be possible at one of the openings of the Vrel exhibition, in Munich, Paris, or The Hague!

Quentin Buvelot is Senior Curator at the Mauritshuis in The Hague. He has been a member of CODART since 1999.