Aditorium of the Wallace Collection

This article was originally published in the CODART eZine, no. 6 Summer 2015.

The theme of the eighteenth CODART Congress, Curators and the Art Trade: A Discussion of Opportunities and Dilemmas, was timely and relevant for those working in the art world, particularly those representing the public sector. The Congress, organized in collaboration with the National Gallery and The Wallace Collection, attracted to London over one hundred professionals from around the world.

To welcome delegates arriving in the city on Sunday, 18 January, an optional art dealer tour and city walking tour were offered, followed by a drinks reception hosted by the Old Master paintings dealer Johnny Van Haeften. 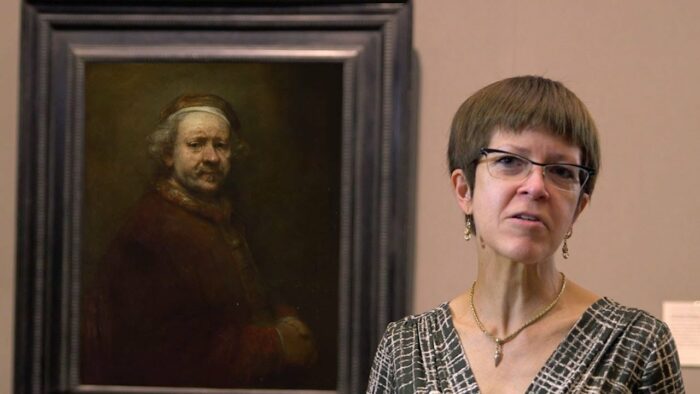 The following day the CODART Achttien Congress program kicked off in fine style with a private view of the Rembrandt: The Late Works exhibition in the Sainsbury Wing of the National Gallery. The de-installation was postponed to allow CODART members exclusive access to the exhibition to catch a final glimpse of some of the finest examples of the master’s later period. In the first session of the morning, Betsy Wieseman, Curator of Dutch and Flemish Paintings at the National Gallery and the exhibition’s curator, gave us great insight into the process of curating the exhibition and the challenges she faced in delivering an Old Master exhibition that was relevant and appealing to the general public.

Michael Ripps, an independent scholar from Los Angeles, gave the second keynote lecture, Wilhelm Bode and his Loyal Lieutenants: The Trade in Dutch Pictures, 1879-1914, and provided an overview of this extraordinary art historian and curator. Focusing on the key Dutch acquisitions made by Bode for the Gemäldegalerie, Ripps also discussed the dynamics between private collectors, dealers and public institutions in the nineteenth century. 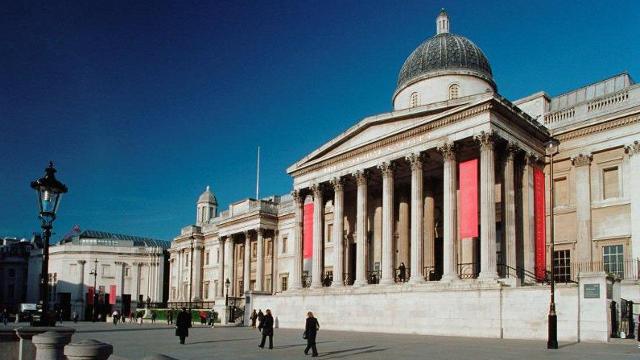 The afternoon session at the National Gallery comprised three speakers providing statements on the Congress theme. Jan Six, Director of Jan Six Fine Art, presented a captivating, object-based paper concerning attributions, focusing on the case of the painting of St. Praxedis, which recently sold at auction as an early work by Johannes Vermeer. Nanne Dekking, Vice-Chairman and Worldwide Head of Private Sales for Sotheby’s, questioned the role of scholarship and the narrative relating to artworks on the market. The final statement by Stephanie Tasch, Director of the Kulturstiftung der Länder, Berlin, spoke about the role of funding bodies and foundations that support the acquisition of artworks and objects by public institutions.

The day’s program was stimulating and informative, yet the round-up discussion was less lively than expected and there was a distinct air of caution when debating the challenges faced by curators and art market professionals, with individuals perhaps lacking the confidence to speak up for fear of misrepresenting their museum. Perhaps this could have been remedied by the formation of smaller discussion groups to foster debate on this sensitive subject.

On Monday evening CODART hosted a delightful dinner at the Bombay Brasserie, where colleagues enjoyed meeting new contacts, thanks to the raffle-style seating plan. The evening was made all the more enjoyable by the good food and wine and the popular speeches, welcoming new members to CODART and saying goodbye and good luck to those moving on to new ventures. 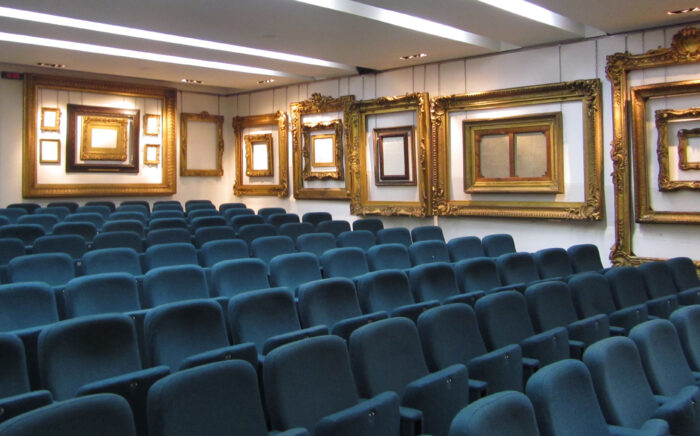 Aditorium of the Wallace Collection

The second day of the Congress began at The Wallace Collection with a welcome by Lucy Davis, Curator of Old Master Pictures at The Wallace Collection. An Van Camp, Curator of Dutch and Flemish Drawings and Prints at the British Museum, acted as the chair for the morning and introduced the popular Column by CODART Director Gerdien Verschoor, which addressed the changes CODART has made in its effort to adjust to budgetary challenges. Thomas Leysen, Chair of the Friends of CODART Foundation, also spoke about the work of CODART’s Friends and Patrons and encouraged members to make their contacts aware of the scheme.

The next session, Speakers’ Corner, gave members the opportunity to take the floor and present, for the delegates’ consideration, a particular problem or query relating to their work or research, in the hope of receiving suggestions or advice. Robert Wenley, Deputy Director and Head of Collections and Learning at the Barber Institute of Fine Arts, University of Birmingham, focused on his forthcoming exhibition on Jan Steen and asked for ideas about the identity of the patron of Jan Steen’s The Wrath of Ahasuerus in The Barber Institute Collection. He also discussed his theory that the composition was possibly influenced by contemporary Dutch theatre. Wolfgang Cillessen, Curator of Paintings, Prints and Drawings at the Historisches Museum, Frankfurt, sought information on any surviving examples of German “master pieces” – the tests of workmanship needed to gain admission to a guild – for a future exhibition. The second round of speakers included presentations by Piotr Borusowski, National Museum Warsaw, who asked for opinions regarding a sketchbook attributed to Cornelis Saftleven; Andrew Moore, The Attingham Trust, who presented a fascinating research and exhibition project on “The Paston Treasure”; and Gero Seelig, Staatliches Museum, Schwerin, who made a case for establishing an international collaborative database on historic frames. Given the responses from the audience, the Speakers’ Corner appeared to be a successful and constructive addition to the Congress program. 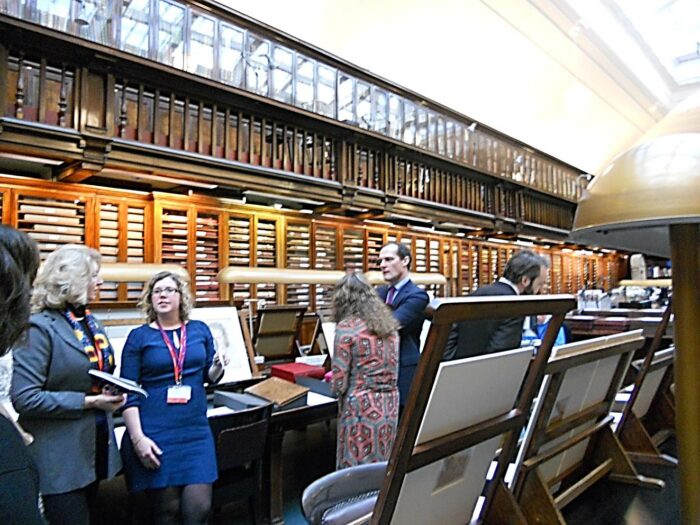 For the afternoon session, participants had pre-selected from a varied list of in-depth visits, organized by CODART, to museums and collections. It was not easy to choose, but I opted for the visit to the Prints and Drawings Collection of the British Museum, hosted by An Van Camp. Initially attracted by the opportunity to view Anthony van Dyck’s Italian sketchbook, I was in awe of the other treasures that An brought out to show us. She presented a wonderful selection of highlights from her forthcoming silverpoint exhibition, mounted in collaboration with the National Gallery of Art, Washington, including an exquisite drawing of a dog by Albrecht Dürer, dated to 1520.

I was delighted to have the opportunity to view an album of watercolor studies by Adriaen van de Venne, including one drawing that featured Elizabeth of Bohemia and her husband, Frederik Hendrik, on horseback, which was particularly relevant to my area of research.

The day was rounded off by a drinks reception hosted by Sotheby’s, London, which gave the delegates a chance to relax over a glass of wine and to discuss the afternoon visits, and the opportunity to network with colleagues and researchers in an informal setting. 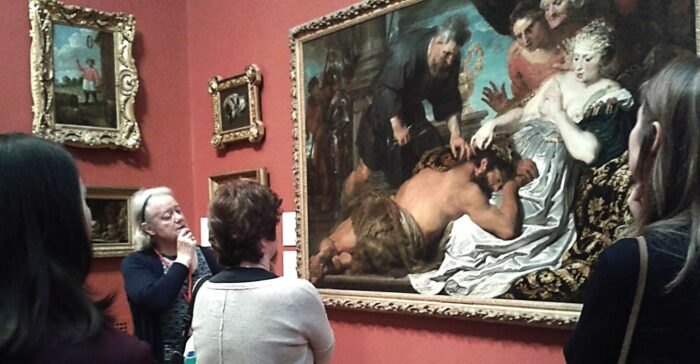 For the final day of the Congress, CODART organized an optional program of visits to museums and galleries around London, including the Queen’s House, Greenwich, Kenwood House, the private collection of Willem Baron van Dedem and the Royal Academy. I opted for the excursion to the Dulwich Picture Gallery, the world’s first purpose-built public art gallery. We were welcomed by Ellinoor Bergvelt, Guest Curator, Xavier Bray, Chief Curator, and Hettie Ward, Curatorial Fellow. Ellinoor provided great insight into the research she is conducting for the catalogue of Dutch and Flemish pictures at the Dulwich Picture Gallery. She encouraged the group to study the paintings and discuss topics such as attributions, compositional sources and costume identification.

The extra program proved popular with many of the delegates, who relished the opportunity to participate in additional excursions before traveling home.

Kate Anderson is Senior Curator of 16th and 17th Century Collections at the Scottish National Portrait Gallery, National Galleries of Scotland. She has been a member of CODART since 2012.