Participants CODART ZEVENTIEN congress in front of The Nightwatch. Photo by Paul Ridderhof

This article was originally published in the CODART eZine, no. 4 Summer 2014.

The CODART ZEVENTIEN Congress focused on problems and questions related to the presentation of collections. In all of the lectures, gallery visits and discussions, this focus revealed the tensions and possibilities in such topics as the desire to expand audience access to information, the role of technology in museums and the potential for digital engagement, various methods of presenting museum collections in the twenty-first century, and the roles of both curator and visitor in museum interpretation and audience engagement.

Nearly 140 participants from twenty countries attended the congress. On Sunday, March 16, after optional walking and boat tours of the city, the participants met at the Museum Van Loon for the opening reception, at which they were welcomed and introduced to the new CODART members in attendance. 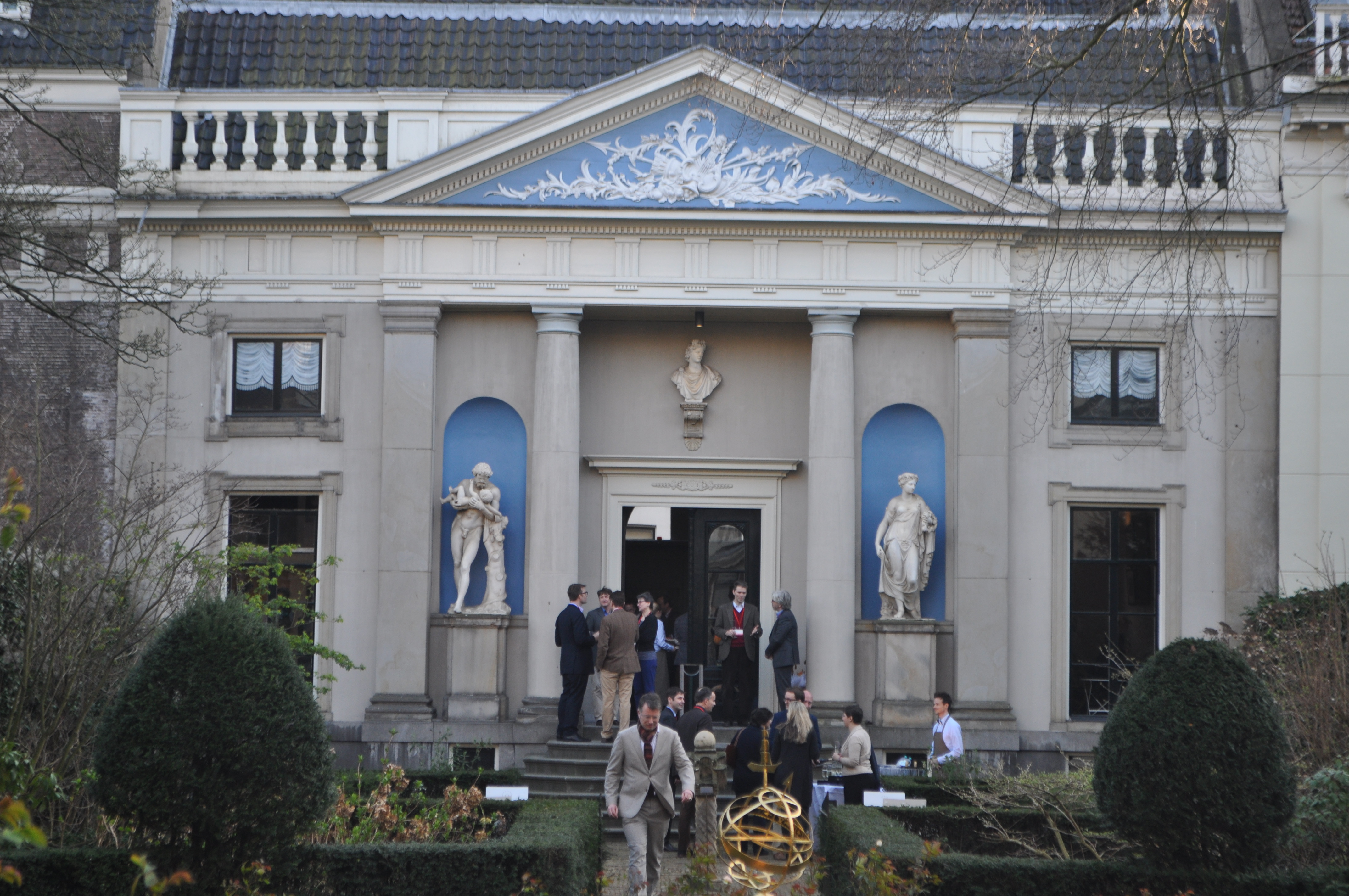 The Garden and coach house of Museum van Loon

The Rijksmuseum hosted the second day of the Congress on Monday, March 17. Taco Dibbits (Director of Collections, Rijksmuseum) delivered welcoming remarks, and Tico Seifert (Senior Curator of Northern European Art, Scottish National Gallery), chair of the session, introduced the program. The keynote lecture by Krzysztof Pomian (Scientific Director, Museum of Europe), titled “Museum Art Exhibitions: Between Aesthetics and History,” traced the history of the presentation of museum collections from aesthetically informed installations to the era of galleries arranged around national schools, individual artistic “geniuses” and chronology. He then pointed out the difficulties that arise when one attempts to look at art through the lens of social history in a museum context.

Taco Dibbits then presented a talk titled “Playful Simplicity: The Renovation of the New Rijksmuseum.” The re-imagination of the Rijksmuseum began by considering the original purpose of the institution. Dibbits explained that the goal of the renovation was to take Cuypers’s architecture into the future by reopening the floor plan of the museum and showing the historical collection together with the fine arts, with a view to creating a mixed display of objects grouped around such themes as place of origin, chronology, subject and provenance. 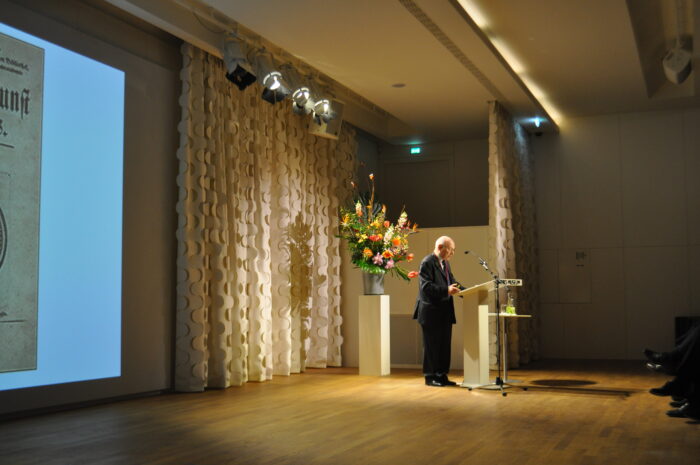 The next keynote lecture was delivered by James Bradburne (Director General, Fondazione Palazzo Strozzi). In “Collecting our Thoughts: The Palazzo Strozzi as Research Laboratory,” Bradburne spoke about the Palazzo Strozzi’s study of visitors’ experiences and its aim of staging international, high-quality cultural events in an attempt to induce local audiences to return repeatedly to the palazzo. Each exhibition, which is treated like the opening of a new museum, is based on the criteria of creating new knowledge, restoring works of art, and transforming visitors. In designing installations, the program aims to encourage visitors to spend more time looking at the artworks and to listen to new voices in addition to that of the curator (including labels written by children), and to enhance affective learning.

The afternoon program included guided tours by the curators of the Rijksmuseum’s various collections. After the tours, the session began with a presentation by Jane Turner (Head of the Print Room, Rijksmuseum), “Museum Labels: Bridging the Gap between Curators, Editors and Educators.” Turner argued for greater collaboration between museum curators and educators in creating labels. Her recommendations, based primarily on her experience of editing 7,500 new labels for the Rijksmuseum’s reopening, include maintaining the museum’s authoritative voice but providing thorough explanations to avoid the confusion created by jargon. Above all, she advocates working as a team to improve the final product.

In the following presentation, “Back to the Future: Objects, Design and the Visitor Experience at the V&A,” Kirstin Kennedy (Curator of Applied Arts, Victoria and Albert Museum) explained the philosophy behind the museum’s ongoing reinstallation projects, focusing on the reopening of the Medieval and Renaissance Gallery in 2009. The thirteen-year project has no uniform design aesthetic; instead, various designers have been asked to reveal the original architecture and make use of natural light whenever possible, while highlighting important objects in the collection. Project teams engage extensively with various members of the community (including academics, volunteers, and school and visitor groups) to create galleries that feel like theme-based exhibitions.

The final paper of the afternoon, “The Museum as a Laboratory of Aesthetics,” by Ulrike Surmann (curator, Kolumba, Art Museum of the Archdiocese of Cologne), introduced Kolumba’s innovative approach to the display of its collection. The museum challenges visitors to engage with artwork in a primarily aesthetic way by juxtaposing contemporary works with pieces from the archdiocese’s historical collection, and forgoing labels and other didactic material in installations that change annually. The juxtapositions allow for multiple points of departure for visitors’ experiences of the artworks, in an ongoing conceptualization of the museum as a visual laboratory.

After the conclusion of the day’s proceedings, attendees were treated to a private tour of the Rijksmuseum’s seventeenth-century collection, followed by dinner at NRC Restaurant Café.

The morning session at the Rijksmuseum on Tuesday, March 18 began with a welcome from chair Chris Stolwijk (director, RKD), followed by an update on CODART’s activities by director Gerdien Verschoor. Yao-Fen You (Assistant Curator of European Sculpture and Decorative Arts, Detroit Institute of Arts) then gave a short update on the continuing implications of Detroit’s bankruptcy for the DIA and recent developments to safeguard the collection.

After lunch the participants were taken on excursions that included an in-depth tour of the Rijksmuseum, the conservation department of the Rijksmuseum, the Jacob van Oostsanen exhibition at the Stedelijk Museum Alkmaar, the National Maritime Museum, the Rembrandt House Museum, and the Special Collections of the University of Amsterdam. The CODART ZEVENTIEN Congress concluded with a farewell reception at the Amsterdam Museum and a private visit to the Jacob van Oostsanen exhibition. 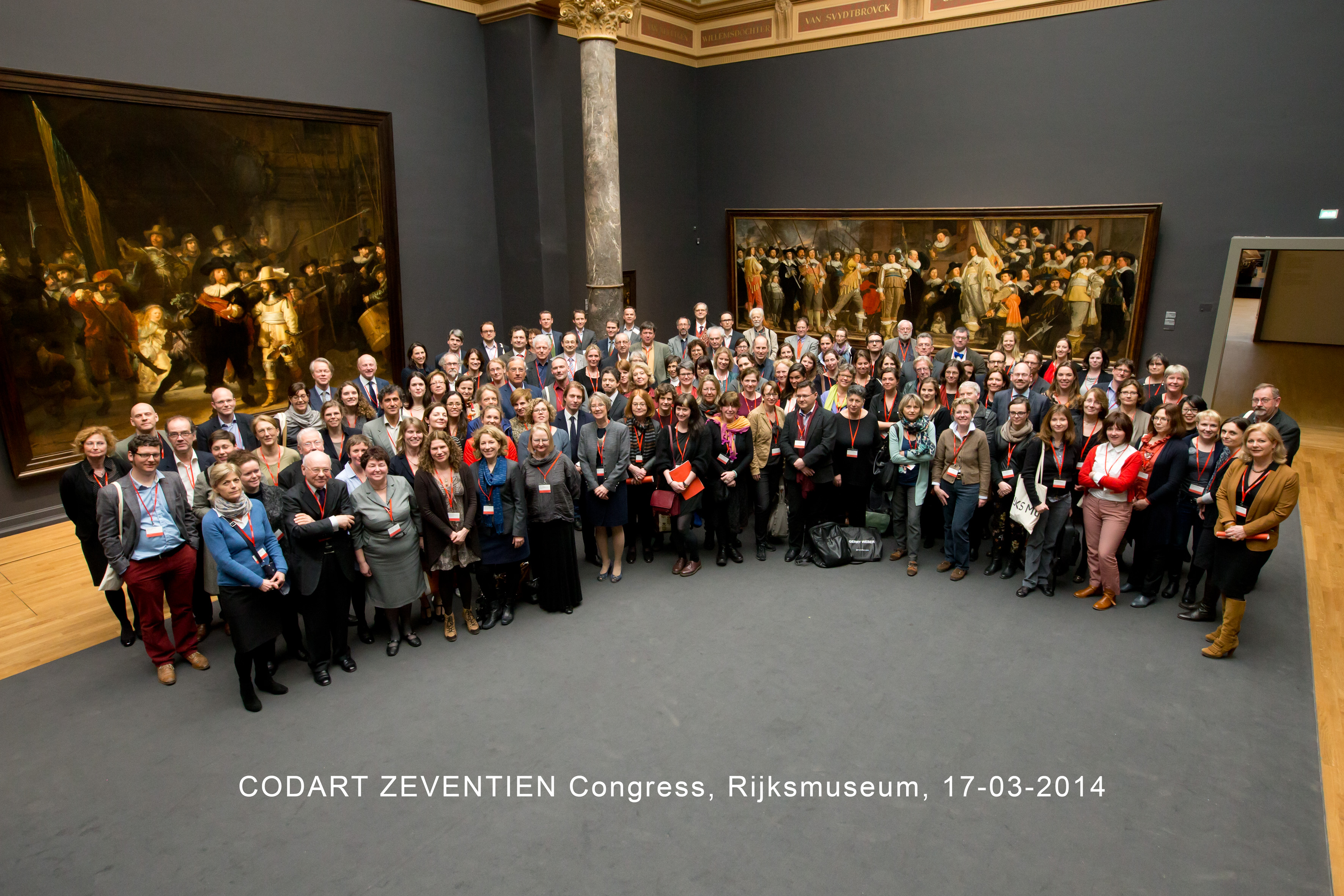 Participants CODART ZEVENTIEN congress in front of The Nightwatch. Photo by Paul Ridderhof

On a personal note, as a first-time congress attendee, I found the topics presented extremely relevant to issues that have arisen in my own professional experience. The congress was a valuable opportunity to become acquainted with curators both from American institutions closer to my own museum, and from museums that are much farther afield both geographically and programmatically. The opportunity to view and discuss installations with experts was an enlightening experience. I left the conference with many new ideas that will inform my own curatorial practice.

Rebecca Long is Associate curator at the Indianapolis Museum of Art. She has been a member of CODART since 2014.