With holdings in total of approximately 230,000 works, the Graphic Art Collections of the Klassik Stiftung Weimar are among the most important of their kind in Germany. The Graphic Art Collections are comprised of three large holdings. The former Grand Ducal Collection of Prints and Drawings (Kupferstichkabinett) represents the core of the collection, containing examples of every drawing method and printing technique. It includes some 35,000 hand-drawn illustrations and works by masters such as Leonardo da Vinci, Rubens, Munch and Rodin. The collection also includes 140,000 prints, with important works by the Italian chiaroscuro artists, and a practically complete body of graphic art by Dürer, Lucas Cranach the Elder and Rembrandt. The second important holding in the Graphic Art Collections is Goethe’s private art collection – more than 9,000 prints and over 2,000 drawings. The collection includes works by Altdorfer, Parmigianino, Guercino, Tintoretto, Rembrandt, Bloemaert, Tiepolo, Lorrain and Watteau. Goethe himself enjoys a special status in the Graphic Arts Collection with some 2,100 of his own drawings. The third major holding of the Graphic Art Collections consists of over 40,000 works of graphic art belonging to the Goethe National Museum, founded in 1885. These primarily focus on the Goethe era and all aspects related to this period of Weimar’s cultural history until the present day. 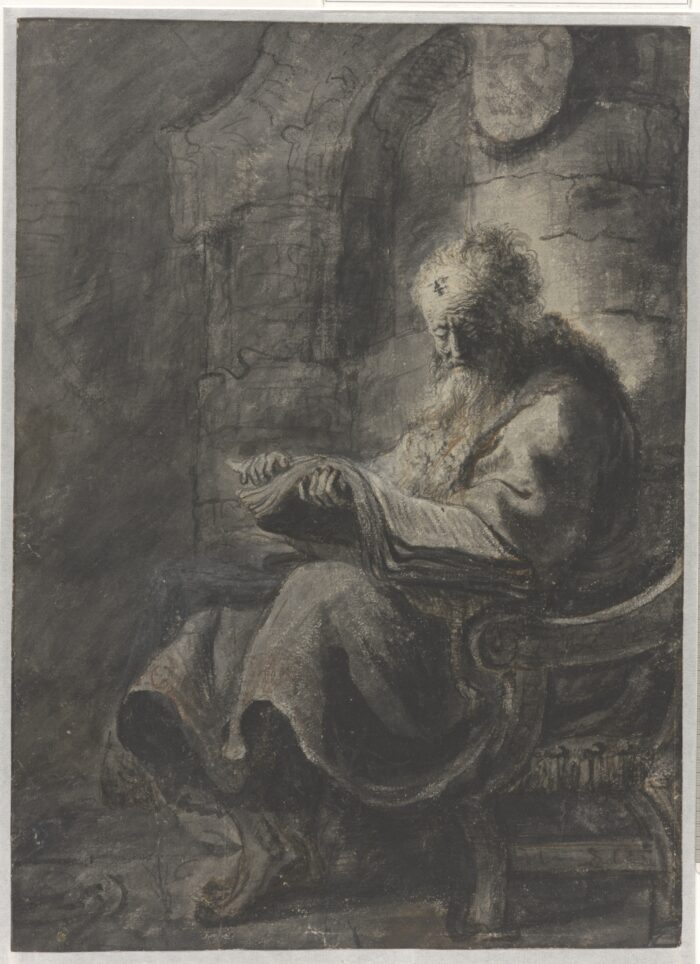 With over 1,500 Dutch and Flemish drawings, the Weimar Collection of Prints and Drawings is one of the most extensive and important collections in this category outside of the Netherlands. The drawings, which originate from the collections of Johann Wolfgang Goethe and the former Grand Ducal Collection,1 had not yet been comprehensively catalogued. To remedy this, the project “Connoisseurship Today“* was launched in November 2018 (and ran until October 2021), with the aim of making these drawings fully accessible online. At the end of 2022, an anthology with individual case studies on the results of the Weimar research project will be published. In addition, the research database will be linked to the museum database and made accessible online, along with the measurement results of the material analyses. For this project, it was decided to place the stylistically critical treatment of selected drawings on a more objective basis by using scientific methods such as multispectral analysis and X-ray fluorescence analysis of the materials. These non-destructive material-scientific methods of investigation make it possible to differentiate between the drawing materials and the papers used. One of the areas singled out for special attention was a critical analysis of the drawings by Rembrandt as well as the anonymous Rembrandtesque drawings. Old Man Reading (Fig. 1), which was formerly regarded as an original Rembrandt drawing, serves as an illustration of the interplay between material analysis and stylistic criticism.

Old Man Reading: A satellite drawing in the Weimar collection

Cornelis Hofstede de Groot incorporated this drawing into his Rembrandt catalogue in 1906, when he proposed classifying it as an autograph work and linked it to the painting of a hermit in Paris, which was likewise considered at the time to be an original work by Rembrandt (fig. 2).2 Today, the small-format painting is regarded as a “satellite” (Ernst van de Wetering) by an anonymous collaborator. It is thought to have been produced in the Rembrandt workshop around the same time as Rembrandt’s Jeremiah, that is, around 1630/31.3 However, an etching by Rembrandt dating from 1631, which depicts the same model as Old Man Reading, should also be mentioned. The angle of the head is identical in the two works, albeit in mirror image (fig. 3).4 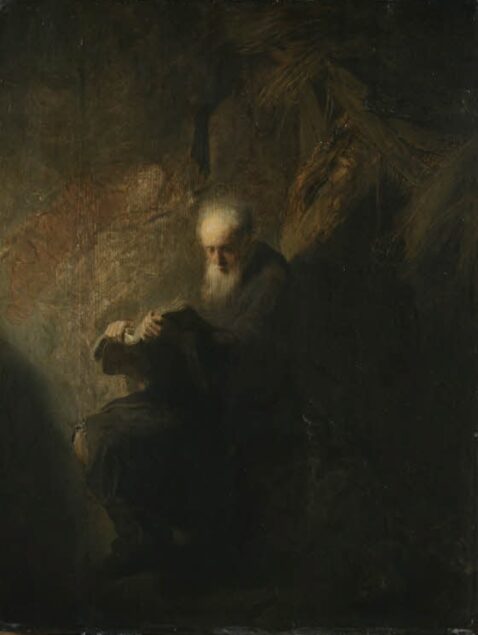 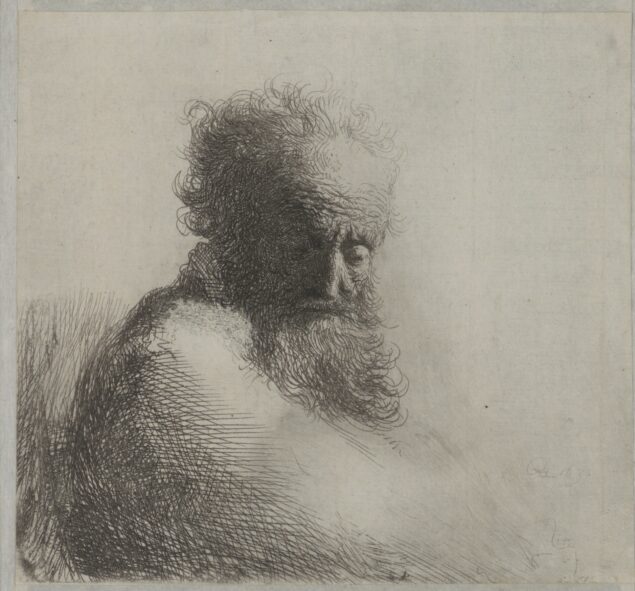 Otto Benesch, however, did not include Old Man Reading in his catalogue raisonné and instead attributed the drawing to Jan Lievens.5 The Rembrandt Research Project considered the possibility that a now lost red chalk drawing by Rembrandt may have served as the preparatory drawing6 for the three works – the etching, the painting, and the Weimar drawing, with its “rather mediocre quality.”7 Werner Sumowski, for one, endorsed the suggestion that the latter work was by Ferdinand Bol,8 which resulted in a later date being ascribed to Old Man Reading, since Bol was not active in Rembrandt’s workshop until the second half of the 1630s.9

In the case of Old Man Reading, material analysis has now helped to clarify the underlying characteristics in the handeling (manipulation of materials) of the drawing, which indicate an early date. This suggests it was produced around the same time as Rembrandt’s 1631 etching and the painting in Paris.

The initial examination of the sheet did not clarify the precise interplay between pen and brushwork or the subsequent application of wash and the final reworking. However, subsequent X-ray fluorescence analysis revealed a preliminary drawing in iron gall ink, which served as the underdrawing for the finished work (fig. 4). It is striking that this preliminary drawing indicates only a few prominent features in the head section – notably the right eyebrow, the bridge of the nose, and individual strands of head and beard hair – whereas the old man’s voluminous body has been drawn in considerable detail, using the same pen and iron gall ink. As far as the drawing process is concerned, this finding indicates that Rembrandt’s 1631 etching (fig. 5) was probably used instead as a preparatory drawing for the head. Not only does the etching depict the same model, but digital superimposition shows that the old man’s head is the same size as in the drawing. 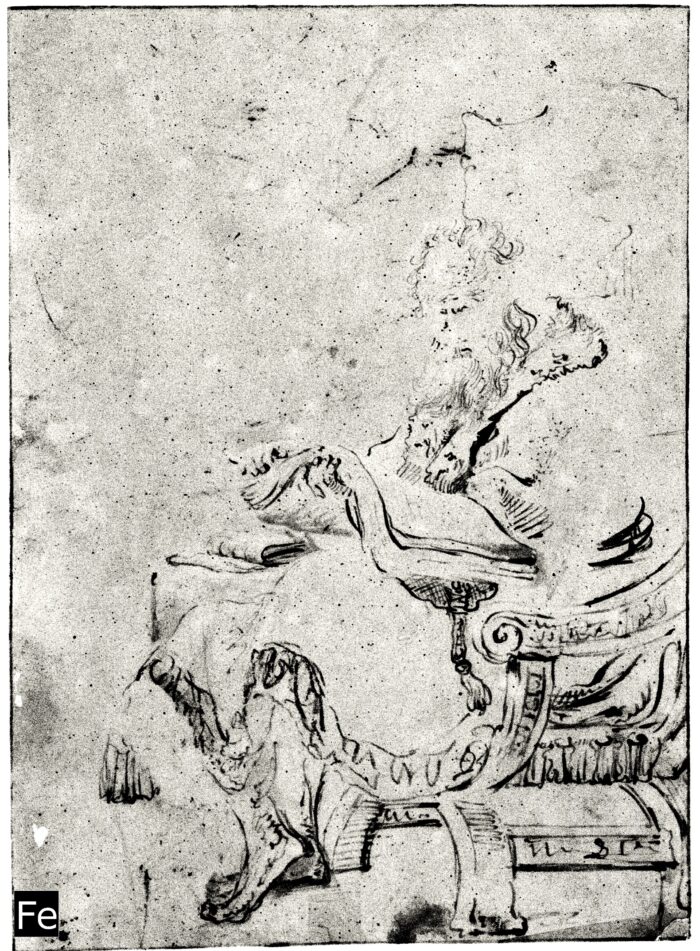 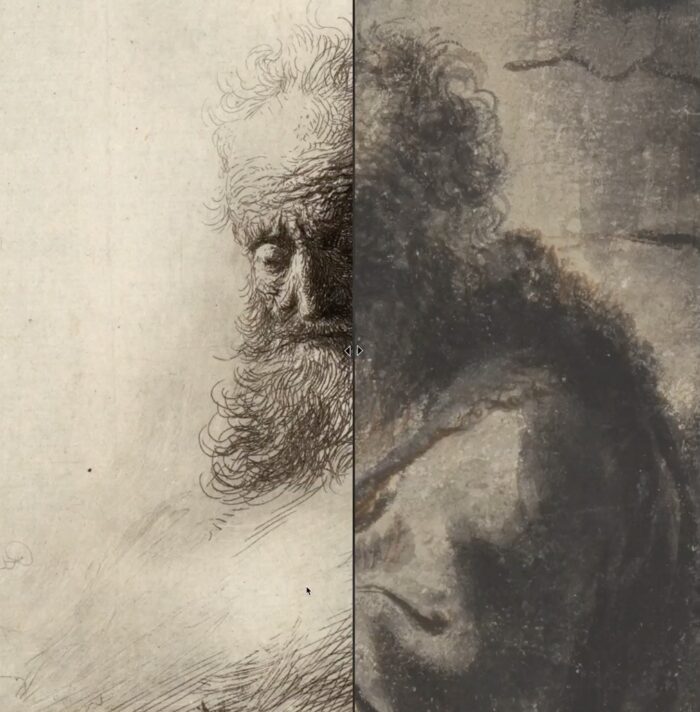 Our hypothesis is that during the transfer process, individual markings on the etched original were reproduced 1:1 with a pen, possibly with the aid of a counterproof, before embarking on a second stage, in which the artist carefully modeled the old man’s facial features after the original, using a brush and diverse tones of grey. The artist evidently sought to imitate the painterly effect achieved in the etching in the area of the wrinkled forehead by using a brush. Likewise, he reproduced precisely the brightly illuminated zones on the forehead and the bridge of the nose. Interestingly, the drawing consequently bears a close resemblance to a reworked etching of the bust of a bearded old man (first state) in the National Print Room (Rijksprentenkabinet; fig. 6),10 in which the curly beard hairs have been enhanced in pen and iron gall ink (reputedly by Rembrandt himself). Rembrandt’s self-portrait drawing from around 1629 in Amsterdam reveals a similar combination of brush reinforced with pen.11 This suggests that the combination of brush and pen to achieve certain aesthetic effects was a common practice in Rembrandt’s workshop. 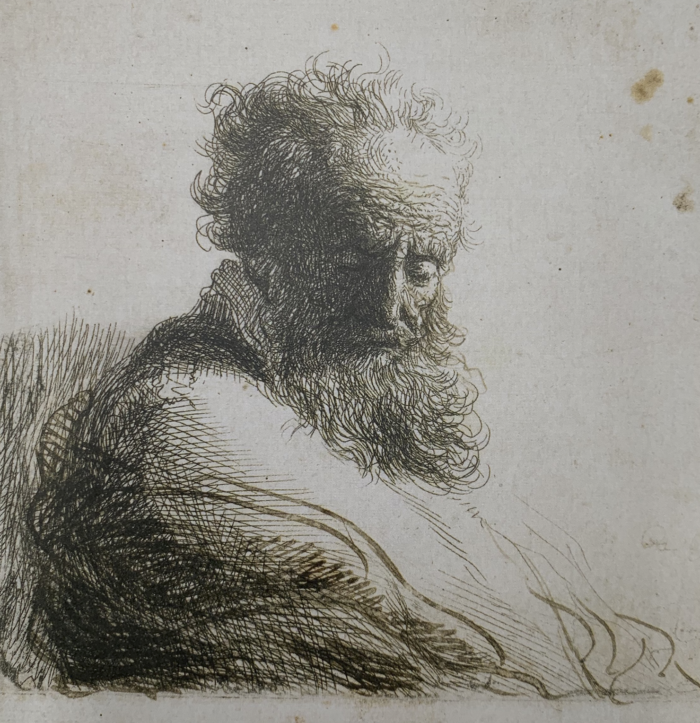 While the draftsman was able to refer to a model for the old man’s head, in the case of the body and its seated posture he either had to create his own design or to freely transfer it from the finished painting in Paris. The latter possibility seems likelier. At any rate, this assumption would explain the detailed preliminary drawing in pen and iron gall ink. Based on this preliminary drawing, the figure of the seated old man and the background were then further elaborated using a brush. The handling of the brush sometimes appears quite heavy, for example in the black lines representing the pages of the book and in the contours of his crossed bare feet.

What conclusions can be drawn from the observations made by material analysis with regard to relocating the Weimar drawing within Rembrandt’s workshop? The drawing Old Man Reading can be directly linked to one of Rembrandt’s etchings. We can assume that the etching served as the model for the drawing and not vice versa (since otherwise the drawing would have to be by Rembrandt). In addition, the head in the drawing was depicted using a combination of pen and brush, which Rembrandt himself used in other drawings to evoke the same aesthetic effects.

Taken together, these findings suggest that the Weimar drawing is closely linked to the production of both the etching and the painting in Paris as well as other drawings by Rembrandt from about 1630. In any case, Old Man Reading is certainly a “satellite” drawing – to use the term coined by Ernst van de Wetering – which must have been created around 1630/31.12 Furthermore, there are definitely stylistic reasons for linking this work to drawings now attributed to Jan Lievens.13 This would strengthen the case for Otto Benesch’s attribution to that artist. In any case, in returning the drawing to the complex of works associated with Rembrandt’s workshop, the question of authorship must be posed afresh, given the convincing grounds for rejecting the previous attribution to Ferdinand Bol.

12 We know very little about Rembrandt‘s workshop in Leiden and the identity of these artists.