When CODART asked us to write about the development of the exhibition Lucas Gassel: Master of Landscapes for CODARTfeatures (Museum Helmond, 10 March – 7 June 2020), it seemed the perfect opportunity to talk about the background and the events leading up to this remarkable project, the first exhibition ever to be dedicated to Gassel (c. 1488–1568/69), the artist from Helmond. Although Gassel is a familiar name to art historians as one of the earliest landscape painters in the Netherlands, very little is known about him.

Who could have foreseen that the entire project would take a bizarre turn through the measures introduced to prevent the spread of the Coronavirus? Although the first alarming reports started to filter through in the weeks immediately before the festive opening of the show on 8 March (both in the news media and from colleagues who had escorted the artworks to Helmond from European countries and North America) and the first cases of infection were being recorded in North Brabant, the province of which Helmond is part, the installation of the exhibition proceeded according to plan. The day after the opening, on Monday 9 March, we welcomed our first visitors: a group of fellow curators and other colleagues who had travelled to Helmond for a CODARTfocus gathering, partly to view the exhibition (in the Kunsthal) and partly to visit the fourteenth-century Helmond Castle, the other location of Museum Helmond. On Tuesday, 10 March, having received many positive initial reactions, Museum Helmond was ready to introduce the general public to Lucas Gassel and to the historical and artistic context in which this sixteenth-century artist lived and worked. Sadly, after just four days, at 5 p.m. on Friday, 13 March, the exhibition was obliged to close its doors to the public (fig. 1). 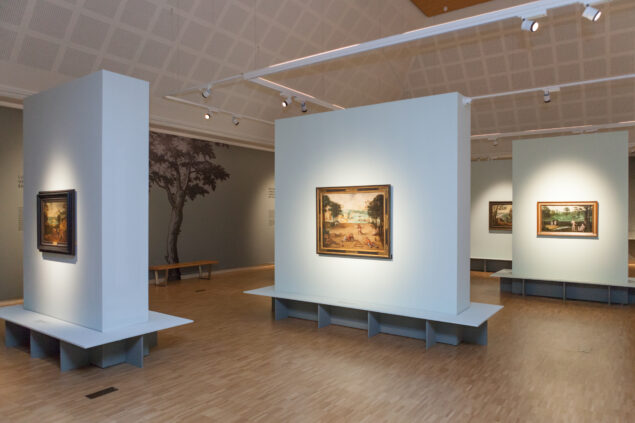 All this means that as we document our experiences here, we feel rather ambivalent about it. We have now been closed for over six weeks: an unprecedented situation that we share with many museums worldwide. As an exhibition project, Lucas Gassel van Helmond: Master of Landscapes has particular significance for the museum. It had long been anticipated; from the museum’s earliest days in 1982 (as Gemeentemuseum Helmond), the staff dreamed of one day putting on an exhibition on the landscape pioneer from their own city. That this ambition finally came to fruition in March 2020, after years of preparation – only to be forced to close down for the time being after only a few days – makes the present situation all the more unpalatable.

That the target of organizing the exhibition within 2½ years was an ambitious one was clear from the outset, partly because for a long time there was only one signed panel painting by Lucas Gassel in a Dutch public collection: The Flight into Egypt in the Bonnefanten Museum, on loan from the Cultural Heritage Agency (fig. 2). An added challenge was the fact that Museum Helmond, which employs just under fifteen full-time members of staff, has never organized an international loans exhibition of Old Master paintings before. 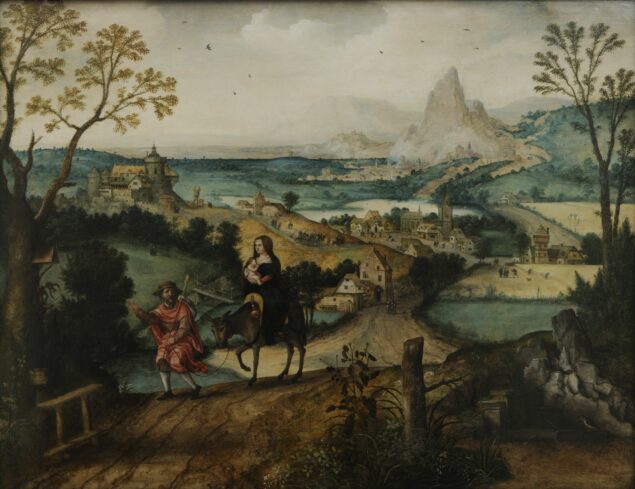 For the research and content of the exhibition and catalog, Anna Koopstra, a specialist on the subject of Netherlandish painting, was hired as guest curator. She contacted the diverse renowned institutes where some of Gassel’s key works were to be found and tracked down others in private collections so as to be able to study as many works as possible firsthand. Annemieke Hogervorst, curator of local history and of the collection ‘Men and Work’, art on the theme of the working men at Museum Helmond, acted as project leader.

The museum team was well aware that besides enlisting art-historical expertise, it would also need to hire staff such as a registrar and extra security. We also knew that a great deal of PR and marketing would be required if we were to attract visitors in large numbers to a show featuring this obscure sixteenth-century artist (with none of the stature of fellow Brabantine artists Jheronimus Bosch or Pieter Bruegel the Elder) at a museum outside the Randstad region. The costs incurred for all this, in addition to the international loans, the catalog, and the exhibition design, meant that the overall budget ended up being twenty times as high as the cost of an average exhibition at Museum Helmond.

While it was obvious to fellow curators that there was a need to clarify the importance of Gassel’s oeuvre, it was imperative to arouse enthusiasm among other external parties and to convince them that Gassel was an artist worthy of an exhibition project of this kind. A fundraising effort of unprecedented breadth was launched for the museum. This led to contributions from no less than fourteen funds and other sponsors, including the Rembrandt Society, who financed Anna Koopstra’s technical study of Gassel’s paintings through its Schoufour-Martin Fund, a contribution from the Turing Foundation for special international loans, a generous contribution from Helmond Municipality, and a substantial grant from the Brabant C investment fund. Thanks to their crucial support, it was possible to create an exhibition that would do justice to this unique opportunity to reconsider the artist Lucas Gassel.

As a result of this concerted effort, most of Gassel’s core oeuvre was brought to Helmond. The loans include Gassel’s earliest known signed and dated painting (1538) as well as his last known signed and dated painting (1550), from the Narodní Gallery (on loan from the Butta collection) in Prague (fig. 3). Other highlights of Gassel’s painted oeuvre, such as the Coppermine (from the Royal Museums of Fine Arts of Belgium), The Parable of the Weeds Among the Wheat (Phoebus Foundation, Antwerp), and Gassel’s characteristic Flight into Egypt can be seen together for the first time. A small group of drawings was procured on loan from the Kupferstichkabinett of the Staatliche Museen in Berlin, including the only two known signed and dated drawings by Gassel, dating from 1560 and 1568 respectively. Finally, in addition to the well-known series of five prints after a design by Gassel (published by the Antwerp publisher Hieronymus Cock), there is a second series of sixteen prints (published after 1570 by Cock’s widow). Gassel was involved in the design of this series, which therefore illuminates his activity in his final years. Around this core oeuvre, a group of works was brought together that can be attributed with some confidence to Gassel. These include a number of characteristic and interesting works of high quality that have not been seen for a long time in the Netherlands, such as the Landscape with the Penitent St. Jerome, now in Museo Soumaya in Mexico City, and for instance The Gardens of a Renaissance Palace, with Episodes from the story of David and Bathsheba from the collection of The Wadsworth Atheneum (fig. 4). These are supplemented by works by Gassel’s contemporaries (such as Joachim Patinir, Herri met de Bles, Cornelis Massys, and Pieter Bruegel the Elder) and unique historical objects, such as the earliest known map of Helmond by the cartographer Jacob van Deventer. Also included in the show are the handful of archival documents in which Gassel’s name is recorded. Altogether, the approximately eighty objects provide visitors insight into Gassel’s life, his career, the role of his workshop, and the significance of his oeuvre. 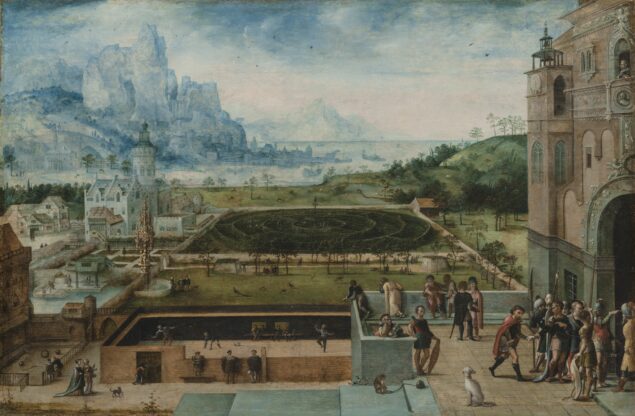 Several CODART members embraced the project from the start and shared their knowledge as ambassadors on behalf of the exhibition. We also want to thank CODART itself for its involvement, for instance by giving us an opportunity to present our project at Speakers’ Corner during CODART 21 in Bruges in March 2018. A painting that came to our attention as the direct result of that presentation – and that is not only on view as a loan but that we were also able to examine using infrared reflectography, with thanks to the colleagues at the Bruges Museums – is the Landscape with St. John the Baptist Preaching (fig. 5) from the collection of the Jean van Caloen Foundation, Loppem Castle. This painting was previously labelled as “Southern Netherlands”; in the exhibition, an attribution to Gassel is proposed. 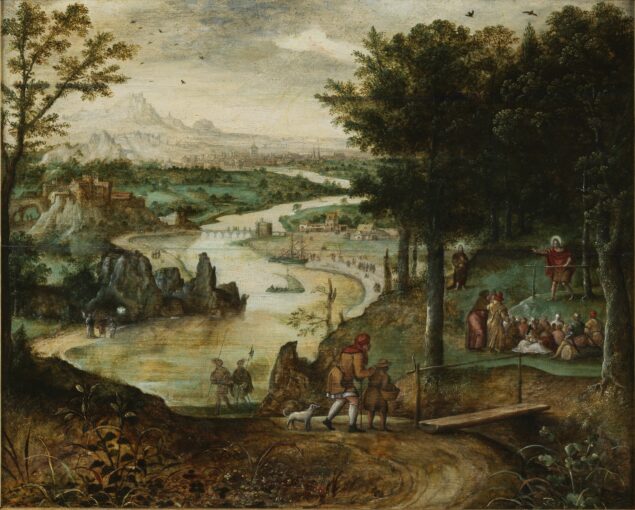 The temporary closure of the exhibition does not in any sense, of course, undo our work. In the exhibition catalog, published by Waanders & de Kunst (Dutch only), all of the objects and new research findings are brought together. Another major achievement was the purchase by Museum Helmond (partly thanks to the Friends of the Museum) of Gassel’s Landscape with the Sacrifice of Isaac, signed and dated 1539, a work that captured our attention in the course of the research (fig. 6). It was recently restored and will be given a permanent place in Helmond Castle after the exhibition. And even though the exhibition has not received the exposure initially anticipated, Gassel has not gone unnoticed. This is reflected in the various initiatives taken by the museum itself and by the press and other media, that have made it possible for people to catch a glimpse of the show online at home. 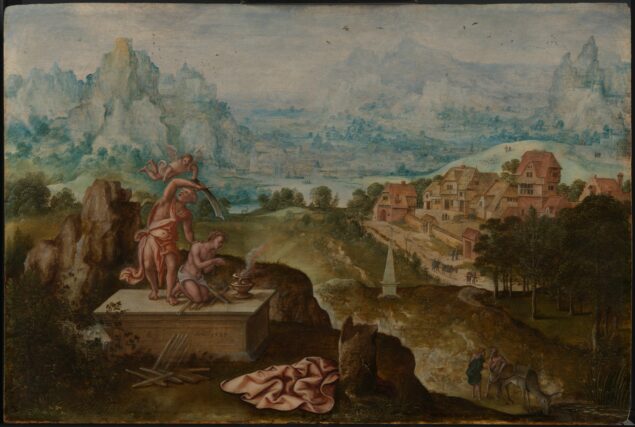 What is missing, however, is the influx of visitors and the pleasure of looking at and enjoying art together. We miss the dynamic energy of the full range of public activities and, for instance, the buzz of classes of schoolchildren, who can get to know the artist and his time in a playful manner in a large educational workshop area. In addition, of course, the loss of income has struck a painfully large hole in the financial resources needed to cover the costs, and is fast depleting the museum’s reserves.

At the time of writing, Museum Helmond plans to reopen the exhibition on 1 June and to extend it until 30 August 2020. We are grateful for the trust, again, of our lenders, most of whom understand the rationale and have lent their support to this plan. We therefore look forward to welcoming many visitors from the beginning of June with renewed enthusiasm as well as visitor guidelines, so that we can finally fully present the exhibition Lucas Gassel van Helmond: Master of Landscapes in the form for which it was designed: with visitors.

The museum offers short video tours (in Dutch) of the exhibition, guided by Anna Koopstra, on their YouTube channel. Find them here.

A virtual tour of Lucas Gassel of Helmond: Master of Landscapes (with texts in Dutch) can be found here.