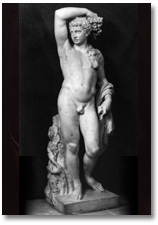 Continuing the previous Works of Art in Focus, which aim to focus the public’s attention on a single work or a small group of works that are normally kept in the storeroom, this high quality sculpture of Bacchus will be in long-term exhibition as from 18 July. Exhibited as part of the fiftieth anniversary celebrations of the Calouste Gulbenkian Foundation, the sculpture in question was executed in 1751 by Michael Rysbrack, a Flemish artist who worked in London and achieved great success during the first half of the eighteenth century.

This sculpture, which is hard to integrate fully into the discourse of the Gulbenkian Museum’s permanent exhibition and has consequently been kept in the storeroom, is a valuable complement to the exhibition Calouste S. Gulbenkian (1869-1955): The Collector and His Taste, which is open as from the same date in the Temporary Exhibitions Gallery on Floor 0 of the Foundation.

Calouste Gulbenkian mainly collected sculpture that was based on antiquity, partly as a result of his passion for art-forms from that period, as demonstrated by his outstanding collection of Greek coins. This work by Michael Rysbrack, an artist who drew his individual notion of the classical ideal from the Baroque period, is one of the most outstanding works in the collection assembled by Calouste Gulbenkian.