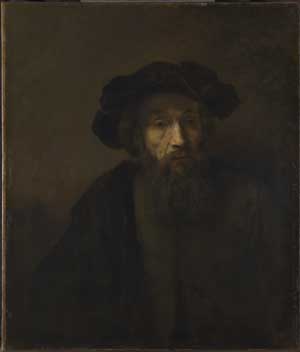 Period sources referred to paintings such as this work from London as “tronies”.
They were not commissioned portraits, but depictions of heads or half-length figures of anonymous studio models. Collectors valued such works as studies of a particular facial expression or role-plays in fictitious costumes.

The bearded man in the painting is first referred to as “a rabbi” in an inventory from 1844. It is conceivable that, like some of Rembrandt’s later models, he was a Jew; the artist lived in close proximity to the Amsterdam Jewish community between 1639 and 1659. Still, there is a lack of proof that the man is a rabbi or that his attire is Jewish in style. Rembrandt used the same old-fashioned cap in self-portraits beginning in the 1650s. The old man obviously served as a model for the artist between 1653 and 1661, as evidenced by his appearance in other prominent Rembrandt works, such as Aristotle Contemplating a Bust of Homer (The Metropolitan Museum, New York).

Rembrandt seems to have worked from life when painting this portrait, its life-size model rendered with a highly restrained technique and the sparing use of pastose effects. The only apparent outline correction was made to the contour line of the right arm, which the artist re-did after signing the painting. In the process, he partly obscured the last digit of the date. However, the style suggests 1657 as the likeliest year.

In the 1650s, Rembrandt painted a considerable number of half-length figures of this type for the open market. They are characterized by an indefinable dark background, brownish colours with faded contours and only a faint, localized illumination of the face. These features add to the vagueness and mysteriousness of the content. In the London painting, this quality culminates in the man’s contemplative and introverted expression; immersed in thought, he gazes, in a void, past the viewer. The thoughtful and meditative face offers an exciting comparison with Prague’s Scholar at a Table. This 1634 work, the only Rembrandt painting in the Czech collections, can be found in the same room.

The Age of Rembrandt and Frans Hals in the National Gallery in London and in the Mauritshuis in The Hague between June 27, 2007 and January 13, 2008.