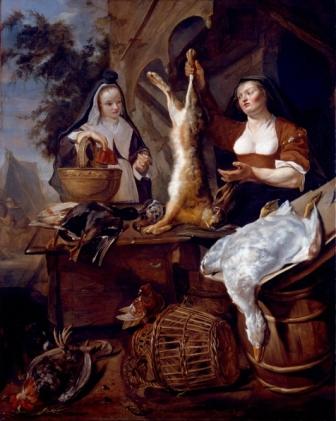 This exhibition celebrates the arrival at the Holburne – on loan from a private collection – of an exceptional painting of a market stall by Gabriel Metsu, one of the most intriguing artists of the Dutch Golden Age. It brings it together with another seventeenth-century still-life masterpiece and works which explore the same themes and ideas by Sam Taylor-Wood and Marc Quinn, two of the most celebrated artists of today.

Metsu’s painting (shown in public for the first time) is joined by the flamboyant Game-Stall by his Flemish contemporary Frans Snyders, the most spectacular painting of its kind in the country. Both paintings in their depictions of stalls piled high with dead game celebrate the descriptive possibilities of paint to depict feathers, fur and flesh. They also use the subject of the game-stall as an emblem of the fragility of life and the transience of the pleasures of the flesh.

These meanings are also explored in Sam Taylor Wood’s gripping video piece ‘A Little Death’ (2002), and Marc Quinn’s ‘Flesh’ sculptures (2004) both of which play with the traditions of art and continue to exploit the resonance and power of meat as a symbol.