A Modello (1611) for the High-Altar of Antwerp Cathedral

Rubens’s Assumption of the Virgin from about 1613 in the Kunsthistorisches Museum in Vienna was meant to become the High-Altar in the Antwerp Cathedral. The first commission for it dates from about 1610/11. On 24 March 1611, Otto Venius submitted a sketch to the Chapter of the Antwerp Cathedral, representing Our Lord inviting his Bride from Lebanon to her Coronation. Shortly after, on 22 April, Rubens (successfully) submitted two modelli, as a result of the negotiations following the meeting with Otto Venius. Today three ‘surviving’ modelli can be taken into consideration for this commission. 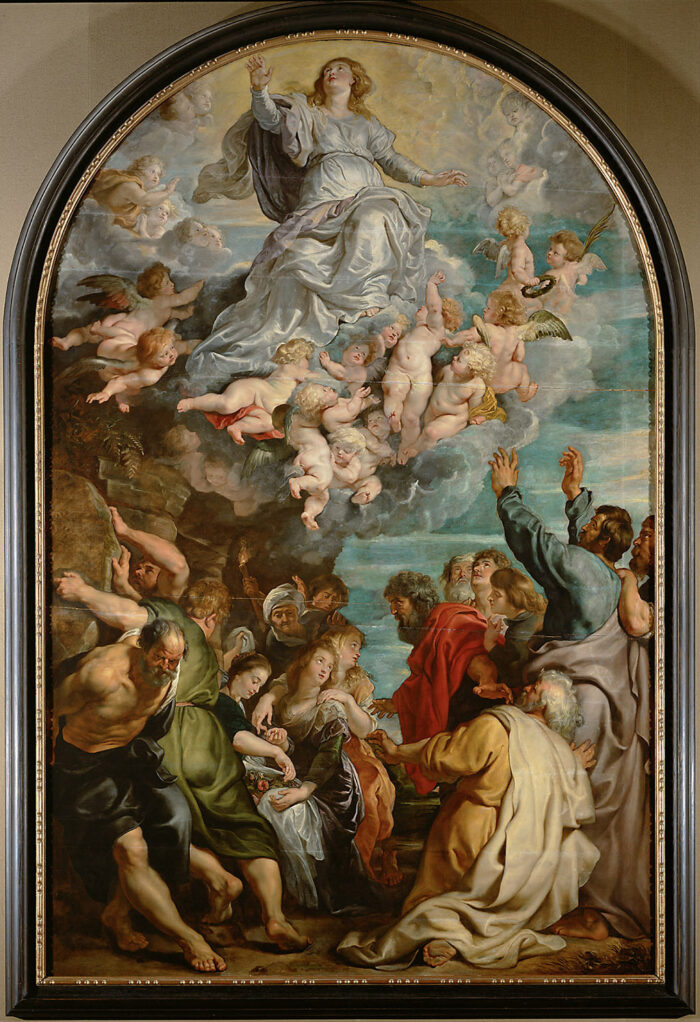 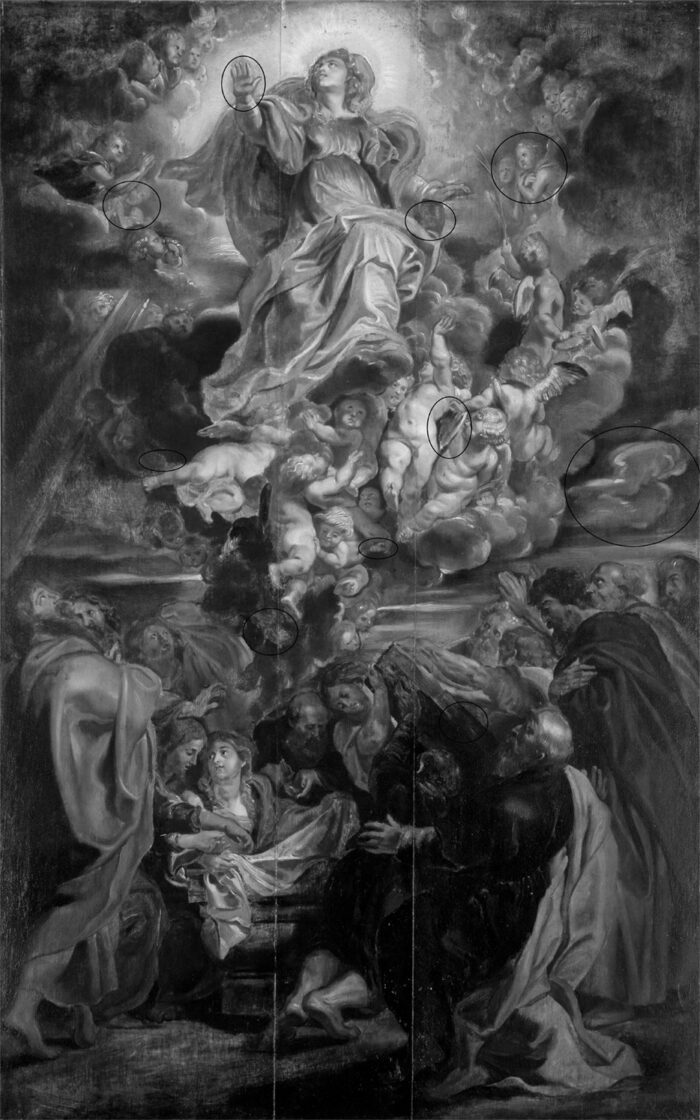 Attributed to Rubens (1577-1640), The Assumption of the Virgin Mary (differences with London-version indicated), ca. 1611 Antwerp

Two of them are well known and e.g. published by David Freedberg. Starting with a painting on panel (transferred to canvas, 106 x 78 cm) by Rubens in the Hermitage Museum in Saint Petersburg showing a combination of the Assumption and Coronation of the Virgin and widely accepted as one of the two modelli submitted to the Canons of Our Ladies Cathedral in Antwerp.  The second modello has not been convincingly identified yet. Much discussed is an Assumption of the Virgin (panel, 102 x 66 cm) by Rubens in the Royal Collection in London which on the other hand seems to be of  later date (about 1613). 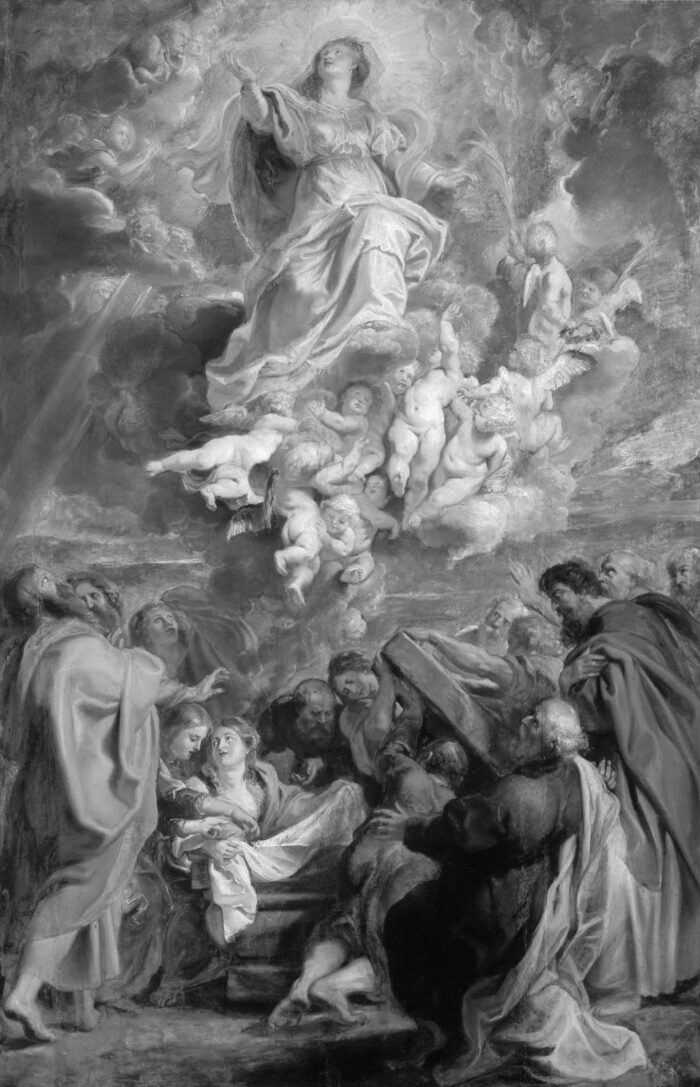 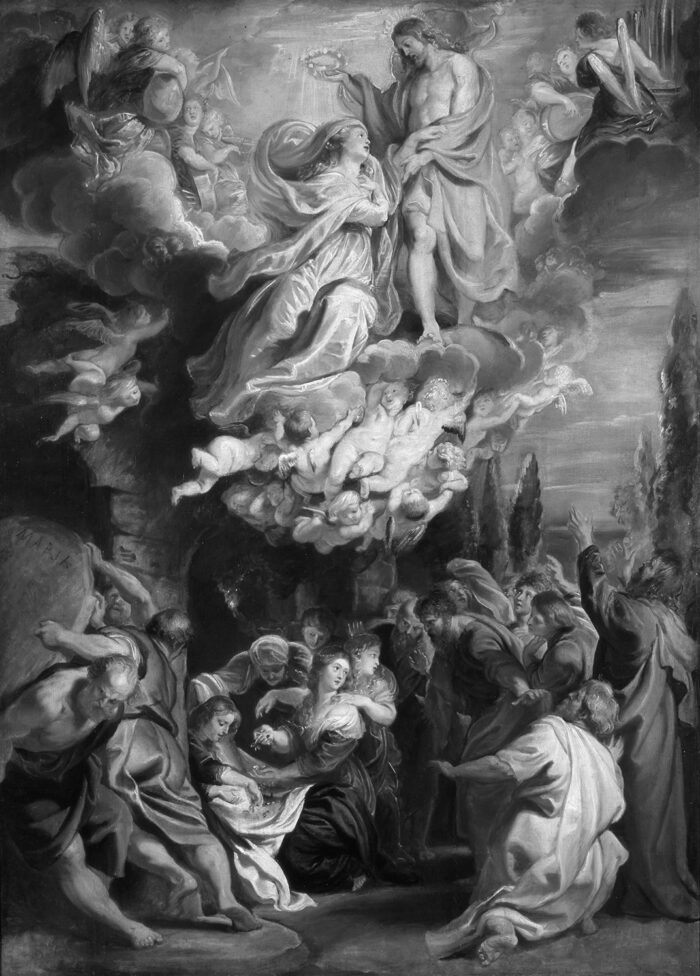 The hereby presented panel (about 1611) also represents the Assumption of the Virgin (panel, 105 x 66 cm) and over-all similarities with the London-panel are obvious. But there are important differences which are interesting in the hereby started discussion and which puts it closer to the final version (Vienna). It especially asked for attention after dendrochronology pointed out that its wooden panel (consisting of three planks in oak-wood) came from a tree cut down in 1590. About 1610 they were in perfect condition to be painted. The Antwerp panel differs from the London-version e.g. in the Virgins right palm (turned upwards) and in two angels holding a wreath of laurels, appearing to the right in a cloud. These angels are absent in the London-panel but reappear in a similar pose in the final version in Vienna. Another angel to the left, at the same level as the Virgin’s floating dress, under the arms of a praying angel, is also missing in the London-version. The hereby studied panel in any case dates from the period in which Rubens presented two modelli to the canons of Antwerp Cathedral (1611). The Virgin, the angels, the women near the tomb, the coats of the apostles, and more, do in no way differ from what one might expect from Rubens. It is certainly not a copy after the Vienna-altarpiece, differs from the version in Buckingham Palace and thus from the existing engraving by Bolswert. It must at this moment be considered the earliest known example of the many known representations of The Assumption of the Virgin attributed to Rubens. It was in the possession of the Sisters of the Augustine Order in Brussels (nowadays Berlaymont-site), probably from the seventeenth century on.