A Virgin and Child with Saint John the Baptist and Angels (oil on copper, 72 x 57 cm) was in the possession of Frau Van Leven, an art dealer in the late 1930’s in Berlin. Gertrude Wilmers (Cornelis Schut (1597-1655), Brepols, 1996, cat. nr. A31) knew about its existence only from a black and white photograph (Rubenianum, Antwerp). The painting was then attributed to Theodore van Thulden and remained on an unknown location since then. It reappeared only recently and is clearly by Schut, very Rubensian and recalls (cf. Wilmers) in particular Rubens’s Holy Family with Saint Francis in the Metropolitan Museum of Art.  A related drawing is in Hamburg (Kunsthalle). Also compare with Schut’s etching with the same subject. 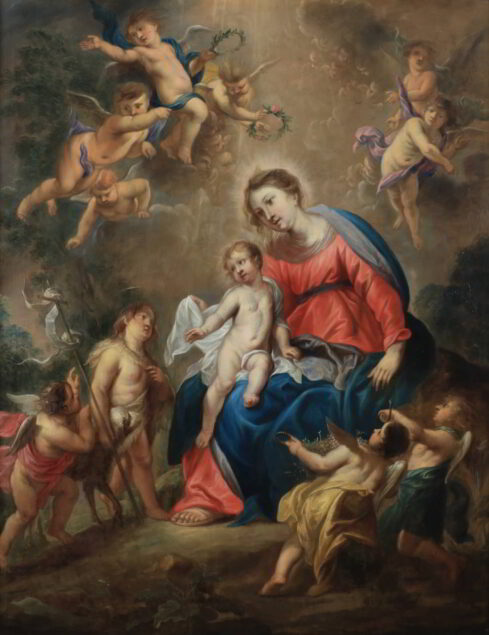 The composition was copied by the German painter Bernhardt Fuckeradt (1601-1662) who spent ca. three years in Rubens’s workshop (1634-1637). Another Cologne painter who was strongly influenced by Schut is Johann Hulsmann (1610-1652); like Johann-Wilhelm Pottgiesser (1637- before 1690) he was probably trained in Antwerp. The influence of Cornelis Schut on Baroque painters in Cologne was certainly important. The Marian cycle by Fuckeradt in the St. Mariae Himmelfahrt in Cologne, consisting of eight paintings (e.g. the copy after the hereby presented composition) reveal clear dependency on  the work of Schut.

Cornelis Schut’s first wife Catharina Geensins (died 1637) and his two children who had died young are buried in Saint-James’s Church in Antwerp. An epitaph monument with Schut’s Pietà is in the south ambulatory on the right of the entrance of the choir.

Information from the curator, 3 March 2022