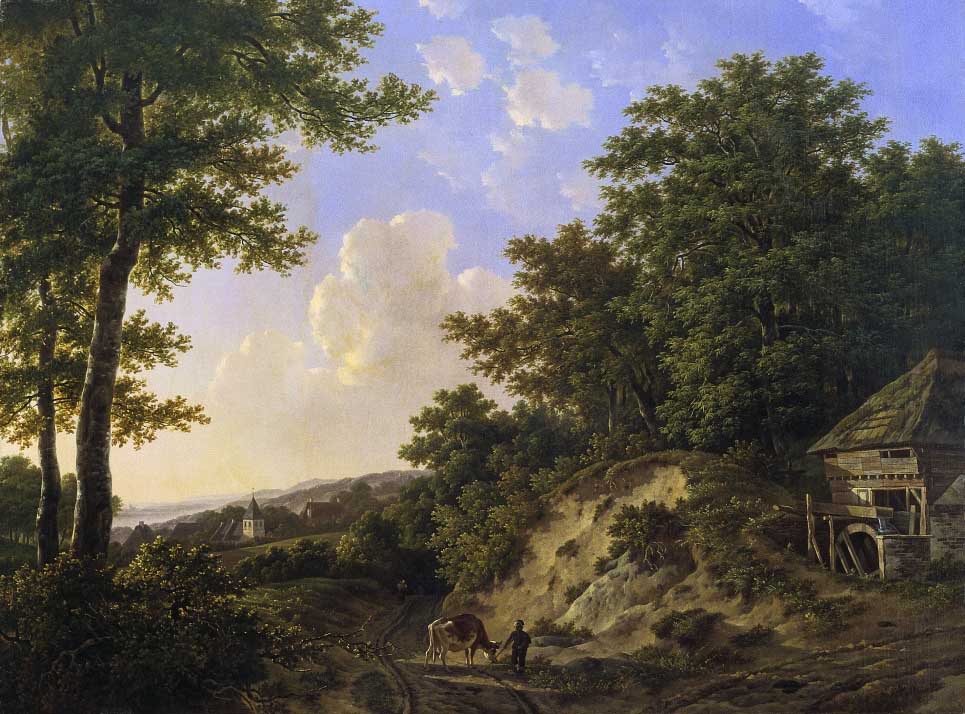 Adrianus van der Koogh, View of Beek from the Ravenberg, 1820

Few people are aware that exhibitions at Museum Het Valkhof have often led to the acquisition of paintings, prints and drawings. Whoever desires to have a peek behind the scenes in the museum can soon have his wish fulfilled. In the Print Cabinet the exposition Old master acquisitions of the printoom will take place from the 25th of September to the 20th of February.

One can see 17th-century paintings acquired from the exhibitions Heerlijke Natuurtoneelen (Lovely nature scenes) and Deftige dames, hoge heren (Distinguished ladies, important gentlemen). But the museum also shows recently acquired portraits (drawings and pastels) from the famous high-society artists Jan Toorop and Antoon van Welie. To the latter artist, who was born in Afferden in 1866, a large exhibition will be devoted in 2006.

Part of the presentation are the 17th-century portraits by famous artists from Nijmegen, such as Nicolaas van Helt Stocade and Rutger van Langeveld (from the exhibition Deftige dames, hoge heren), and some 19th-century views of Beek and Ubbergen by the famed landscapists Adrianus van der Koogh and Isaac van Couwenbergh (from the exhibition Heerlijke Natuurtoneelen). Next to these one may enjoy the 16th-century copperplates of Hieronymus Wierix, and the 18th-century colour-prints of Johannes Teyler, which will form part of future exhibitions.

Naturally the drawings and letters of Jan Toorop (1858-1928) won’t be lacking. They were discovered during the large exhibition on the artist in the fall of 2003 (Jan Toorop – Portrettist). On show is the portrait of Agatha Donkers-De Vries from Nijmegen. She was a collector of Toorop’s work and even had a small museum of her own devoted to the artist in the Evertsenstraat in Nijmegen. The collector’s drawn portrait is on loan from a private collection, as is her correspondence with the artist. In addition to that some portraits of Jesuits will be on show, among which the beautiful pencil portrait of Father Raaijmakers.

Museum Het Valkhof also acquired drawings and pastels by the famous high-society portraitist Antoon van Welie (1866-1956). Van Welie, born and raised in Afferden near Nijmegen, was one of the most important portrait-painters of his time. He worked and lived in England, Belgium, France and Italy. He was in close contact with politicians, artists and writers all over the world and had three popes sit for their likenesses. The portrait of the famous French singer Yvette Guilbert, whom he met in Paris, will be shown in the Print Cabinet. In 2006 Museum Het Valkhof will organise a large exhibition with the works of Antoon van Welie.

Museum Het Valkhof now possesses an impressive collection of Toorop drawings. A permanent loan was recently agreed upon with the Provincie der Jezuïeten and the Archief Kunstdepot (Archive Art depot), which is located in the Berchmanianum cloister in Nijmegen. 15 sheets have been thereby added to the existing collection of Toorop drawings, including portraits of prominent Dutch Jesuits.
With this new acquisition, Museum Het Valkhof possesses one of the largest collections of portrait drawings by Jan Toorop. An absolute highlight is the portrait of the Jesuit Charles Raaijmakers, which was one of the favourites at the Toorop exhibition in Nijmegen in 2003. The portraits can be seen in the Print Cabinet of Museum Het Valkhof until the 20th of February 2005.

With this new acquisition, Museum Het Valkhof possesses one of the largest collections of portrait drawings by Jan Toorop. An absolute highlight is the portrait of the Jesuit Charles Raaijmakers, which was one of the favourites at the Toorop exhibition in Nijmegen in 2003. The portraits can be seen in the Print Cabinet of Museum Het Valkhof until the 20th of February 2005.

Alongside the Toorop drawings, the loan also includes 75 copperplates by the Wierix family of Antwerp, which were rediscovered in the parsonage attic of the Amsterdam church ‘De Krijtberg’. They fit beautifully with Museum Het Valkhof’s graphic collection. The copperplates depict various saints and scenes from the life of Jesus and Mary. The Wierix family worked together with the Jesuits in spreading books and prints, which have served worldwide as a model for paintings, particularly in churches and monasteries. Their copperplates were probably brought to Amsterdam from the Southern Netherlands after the abolition of the Jesuit order in 1773.

The acquisition of a very large painting by Raden Basoeki Abdullah from 1935 is quite unique. It gives a wonderful example of the assimilation of two cultures. An Indonesian Madonna appears above an exotic landscape of rice fields and volcanoes. Abdullah later became one of the greatest Indonesian artists of his time.

The Collection Maris and the Collection Petrus Canisius from the Archief Kunstdepot comprise paintings and devotional items. Art objects from the parsonages of St. Peter Canisius in the Molenstraat and of St. Joseph on the Stijn Buisstraat, and the former Canisius College on the Berg en Dalseweg in Nijmegen also form part of the new acquisition.

The valuable Jesuit collection forms an important addition to the historical-religious collection of Museum Het Valkhof. The Toorop drawings, a number of Wierix copper engravings and the painting by Raden Basoeki Abdullar can be seen up to and including 20 February 2005 in the exposition Acquisitions old art in the Print Cabinet.