The last painting by Vermeer that appeared in auction was A young woman seated at a virginal (oil on canvas, 26,2 x 20 cm), London, Sotheby’s, 7 July 2004, lot 8. It was reproduced on the cover of the catalogue and is now part of the Leiden collection in New York. The description/analyses of this small painting is scientifically beautifully substantiated in the auction-catalogue (pages 24-45) with many illustrations (e.g. X-rays).

Referring to the manner of Johannes Vermeer is a painting dating from the second half of the 17th century that appeared only recently. Although not in too good condition, it is certainly  interesting from the art historical point of view as it does not copy already known compositions by Vermeer and/or his contemporaries. 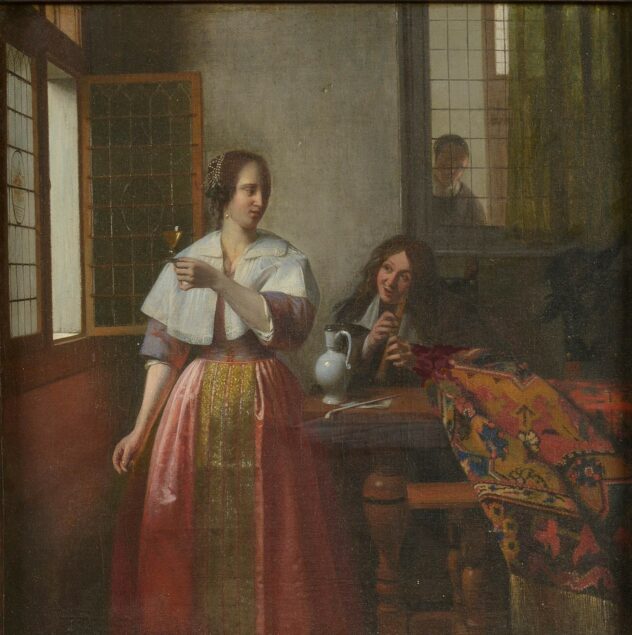 It represents  A young woman with wine glass and musician playing a tenor recorder (oil on canvas, 47 x 47 cm) with all the ingredients of a Vermeer-painting on show. First of all a white faience jug claret with ‘silver’, a type popular in 1625/50; somewhat different from the same type of jug used in Delft at the end of the century. The same jug appears in the Music Lesson in Buckingham Palace (about 1662/64) and in the Lady drinking with a gentleman in Berlin (about 1660/61. The ladies’ dress is almost identical with the one on the Berlin-painting. A similar dress appears e.g. on Frans I van Mieris’ famous  Duet (1658) in Schwerin. Finally it lay before hand to compare the ladies’ right hand (especially the little finger) with the counterpart on the Guitar player in Kenwood (about 1671/72).

The right part of our painting shows a young musician playing a tenor recorder and a woman (a maid?)  behind a window (with transparent green curtain) in an adjacent room. She observes the scene without the young lady and the musician being aware of her presence. 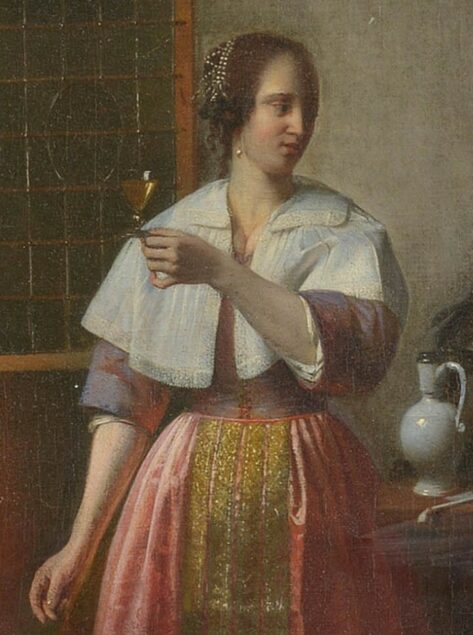 Detail of A young woman with wine glass, 17th century

The musician is playing a so-called tenor recorder that refers to models used in the second half of the 17th century; examples of which are recognizable in paintings by Cornelis Gijsbrechts (dated 1672).  In the first half of the 17th century the recorder was made in one piece. It had the usual number of one thumbhole and six fingerholes. The lowest fingerhole was often made double, so that the player had the choice of playing the lower part with either the right or the left hand. Later in the century the recorder was made in three pieces, the lower two of which had a conical bore (as in our case).

The carpet (that underwent retouching) is a predictable gadget. Although the design is different from any other carpet we know about on paintings by Vermeer, it is somewhat comparable with the versions in Buckingham Palace (see e.g. the fringes) and the Music making company in Boston (about 1665/66).

The chairs in the background with their lion-heads are also very Vermeer-like and so is the typical gray-wall.

Further comparisons can be made with works by Pieter de Hooch, Gabriel Metsu, …. but it seems justifiable that our painting refers to an unknown composition by Johannes Vermeer, dating from the beginning of the 1660’s.