This year, the annual Amsterdam Center Lecture doubles as a keynote lecture of the Triennial Conference of the Historians of Netherlandish Art. In his lecture ‘The Image of the Refugee’, Geert Janssen asks what a set of lavishly decorated golden cups from Wesel can tell us about the iconography of refugees and the emergence of humanitarian cultures in early modern Europe. 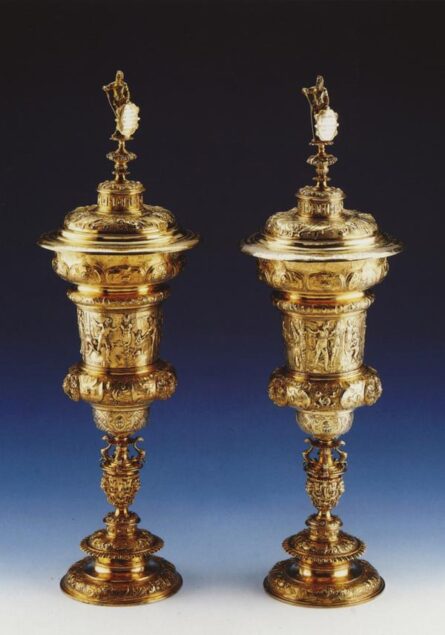 The Image of the Refugee Images of refugees have become disturbingly familiar in the 21st century. For all their immediacy and topicality, representations of flight and displacement have a history too, which both clarifies and complicates common perceptions of refugees today. This lecture examines when, why, and how images of refugees first emerged in visual media (e.g. drawing, painting, print) and what their shifting iconography can tell us about their creators, audiences and stake holders. The early modern Low Countries provide some promising starting points in this regard. Revisiting golden age Antwerp and Amsterdam also reveals how the emergence of refugee imagery was linked to global expansion schemes and the rise of humanitarian cultures in Europe.

Due to the expected number of attendees, there will be no opportunity for a public discussion afterwards.

The Annual Lecture coincides with the opening of the HNA Conference 2022.

ACSEM is formerly known as Amsterdam Center for the Study of the Golden Age. The new name comes with a new annual program – the Object Quolloquia Series. The series has the overarching theme: Exploring the World through the Material Turn. All speakers have taken up the challenge of creating a coherent, interdisciplinary program. Thanks to them, it promises to be a year of in-depth discussion and new acquaintances. The full annual program can be found below.

The Object Colloquia Series explores the world through the material turn. Each interdisciplinary duo of speakers takes one object or product as a point of departure to study and discuss various aspects of Early Modern art, culture, and history. These series are organized by the Amsterdam Center for Studies in Early Modernity (ACSEM).