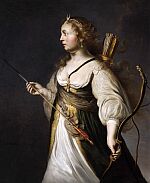 From 12 November 2004 to 10 April 2005 the Groninger Museum will present the exhibition Adam Camerarius, a Groningen Painter from the Golden Age. This is the first occasion that an overview of the work of the unknown but surprisingly good 17th-century Groningen painter Adam Camerarius has been on display.

In 2004, the Groninger Museum acquired the painting Portrait of a Woman as Diana by the 17th-century Groningen painter Adam Camerarius. It is a forceful portrait of a robust woman in fancy clothes with a bow in her hand and a crescent moon on her head, the attributes of the goddess Diana. This acquisition is exceptional, simply because not many Camerarius paintings are known. For the Museum, it is the third Camerarius acquisition in a hundred years: works by this master were also acquired in 1901 and 1955. In 1901, a mantel painting showing the four children of Mayor Tjaerd Gerlacius was donated to the Museum. 1955 witnessed the purchase of a portrait of J. Reiniers, consul in Cadiz. The portrait of Diana, which is a long-term loan from the J.B. Scholten Fund, was the direct impulse for this exhibition. The counterpart of this painting, displaying the god Apollo, has been borrowed from Reims especially for this occasion.

Camerarius was born in Groningen and followed his education in Amsterdam. Camerarius was primarily a portrait painter. He was conspicuous for his unusual colour combinations that have a surprisingly modern appearance. In 1659, he returned to Groningen, his birthplace, and his family’s network of connections ensured he had enough commissions. He was an excellent painter but his work remained unnoticed among the great masters of the Golden Age. Unfortunately, his dates of birth and death are unknown.

Other Camerarius paintings on show in the exhibition include an early work on a large scale: Christ and the Centurion from the Rijks Museum in Amsterdam, and the Regents of the Orphanage in Naarden, borrowed from the Municipality of Naarden. A portrait of Mary Magdalene is on loan from the Rubenshuis in Antwerp. It has been quite some time since the Groninger Museum was able to display 17th-century masterpieces of this quality.

Museumeiland 1
NL- 9711 ME Groningen
The Netherlands