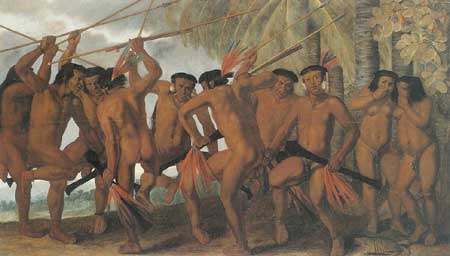 The year 2004 will mark the 400th anniversary of the birth of Count Johan Maurits van Nassau-Siegen. Together with his good friend Constantijn Huygens, Johan Maurits was one of the most remarkable figures of the Golden Age. His influence was inestimable both as the commissioner of the Mauritshuis, and as a patron and maecenas of the arts and sciences. As governor-general (1637-1644) of the Dutch colony of Brazil, he included several artists in his retinue to record the country and the local population. For example, he commissioned Albert Eckhout to produce life-sized studies of the members of the various indigenous peoples. In addition, Eckhout made still lifes of Brazilian plants, flowers and fruit. This unique series of 25 paintings hung in the Mauritshuis from 1644 to 1654. For the first time since then, the complete – recently restored – set will return to the Mauritshuis.

From a museum press release

From 27 March through 27 June 2004, the Mauritshuis will be presenting an exhibition of work by Albert Eckhout (c. 1610-1666). His original outlook and unconventional approach ensured him a special place in 17th-century art. Eckhout’s life-size paintings of the inhabitants of Brazil and depictions of exotic fruits and plants are the oldest preserved images of the Brazilian population and nature. They were made for Johan Maurits, count of Nassau-Siegen, the commissioner of the Mauritshuis. He resided in Brazil from 1636 to 1644 as governor-general in the service of the Dutch West India Company.

The exhibition is made possible by the main sponsor NIB Capital, by the Friends of the Mauritshuis Foundation, and by the Hague 2004 Foundation.

Johan Maurits put an end to the Portuguese incursions in the Dutch colony in north-eastern Brazil, thereby ensuring peace and stability in the region. Trade flourished under his regime and he ruled the country as an enlightened prince. The count was genuinely interested in Brazilian culture and captivated by its inhabitants. Upon taking up his office he secured the services of several Dutch scientists. He also brought along Eckhout and the Haarlem landscape painter Frans Post, whom he commissioned to record the various Brazilian population groups, the rich flora and fauna and the landscape. Eckhout produced a set of twelve still lifes, eight life-size figure pieces and a large painting with dancing Tapuya Indians. These paintings by Eckhout and the landscapes by Post were among the Europeans’ first, surprising and sometimes disconcerting introductions to South America. To this day, these canvases continue to make an overwhelming impression.

In the painting with the dancing Tapuya Indians, Eckhout portrayed their unusual – that is in the eyes of Europeans – manner of dancing (fig. 16). These dances were performed in the nude and thus were a great source of amusement to the prudish westerners. While Johan Maurits was living in Recife, his residence in The Hague was being built by Jacob van Campen, the so-called ‘Mauritshuis’. Johan Maurits was so fascinated by Brazil that he had Brazilian decorations incorporated in his new house. Moreover, in 1644 he brought back several Indians from Brazil to The Hague, who danced at the festive opening of the Mauritshuis. His fondness for this South-American country soon earned him the nickname ‘Maurits the Brazilian’.

Eckhout painted life-size images of individuals of the various population groups: the Tupi Indians, the Tapuya Indians, the mulattos and mestizos as well as the Afro-Americans, who were brought to Brazil as slaves. He portrayed a woman and a man from each group. Eckhout’s depictions of objects and scenes in the background provided information about the various cultures and customs of the figures concerned.

For example, in the background of the painting with the Tupi Indian several people wash their clothes and themselves at the same time (fig. 10). This refers to their custom of washing themselves daily. The Tupi woman stands before a landscape with fields of citrus and palm trees and in the distance is a colonial house (fig. 11). In the 17th century many Tupis worked on European plantations and converted to Christianity.

The Dutch perceived this group as the true Brazilians because, according to European standards, they were the most civilised. This is in contrast to, for example, the Tapuya Indians who in the eyes of westerners observed reprehensible practices, such as eating their dead because they did not entrust mortal remains to the earth. Eckhout conveyed this cannibalism by depicting a female figure holding a severed forearm and carrying a basket on her back from which a leg protrudes (fig. 9). In the background are Indians with spears, a reference to this tribe’s belligerence.

The paintings are generally assumed to have been made as wall decorations for a monumental room or hall. Presumably they were painted for Vrijburg, the palace outside of Recife, where Johan Maurits lived in Brazil. It is virtually certain that upon the count’s return, the works were not hung as an ensemble in the Mauritshuis in The Hague, simply because there was no space for them there. Nevertheless, Eckhout may have been involved in the decoration of this residence. For instance, a drawing is known of a wall painting with Brazilian motifs on one of the walls of the upper floor. This drawing is also presented in the exhibition.

Johan Maurits presented the set of 21 paintings that Eckhout produced on commission to his cousin Frederik III, king of Denmark, in 1654, and it is now in the Nationalmuseet in Copenhagen These works will be travelling to The Hague for the duration of the exhibition, which is being held on the occasion of Johan Maurits’ 400th birthday.

Starting mid-February 2004, there will be a special Eckhout theme page on the internet. An informative sheet on all of the paintings will also be available to visitors free of charge. And, by means of a travelogue families can join Eckhout on a voyage of discovery. 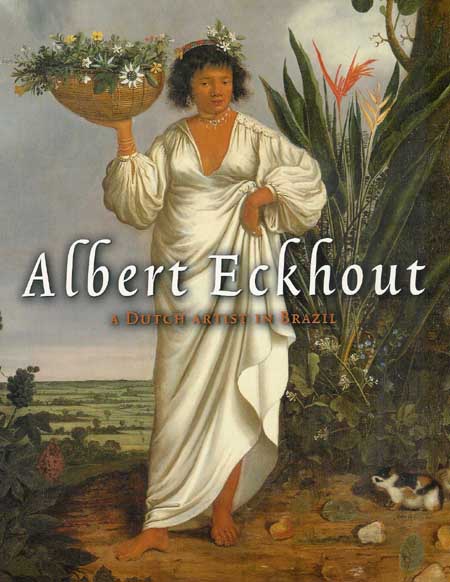