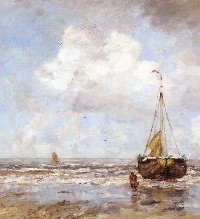 This summer the Centraal museum is presenting the exhibition Everything changed. From 24 July until 28 August the museum’s former stables are dominated by 19th century painting and sculpture. The subjects that engaged Dutch painters in the 19th century seem surprisingly relevant to our times. What does it mean to be ‘Dutch’? How can citizens influence politics and how does one react to busy urban life?

Passion for seeing: Breitner, Jongkind, Maris and others

Work can be seen by Dutch artists who, each in their own way, were reacting to the enormous revolution in life in the 19th century. It was a century of great scientific discoveries, which often came about through the precise observation of nature. In the mid-century, photography enabled everyone to record their own reality. The passion for looking left no one unmoved. In the visual arts this can be seen in the manner of painting, with movement and experience becoming important elements. The Centraal Museum is showing masterpieces from its own collection, including works by Breitner, Van Gogh, Israëls, Jongkind, Kruseman, Maris and Weissenbruch, which focus on this experience. In addition the museum is showing highlights from its collection of 19th century furniture.