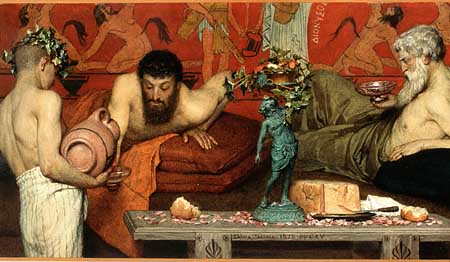 The Museo Archeologico Nazionale, Naples, provides the setting for the show Alma Tadema e la nostalgia dell’antico (Alma Tadema and nostalgia for the ancient world), running from October 18, 2007 to March 31, 2008, dedicated to Lawrence Alma-Tadema (1836-1912), an artist of Dutch birth, but whose adopted country was England.

The fourteen “museum-pictures” by the artist present an extraordinary re-enactment of the Ancient Roman (and, to a lesser degree, the Ancient Greek) world, with all its ancient furnishings, refined garments, and interiors decorated with fine marble and dazzling flowers. With a sophisticated technique and meticulous draughtsmanship, he evokes the dream of a world populated by women of introspective beauty, in which the physical reality of the depictions forms a contrast with Neoclassical idealistic detachment, and renders the nostalgia for the ancient world poignant and entirely believable.

The artist, with his detailed architectural and literary knowledge of the classical ancient world, succeeds in bringing to life a world forever lost, in a style hallmarked by aesthetic grace, in which everyday scenes take on the character of mythology.

The monumental remains of Rome, and to an even greater extent the ruins and relics from Pompeii, Herculaneaum and the entire Vesuvius area, provided inspiration not only for Alma-Tadema, but also for the large number of Italian and foreign artists (the exhibition comprises sixty-one works) who worked in the Neo-Pompeian style. Their art became a celebration of national sentiment, and to an even greater degree of an antique exoticism, typical of upper-class patrons who enjoyed seeing their own reflections in these works, giving nobility to their own vices and virtues by means of the rituals and customs of a society that, though very distant in time, lived on in the present by means of the archaeological findings whose discoveries were widely reported.

The Museo Archeologico Nazionale in Naples possesses one of the most prestigious archaeological collections in the world, and it conserves many of the valuable remains that Alma-Tadema and the Italian artists cited, reconstructed and redeveloped in their paintings. A selection of these pieces (about fifty archaeological specimens) from excavations in the Vesuvius area (statues, tripods, candelabras, frescoes) are included in the show, often in relation to the paintings that they helped inspire.

The sequence of paintings in the show, including many works by the Italian school (Gigante, Palizzi, Muzzioli, Maccari, Miola, Morelli, D’Orsi, Netti, Bargellini), begins with compositions depicting archaeological landscapes (excavations at Pompeii, interiors of homes, the female diggers, tourists visiting the scene), depicted in a realistic or more subtly evocative style. It moves on, with a leap in time and a different concept, to the material re-evocation of those ancient locations and settings, reconstructed and once again populated by their inhabitants.

The extensive section dedicated to everyday life in the ancient world offers visitors a glimpse of shops filling with customers, patrons and clients, scenes of female toilet, religious rituals, gladiatorial entertainment, life at the baths: themes interpreted by the various artists according to their own unique viewpoint.
Then there are the scenes linked to the lives of historical figures and significant events, before reaching the core of the show: a selection of works by Alma-Tadema, from important international collections, both public and private, shown in relation to Vesuvian archaeological remains that had the greatest impression on the artist’s imagination.

The exhibition itinerary is completed by a number of documents and examples of 19th century decorative arts (tables, ceramics), likewise inspired by archaeological discoveries and the recreation of the ancient world.