Arnt the Sculptor of Images – Master of animated Sculptures

The exhibition has been rescheduled due to the Covid-19 pandemic and will now run from 25 June to 20 September 2020.

The first exhibition dedicated to the founder of a rich school of sculpture on the Lower Rhine takes visitors into the era of the late Middle Ages. Some 60 works by the artist, who worked between about 1460 and 1492, will be shown. The late Gothic oeuvre of Master Arnt captivates with extraordinary liveliness, a wide range of subjects and narrative detail.

In early 2019, the Museum Schnütgen succeeded in acquiring three previously lost fragments, with which a masterpiece by Master Arnt, a panel from an altarpiece with the Adoration of the Magi, can be completed and as such be shown for the first time. 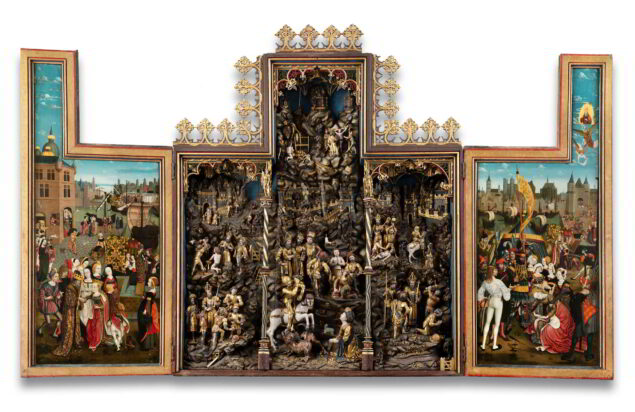 Another important work of the carver comes from the Nicolaikirche in Kalkar. The St. George altarpiece with a width of five meters (when opened) will be presented outside of the church for the first time in this exhibition.

Other high-profile loans – to name only a few international lenders – will come from the Rijksmuseum in Amsterdam, the Musée de Cluny in Paris and the Musée Royaux d’Art et d’Histoire in Brussels, as well as numerous churches on the Lower Rhine.

Lower Rhine and the Netherlands

Master Arnt stands for the interconnection of artistic impulses from the Lower Rhine with those of the adjoining Netherlands: From about 1460–1484 he worked along the Lower Rhine in Kalkar, and from about 1484–1492 in Zwolle, the present capital of the Dutch province of Overijssel. His workshop provided sculptures for numerous places around the IJsselmeer and the region around Kleve.
In addition to altarpieces with figural narrative reliefs and statues of saints, striking individual figures of Christ, angels, and the Virgin and Child are part of Master Arnt‘s surviving work. Despite the productivity of his workshop, Master Arnt still remains largely unknown to a broader public – the Museum Schnütgen will assemble a considerable part of his oeuvre especially for this exhibition and offers the opportunity to (re-) discover the sculptor.