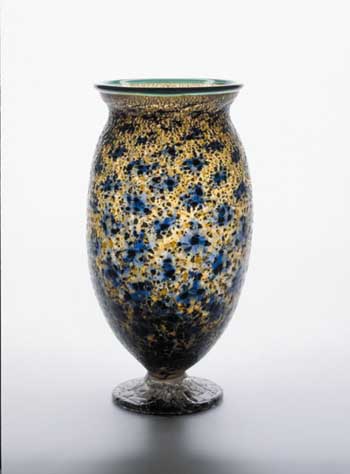 From the website of the Latvian Museum of Foreign Art, Riga

Around 1870, as the economy started to bloom again in The Netherland after a period of stagnation, there arose the wish for a new style that was less dependent on models from the past. It was felt that this called for new types of art education, which in turn led to the foundation of several new Arts and Crafts Schools around 1880. In the course of the nineties a real ‘Applied Arts-movement’ came into being in the Netherlands, strongly influenced by the Arts and Crafts Movement in Great Britain. Within this movement soon a division arose between on the one hand designers who were strongly ïnfluenced by the international (especially French and Belgian) Art Nouveau, and on the other hand designers who were in favour of a much more sober and severe design.

The first group had its base mainly in Delft and The Hague, in which last city in 1883 the ceramics-factory ‘Rozenburg’ was founded. For this factory Th.A.C. Colenbrander designed the first Dutch ceramics with truly modern decorations, that did not refer anymore to styles from the past. Soon he was followed by Adolf le Comte with his designs for the Delft ceramic factory ‘The Porceleyne Fles’. Other, younger designers from this group, i.a. Johan Thorn Prikker, were connected to the ‘Arts and Crafts’ firm in The Hague, for which also the Belgian Henry van de Velde designed furniture.

The second group had its base mainly in and around Amsterdam, with artists such as H.P. Berlage (architect of the Amsterdam Stock Exchange (1898–1903), the first important modern building in the Netherlands, Jac. van den Bosch, Jan Eisenloeffel, Chris van der Hoef, Chris Lebeau and Willem Penaat. These artists, most of whom were linked with the Amsterdam firms ‘Amstelhoek’ and/or ’t Binnenhuis’, felt that decorations should be used sparingly and only as a means of accentuating the construction of the object. The work of these artists and those of like mind was termed ‘the constructive movement’; it generated a lot of interest abroad, especially in Germany. Some of this group even took positions as teachers in this country, as in in the artists-colony founded by K.E. Osthaus in Hagen.

Some designers however took an intermediate position and combined rather severe overall forms with more luxurious decorations and materials. The best known of these are the three friends who in 1898 became the chief-designers for the Amsterdam firm E.J. van Wisselingh & Co.: G.W. Dijsselhof, Theo Nieuwenhuis and C.A. Lion Cachet. The latter soon became the most prominent interior decorator of Dutch ocean-liners.

For many artists the start of World War I was a cause for reflection on the unthinking manner by which renewal had been pursued up to 1914. Many artists reorientated themselves to tradition and only a small number, among them those connected with the journal De Stijl, of which Piet Mondriaan, Theo van Doesburg and Gerrit Rietveld are the best known, continued to experiment with modernism. In applied arts the austerity and severity of the constructivist movement was relinquished in favour of a more expressive and more richly decorated style of design (and of architecture), which was given the name ‘Amsterdam School’. Well known exponents of this school, of which the Scheepvaarthuis (1913-17) and Tuschinski-theatre (1920-21, both in Amsterdam) were calling cards, were architects and furniture designers Piet Kramer and H.Th. Wijdeveld, sculptor H.A. van den Eijnde, textile designer Jaap Gidding and ceramic designer H.A. Breetveld. Wijdeveld was also editor-in-chief of the magazine Wendingen, the mouthpiece for this movement, and responsible for the remarkable typography of this magazine, which exerted great influence on many graphic designers. The Amsterdam School did not, however, break radically with art before 1914 and for many older designers such as Van den Bosch, Eisenloeffel, Lebeau, Lion Cachet and Nieuwenhuis it was relatively easy to affiliate themselves with the movement.

The dominance of the Amsterdam School held functionalism somewhat back till the end of the twenties. Well known examples of this last movement are domestic ornaments and utensils from the Gero factory (for which Van der Hoef worked) and lamps and furniture by Willem Gispen. Only the Leerdam glass factory started to produce vases and tableware in a more functionalist style as early as 1915, designed by K.P.C. de Bazel, Cornelis de Lorm, Andries Copier and others. The economic crisis after the stock exchange crash of 1929 ended an excessive use of decoration and luxury materials, and than a new era in Dutch applied art arose.