Richard Verdi, director of the Barber Institute of Fine Arts 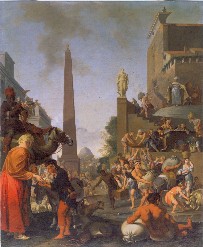 What prompted a 17th-century Dutch painter to abandon a lucrative career painting landscapes in favour of attempting the highest genre of art, history painting? And why did Bartholomeus Breenbergh paint not one, but three canvases of the same subject, Joseph distributing corn in Egypt – two of which are almost identical?

A contemporary of Rembrandt’s teacher, Pieter Lastman, Breenbergh is a virtuoso painter of landscapes, portraits and history subjects, and broke all the rules of Dutch painting of the period by straddling and mixing all these genres. So why is he virtually unknown among art lovers and under-appreciated by art historians?

Breenbergh’s enigmatic masterpiece Joseph distributing corn in Egypt is the centrepiece of the latest in a series of Picture-in-Focus exhibitions at the Barber Institute of Fine Arts at the University of Birmingham, starting on October 29. The exhibition is curated by Barber Director Richard Verdi, curator of the blockbuster October 2003 show Saved!: 100 Years of the National Art Collections Fund.

With loans from public and private collections in Britain and abroad, including the Bowes Museum, the British Museum, the National Gallery, the Städelsches Kunstinstitut, Frankfurt, and the Nieuwe Kerk in Amsterdam, the exhibition will probe the many mysteries of this versatile and mesmerising painter.

The exhibition will, for the first time, also unite the Barber Institute’s version of Joseph distributing corn in Egypt [1655] with the almost identical version painted a year earlier, now in a private collection. It will feature stunning landscape and history paintings from throughout Breenbergh’s career alongside works by related masters.

Richard Verdi chose the Breenbergh picture as the focus of this year’s major loan exhibition having become fascinated by its complexity and virtuosity while researching the picture for a comprehensive catalogue (yet to be published) of the Barber Institute’s paintings.

“Researching Breenbergh was an adventure in the dark, an exhibition waiting to happen,” said Professor Verdi. “He is so unusual – from being a prolific painter of commercial Italianate landscapes from the 1620s to the early 1640s, his output drops and he suddenly re-invents himself as a monumental history painter – why? Breenbergh is a consummate storyteller, and something of a chameleon. He’s all kinds of painter at once, and a very great artist that no-one knows.”

Wednesdays at 1.10pm in the Lecture Theatre, Barber Institute of Fine Arts, at the University of Birmingham. Free. Lectures last approximately 50 minutes.

History painting was the Cinderella subject among Dutch artists of the 17th century. With Calvinism officially banning religious art, most painters gravitated towards more marketable themes such as genre painting, landscape and still life. Yet a handful of Dutch artists, including the greatest of them all ­ Rembrandt ­ cultivated history paintings, often cloaking them in other guises. Among them was the subject of this winter¹s principal exhibition ­ the landscapist who re-invented himself as a history painter, Bartholomeus Breenbergh.