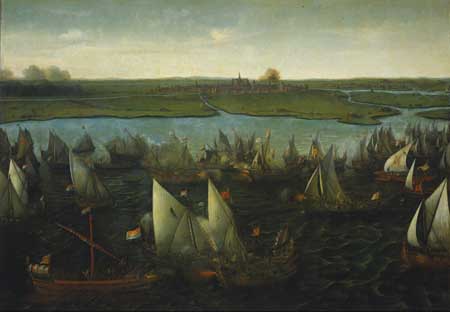 In 1573, a battle was fought for control of the city of Haarlem. The following two years marked a turning point in the struggle against Spanish oppression. On 8 October 1573, the Spanish siege of Alkmaar failed and, on 3 October 1574, Leiden was liberated from the Spanish besiegers. These historical events are widely commemorated and celebrated to this day.

In cities such as Haarlem, Alkmaar and Leiden, it wasn’t long before people began looking back with great pride on their part in the struggle and the sacrifices made. Artists were commissioned to produce important commemorative pieces. The centrepiece of the exhibition is the painting Battle of Haarlemmermeer, which the burgomasters of Haarlem commissioned Hendrick Vroom to make 50 years after the event. This imposing canvas has been completely restored, specially for the exhibition, thanks to a generous contribution from Amsterdam Airport Schiphol. Now that the details have been revealed once more, the painting clearly depicts how a Haarlem city gate was blown up, sending the Spanish aggressors flying into the air like little pale creatures from a nightmare, and how the Haarlemmerhout forest, where a Spanish army camp was based, was obliterated.

Together with other items, including a canon used in the battle that was discovered when the Haarlemmermeer lake was drained in the 19th century, the painting tells the story of the war in the area around Haarlem. In addition to the painting by Vroom, there are two other items of major importance on show which hark back to the Eighty Years’ War: a painting of the battle of the Zuiderzee (from 1573) and a tapestry telling the story of the relief of Leiden (from 1574).