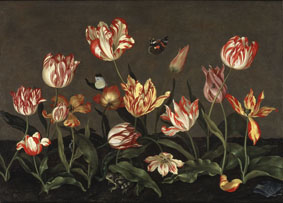 This spring the Nationalmuseum in Stockholm opens its doors on a resplendent exhibition entitled The Language of Flowers. The exhibition presents floral motifs in European art from the Renaissance up to the present day, primarily from an artistic point of view but also considering their botanical and symbolic aspects. The exhibition – comprising some 200 books, oil paintings, watercolours, photographs, ceramics and glass – is a contribution to the 300th anniversary celebrations of the birth of the great Swedish botanist Linnæus (Carl von Linné).

The Language of Flowers does not claim to give an exhaustive picture of its subject but offers historical glimpses beginning with botanical illustrations of the Renaissance and 17th century symbolic still-lifes with Van Dyck and Arcimboldo among the authors. Today we have lost the knowledge of how to interpret works of art by means of the symbols they include. The Language of Flowers helps us to rediscover the hidden meaning of plants and flowers. In the 18th century artists worked with more decorative floral paintings and this led on to an excess of paintings of flowers in the romantic era. During the 19th century floral painting became very much the province of women while during the 20th century the floral still-life developed almost into an abstract genre of painting. This development can be seen, for example, in photographs by Robert Mapplethorpe and Hans Hammarskiöld and paintings by Vincent van Gogh, Georgia O’Keeffe, Manet, Monet and Andy Warhol.

The core of The Language of Flowers is drawn from the Nationalmuseum’s own collections but we have also been able to make major loans from foreign museums and collections, principally in Europe. In the exhibition we encounter such issues as aesthetics in art, pleasure and beauty, life and death and we increase our knowledge of such matters as medicinal plants and the speculation in tulip bulbs in the Netherlands during the 17th century. A further item is Line Bergseth’s installation using fresh flowers which will be continually replaced throughout the exhibition period. The status of Linnæus as a scientist and botanist is the hub of the exhibition. Disciples of Linnæus travelled the world exploring and documenting the world of plants. Linnæus’s book, Systema Naturæ, spread around the world and besides illustrations of flowers and other plants we also meet him eye to eye in Alexander Roslin’s faithful portrait from 1775.

Floral motifs have always been popular with porcelain manufacturers and glass designers. This can be seen in the exclusive Meissen china, in a lavishly decorated bidet from 1765, in magnificent art-nouveau vases by Gallé, and in tableware from Rörstrand.

A brief but richly illustrated catalogue guides visitors through the exhibition and also contains background essays and a useful dictionary of symbols.