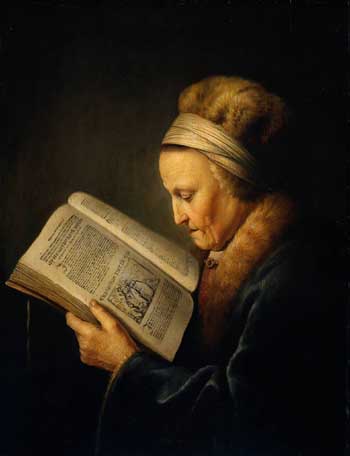 To mark the nomination of Amsterdam as World Book Capital City, the Rijksmuseum presents Books in the Age of Rembrandt at his branch at Amsterdam Airport Schiphol. The exhibition, running from 9 July to 13 October 2008, features books in paintings of the Dutch Golden Age. Ten pictures by various 17th-century masters reveal some of the functions and significance attached to books in the Age of Rembrandt. Uniquely, all the books portrayed in these pictures are also displayed in the exhibition. One of the highlights of the show is the portrait of Rembrandt’s Mother, entitled ‘Old Woman Reading’ (1640) by the Dutch painter Gerard Dou.

The paintings presented in Books in the Age of Rembrandt highlight ten different aspects of the genre. Together they provide an overview of the kinds of books that were available in the Low Countries in the 17th century. The variation in the significance and function of these books symbolises the relevance of the book in the Netherlands in the Golden Age, and so of Amsterdam as World Book Capital City.

Books play a crucial role in Amsterdam’s history. Books, the first mass media, made Bibles and prayerbooks accessible to the population at large long before the Golden Age. With the invention of printing in Europe in the mid-15th century and the establishment of the first press in Amsterdam in 1506 the spread of secular literature grew. The steady rise in demand for printed matter relating to various areas, such as science, politics, theory and study was matched by an increasing supply. Indeed, the book as object also became a valued and sometimes elaborately decorated item. In the Golden Age it became something of a status symbol.