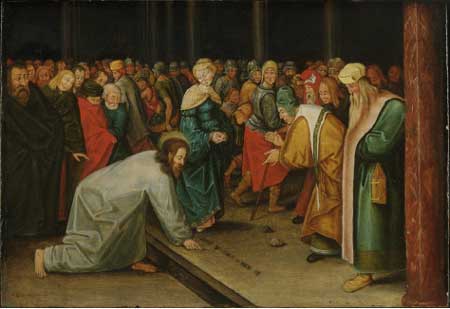 This exhibition features a selection of works from the John G. Johnson Collection by Hieronymus Bosch (c. 1450–1516) and his followers, as well as the family and followers of Antwerp printmaker and painter Pieter Bruegel the Elder (c. 1525/30–1569).

Born into a family of artists in the Dutch city of ‘s Hertogenbosch, Hieronymus Bosch began working around 1474. Most famous for his Garden of Earthly Delights (1515), Bosch counted both the church and private collectors among his patrons. Viewers were captivated by his sophisticated compositions, particularly his depictions of bizarre creatures suffering deformities that were thought to forebode evil.

His fantastic imagery, and especially his realism, proved immensely popular in the sixteenth century—also inspiring Pieter Breugel the Elder, his sons, and their followers. Breugel’s oldest son Pieter the Younger (1564–1637/38) became “adroit at copying and imitating his father’s works” according to the biographer Carl van Mander, but in a clear and vibrant style all his own. Their work gave rise to genre painting, which includes everyday scenes of village life, fairs, and peasant weddings, along with other non-religious subjects. Genre scenes became popular in the wake of the 1566 Iconoclasm (a movement in which Calvinists destroyed images of Catholic saints throughout the Netherlands) and the rise of Protestantism in the Low Countries.