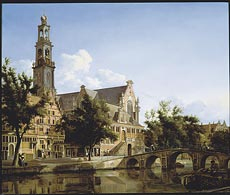 In 2007 the Rijksmuseum presents the first monographic exhibition on Jan van der Heyden in the Netherlands since 1937. Van der Heyden was one of the leading 17th-century painters of Dutch cityscapes. He was also fascinated by firefighting and is still remembered to this day by many as the inventor of the fire hose. The Rijksmuseum exhibition focuses on the diversity of Van der Heyden, who became known as the Dutch Leonardo da Vinci. The first part features a selection of sixteen of his finest paintings, on loan from various museums and private collections in Europe and the United States. The second part concentrates on his dramatic sketches and prints of fires in the city. In addition, his famous book on firefighting, published in 1690, is displayed, alongside an early example of his fire hose.

Jan van der Heyden (Gorinchem 1637-1712 Amsterdam) was one of the leading pioneers of Dutch cityscape painting in the 17th century. His depictions of canals, churches, public squares, castles and courtyards reveal a remarkable eye for detail. He used sharp colours, with subtle nuances of tone and atmosphere to portray these scenes, often creating striking perspective constructions.

Van der Heyden’s paintings were already famous in his own day for their wealth of detail. Despite the apparent natural effect of the depiction, for which he developed innovative techniques, topographical accuracy was not Van der Heyden’s primary concern. He often took buildings out of their original setting and placed them in an entirely new context. A composition had above all to convey the atmosphere of the location. As the inventor of the architectural capriccio, a depiction of a fictional location, Van der Heyden was a major precursor of 18th-century Italian vedute artists such as the Venetian Canaletto and Bernardo Bellotto.