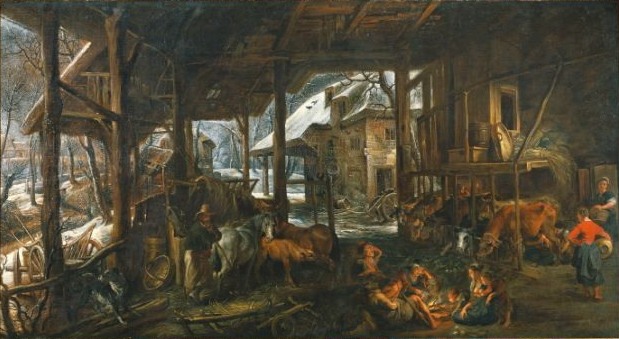 The exhibition Bruegel to Rubens: masters of Flemish painting brings together 51 masterpieces of Flemish art, including works by Quinten Massys, Jan Gossaert, Pieter Bruegel the Elder, Jan Brueghel the Elder, Anthony Van Dyck, Peter Paul Rubens and David Teniers the Younger. Created in the Southern Netherlands during a turbulent period in European history (1500-1665) the portraits, religious paintings, still-lifes, genre scenes and landscapes on display define the Flemish tradition in art. All the paintings in the exhibition come from the Royal Collection, demonstrating British appreciation of the exquisite craftsmanship of Flemish sixteenth and seventeenth-century painting.

There are fine examples of portrait painting of the sixteenth century, which show meticulous technique and extraordinary realism. In Hans Memling’s Portrait of a man, the subject appears to project into our space, while Jan Gossaert’s The three children of Christian II of Denmark blurs the boundaries of the real and painted world by the use of a fictive inner frame. The boy at a window, by an unidentified artist, is the most striking example of such illusionistic tricks. He rests his left hand on the window ledge directly below the catch, while with his right hand he taps the glass.

Also represented is the recurring theme in Flemish art of an ancient story recast in a modern guise or set in contemporary surroundings. Hans Vredeman de Vries places the biblical story of Christ in the house of Mary and Martha in a magnificent interior, probably a prosperous Antwerp merchant’s home. But perhaps the most arresting of the genre is Pieter Bruegel’s Massacre of the innocents, a deceptively beautiful scene of a Flemish village under snow that is in fact one of the most savage satires in the history of art. Bruegel casts the Flemish townspeople in the role of the innocents and their families, while the perpetrators of the crime are Imperial troops serving their Habsburg overlords. The painting later belonged to the Emperor Rudolf II, when the subject was changed to a scene of plunder.

The great tradition of Flemish landscape painting is explored in the exhibition. A type of ideal panoramic landscape, first seen in the work of Pieter Bruegel, served as the setting for a range of subject matter, from genre scenes to Biblical stories. In Jan Brueghel’s Adam and Eve in the garden of Eden, the Southern Netherlands is transformed into a Christian Arcadia, while Roelandt Savery depicts the fear and fascination of a more hostile nature in Lions in a landscape. Three of Rubens’s greatest landscapes are included, which were painted for the artist’s personal pleasure and hung in his house in Antwerp. The farm at Laken, Summer and Winter are a celebration of the blessings of peace, the fertility of the region and of the sacred ritual of work on the land.

Also featured is an important group of religious paintings in the tradition of the Italian Renaissance and strongly influenced by the study of classical antiquity. Among these are two treatments of The assumption of the virgin by Dionys Calvaert and Rubens respectively, Crispin van den Broeck’s Christ healing the sick, Marten van Heemskerck’s apocalyptic The four last things and Van Dyck’s Christ healing the paralytic, one of three religious paintings by the artist in the exhibition.

At the heart of Bruegel to Rubens: masters of Flemish painting are paintings created during the reign of Archduke Albert and his wife, the Infanta Isabella, regents of the Spanish crown from 1598 until 1633. From this period comes a group of powerful portraits by Van Dyck and Rubens, including the latter’s self portrait (a gift to Charles I when Prince of Wales). These works possess a painterly sensuality, a richness of colour and confidence of touch which could possibly be seen as a reflection of a new-found stability, prosperity and Flemish national identity. From the late 1630s and 1640s are the everyday peasant scenes of David Teniers. The stolen kiss, Interior of a kitchen with an old woman peeling turnips and A kermis on St George’s day show the artist’s extraordinary command of light effects, delight in the textures of simple interiors and masterful depiction of the comic character.

The exhibition is also accompanied by the catalogue Bruegel to Rubens: masters of Flemish painting by Desmond Shawe-Taylor and Jennifer Scott. An education programme supporting the exhibition at the Queen’s Gallery, Palace of Holyroodhouse, offers lectures and tuition. Artists of all levels can take inspiration from the paintings and the beautiful surroundings of Holyroodhouse on a one-day practical art course Looking at landscapes on 18 March 2008. Bookings are also being taken for a joint study afternoon with the National Galleries of Scotland on 28 February 2008. This event entitled Masters of Flemish painting will explore sixteenth and seventeenth-century Flemish masterpieces in the Royal Collection, the National Galleries of Scotland and The Royal Museum of Fine Art, Antwerp.