The Detroit Institute of Arts invites visitors to experience an exhibition that explores how science and technology is used to learn about art, focused on one of the DIA’s most iconic European paintings. Bruegel’s The Wedding Dance Revealed.

The year 2019 marks the 450th anniversary of artist Pieter Bruegel the Elder’s death, and to commemorate it, the DIA’s Conservation department and the European Art department collaborated to trace the life of the painting from its creation in 1566 to the present, including the story behind the DIA’s exciting acquisition of the work in 1930. This exhibition is free with museum admission, which is always free for residents of Macomb, Oakland and Wayne counties. 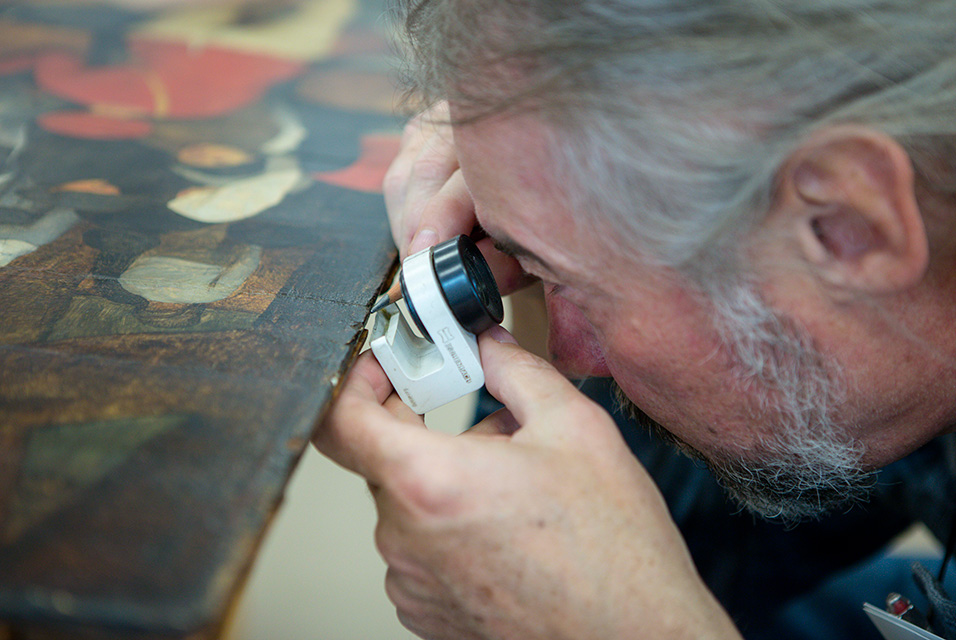 The DIA was the second museum in the U.S. to acquire a painting by Bruegel, and it soon became one of the museum’s most prized and beloved works. This exhibition features three other works from the DIA’s collection, as well as conservation images (x-ray and infrared), archival materials, pigments and a variety of tools inspired by Bruegel’s complex quest to source and create the colors used in the painting. The exhibition is located in Special Exhibitions Central, adjacent to the Detroit Industry murals.

The first gallery starts with the DIA’s acquisition process, which includes archival telegrams from DIA director Wilhelm Valentiner (1880–1958) during his trip to Europe in 1930. Following the acquisition of this work, the exhibition delves into the major 1941 conservation treatment by legendary conservator William Suhr (1896–1984), where the records of his careful and deliberate treatment of the work are being displayed, including the discovery of the codpieces, which shocked patrons and created buzz in the news. In the central gallery the painting itself resides in the middle of the room, unframed and in a case that allows for the public to observe it in the round. This space also focuses on the visual analysis of the painting where conservators utilized the DIA’s science and imaging labs, allowing mysteries to be uncovered using technology. In the final gallery of the exhibition, the public will be brought to the moment of the painting’s creation. DIA conservators were able to not only identify the techniques and materials used by Bruegel, but they were able to trace the origins and manufacturing of some of the painting’s pigments, revealing how time consuming and temperamental some were to acquire or produce.

”This exhibition gives our visitors a special opportunity to explore the science behind the work we do here at the DIA,” said Salvador Salort-Pons, DIA Director. “This painting is a treasure in our collection, and by experiencing its history and background, visitors will gain a new understanding of not only the work of Bruegel himself, but also museum curators and conservators.”

The Wedding Dance was one of many works by Bruegel, whose depictions of leisurely and sometimes joyful scenes of peasant life made him one of the most influential artists of his time. His work inspired generations of family members, all following in a similar style. This exhibition will be accompanied by volume 93 of the Bulletin of the Detroit Institute of Arts devoted to an art historical and conservation overview of the picture.

A companion show titled “From Bruegel to Rembrandt: Dutch and Flemish Prints and Drawings from 1500 to 1700” will also be on view at the DIA starting February 15–July 26, 2020.