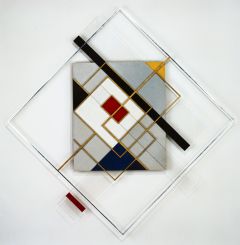 When he died in 1992, Dutch artist César Domela left behind an oeuvre that was as substantial as it was varied. Part of it passed into the possession of his daughters, Lie Tugayé-Domela Nieuwenhuis and Anne Dutter-Domela Nieuwenhuis. They are now donating thirteen of the relevant works to the Gemeentemuseum Den Haag. The gift forms an important addition to the museum’s existing Domela collection, expanding it to provide a complete overview of the work of this multifaceted artist. From 24 November, the public will have its first chance to view this exceptionally important donation, which comprises paintings, reliefs and one sculpture, as part of a major retrospective devoted to Domela.

César Domela was born in 1900 as the youngest son of the well-known Dutch socialist politician Ferdinand Domela Nieuwenhuis. At an early age, he moved to Italy, where he rubbed shoulders with a number of avant-garde artists. Soon after that, he met Mondrian, Van Doesburg and other members of the De Stijl group, of which he himself became the youngest member in 1924. However, Domela’s artistic development took a different direction from that of most of his fellow-members. He devoted himself increasingly to the development of reliefs: three-dimensional paintings, in which he ascribed a major role to the diagonal. He also experimented with photomontages for use in the world of commercial advertising. His work was well received and in 1936 it was included in the Cubism and Abstract Art exhibition at the Museum of Modern Art in New York.

After the Second World War, the reliefs came to dominate his output. In 1960 the Gemeentemuseum Den Haag purchased work by him and held a retrospective. Twenty years later, this was followed a second major retrospective of his work. Today, the museum possesses an extensive collection, focusing until the present donation principally on the photomontages and advertising material. This special relationship between the Gemeentemuseum Den Haag and César Domela is one reason why his daughters have decided to donate thirteen of their father’s works to the institution; another is the fact that the works form an excellent complement to the museum’s wider holdings. The Gemeentemuseum Den Haag is extremely proud to have been offered this gift and delighted that the Domela collection, which is so valuable a part of its core holdings, will now provide a complete overview of the artist’s entire career. The gift coincides with the official opening at the Netherlands Institute for Art History (RKD) of the César Domela archive, bequeathed and donated to the Dutch State and given into the safekeeping of that institution.

The official presentation of the donation will take place on 23 November. Gemeentemuseum director Wim van Krimpen will receive the relevant works of art from the hands of Lie Tugayé-Domela Nieuwenhuis and Anne Dutter-Domela Nieuwenhuis. The presentation ceremony will also signal the opening of the museum’s major César Domela retrospective. The exhibition will include not only the thirteen works now being donated to the Gemeentemuseum Den Haag, but also ten reliefs donated to the Sprengel Museum in Hanover, a large number of works on loan and, of course, works by Domela already in the collection of the museum. All this will be complemented by related material, such as photomontages by Schuitema and Zwart.

The exhibition will be accompanied by a lavishly illustrated catalogue containing not only details of all the donations, but also an extraordinarily interesting interview in which Lie and Anne Domela Nieuwenhuis talk about their father, his art and their donation to the Gemeentemuseum. The catalogue will be on sale in the museum shop, via the web shop (shop.gemeentemuseum.nl) and from the RKD.