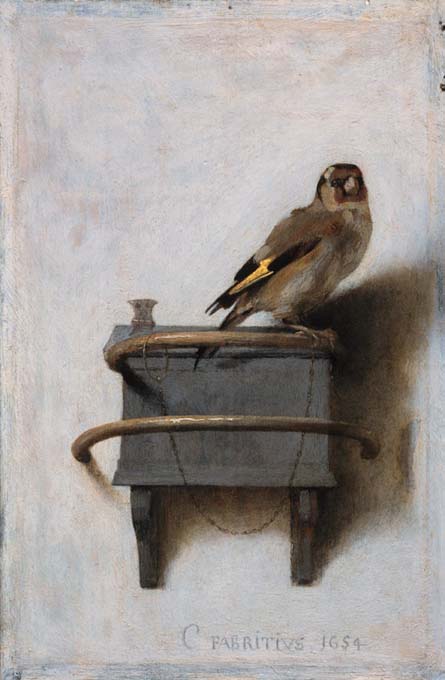 The Mauritshuis will be mounting the first survey exhibition ever of the work of Carel Fabritius (1622-1654) from 25 September 2004 to 9 January 2005. The life of this young and ingenious painter ended tragically in 1654: he was one of the victims of the enormous explosion of the municipal arsenal of Delft. As a result, he left behind a modest, yet multifaceted oeuvre. Its exceptional quality marks Fabritius as one of the true ‘geniuses’ of 17th-century Dutch painting. Had he been granted a longer life, his fame today might have equalled that of his teacher Rembrandt or his fellow townsman Vermeer.
Partly thanks to recent discoveries, Fabritius’ oeuvre – shortly to be been in its entirety in the Mauritshuis – now comprises 12 paintings. Authentic documents and written and painted sources by his contemporaries are also presented. Thus, the Mauritshuis is giving the most complete possible picture of this astonishingly talented painter and his turbulent life.

Exhibition in two sections: the actual paintings and a documentary presentation

Confusion about Fabritius’ work stimulated extensive art-historical and technical research in recent years. Some paintings turned out to be incorrectly attributed to him, an early work was discovered in 1985, and several unsigned paintings could be ascribed to the master. The exhibition comprises 14 paintings: 12 by Fabritius, and the Man with a helmet, now no longer given to him, and the Slaughtered ox, the attribution of which is still uncertain.

The exhibition represents a wonderful opportunity to become acquainted with Fabritius’ modest but highly original oeuvre in its entirety, from the early history scenes to his later Delft masterpieces and his three self-portraits.

Complementing the paintings is a documentary presentation providing background information on Fabritius’ work and life. The material on view is diverse. For example, the locations of his home and the municipal arsenal are indicated in a map of Delft (by Johannes de Ram and Coenraet Decker). A painting of the church in Middenbeemster was probably made by Fabritius’ father, who like his brothers, Johannes and Barent, was an amateur painter. A 17th-century peepshow from the Museum Bredius and a reconstruction of a perspective box with a reproduction of Fabritius’ View of Delft yield insight into the possibilities of perspective, with which Fabritius also experimented. Surprising results from recent restoration projects are explained. The account of the disastrous explosion and Fabritius’ tragic death by his contemporary and city biographer of Delft, Dirck van Bleyswijck in an authentic document is also included. And, a print by Gerbrand van den Eeckhout (in a pamphlet by Schabaelje) and a painting by his fellow townsman Egbert van der Poel show the havoc following the explosion.

The Delft arsenal exploded on 12 October 1654, ruining a large part of the town. The 32-year-old Fabritius was among those who lost their lives in this disaster. At the time, he was already famous and considered to be one of the best artists. With his phenomenal deft handling of the brush, he was Rembrandt’s most gifted pupil and his subtle rendering of illumination influenced the young Vermeer. The explosion also destroyed his studio, thus only a small number of his paintings have been preserved.

Fabritius learned the rudiments of painting from his father, a schoolmaster and a sacristan, who painted when not working. In 1641, at the age of 19, Fabritius moved from Midden-Beemster to Amsterdam to work in Rembrandt’s studio. His earliest paintings clearly reflect his teacher’s influence in their dramatic chiaroscuro, broad brushwork and warm palette. After the death of his wife, Fabritius left Rembrandt’s studio in 1643 and returned to Midden-Beemster.

Around 1650 he settled in Delft, where he remarried. He reached full artistic maturity there, in a town that only played a modest role in the art of painting in the first half of the 17th century. His palette brightened and his rendering of light and atmosphere with subtle gradations of grey and ochre tints was unparalleled. His arrival in Delft coincided with the beginning of a spectacular period of artistic growth in the city.
Two painters following in Fabritius’ footsteps put Delft on the artistic map around 1655, namely Pieter de Hooch and Johannes Vermeer.

Fabritius’ View in Delft, The sentry and The goldfinch, all three from his Delft period, are uncontested masterpieces of Dutch painting. The View in Delft was painted as the back of the interior of a so-called perspective box: the scene could be viewed through a hole at the front of the case. Such constructions were particularly popular in Delft at the time and sources confirm that Fabritius indeed painted such “peepshows”. When the painting is seen flat the perspective of the church is severely distorted, however when mounted on the curved back wall of a perspective box, the correct spatial construction becomes visible.

In The sentry, a highlight of the exhibition, Fabritius initiated an entirely new and original treatment of light. He succeeded in conveying utter tranquillity in this sun-drenched scene with a resting soldier and his dog.

Preparatory to the exhibition, The goldfinch – one of the gems in the collection of the Mauritshuis – was restored in public view in the spring of 2003. The treatment included removing the discoloured varnish so that the original bright colours emerged once again. Moreover, in the summer of 2003, The goldfinch was scanned by a Siemens computer tomograph in the Meander Medical Centre in Amersfoort.

This expressive portrait of a bird is a fine example of Fabritius’ illusionism. Uncertainty exists as to the original function of this panel: should it be understood as a trompe-l’oeil? It looks just like a real bird set against a whitewashed wall chained to its perch.

A second recently restored painting is the Portrait of Abraham de Potter (Rijksmuseum, Amsterdam) from 1649. Here too the heavily discoloured varnish was removed, laying bare the original colour values and brushstrokes. Moreover, an unexpected trompe l’oeil came to light in the upper right corner: a nail casting a shadow.

Siemens Nederland N.V. is the exclusive sponsor of the exhibition Carel Fabritius: the young master.

On the occasion of the exhibition Carel Fabritius: young master painter the Netherlands Institute for Art History (RKD) and the Mauritshuis are organizing an international scholarly symposium on this artist, focussing on new findings and insights emanating from the exhibition.

The Mauritshuis, The Hague, and the Netherlands Institute for Art History (RKD), The Hague

The symposium will be held on Thursday 2 December 2004 – from 10.00 until 17.00 – in the auditorium of the Royal Library, Prins Willem-Alexanderhof 5, The Hague, followed by a visit to the exhibition in the Mauritshuis.

Registration fee: € 50, including lunch, drinks and visit to the exhibition. For more information and registration send an e-mail to communicatie@rkd.nl or see www.rkd.nl (under: Activities).