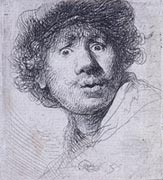 In honor of Rembrandt’s four-hundredth birthday in 2006, The Morgan Library & Museum presents highlights from its exceptional collection of Rembrandt etchings. Pierpont Morgan (1837–1913) laid the foundation for this collection—the finest in North America—when he acquired his first Rembrandt etchings from Theodore Irwin, Sr., in 1900 and George W. Vanderbilt in 1906. Today the Morgan holds impressions of many of the three hundred or so known etchings by Rembrandt as well as multiple, often exceedingly rare impressions of various states. The exhibition will showcase some of the most celebrated etchings from the collection along with a few lesser known examples.

Renowned in the history of printmaking, Rembrandt’s etchings are famous for their dramatic intensity, penetrating psychology, and touching humanity. Celebrating his unsurpassed skill and inventiveness as a master storyteller, the exhibition addresses some of the central and often recurring themes of the master’s work including portraiture, the Bible, scenes from everyday life, the nude, and landscape.

Celebrating Rembrandt opens with a selection of Rembrandt’s early portraits, created mostly while he was still a student in Leiden. His own face was often the focus of these spirited works, primarily exercises in lighting, technique, and, above all, expression. Sensitive renderings of the artist’s own family—his elderly mother; first wife; Saskia; and son Titus—are also featured. Biblical depictions, the largest and arguably most important category of Rembrandt’s etched work, are also featured. Subtle shifts in mood and meaning will be illustrated in the different states of Christ Presented to the People and Christ Crucified Between Two Thieves (The Three Crosses). Other key highlights, such as Adam and Eve, Jacob Caressing Benjamin, and Abraham’s Sacrifice, will demonstrate the unique perspective Rembrandt brought to these biblical accounts. Also showcased is the Morgan’s pristine impression of one of Rembrandt’s most ambitious compositions, “The Hundred Guilder Print.”

Rembrandt was fascinated with the social outcast and those on the fringes of Dutch society. Key examples of that work that will be on view include Beggar Man and Woman Behind a Bank, Beggars Receiving Alms at the Door of a House, and The Rat Catcher. Among the depictions of individuals participating in everyday activities are The Skater and an example of a more earthy nature, The Monk in the Cornfield. In his later years, Rembrandt continued to produce striking, often introspective portraits, such as the Self-Portrait Etching at a Window, of which the Morgan possesses the rare first and second states. Etchings of friends and contemporaries include the Dutch patrician and collector Jan Six, who is depicted shown reclining gracefully against a windowsill reading by sunlight.

A section on landscape etchings will illustrate how Rembrandt captured the spirit of the Dutch countryside—and often inserted charming hidden details—in works such as The Three Trees, Cottages and Farm Buildings with a Man Sketching, and Landscape with Trees, Farm Buildings, and a Tower.