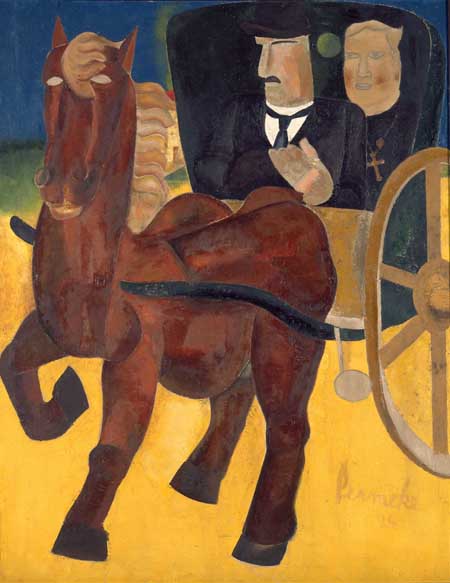 The Gemeentemuseum Den Haag is proud to present a retrospective of the works of the most important exponent of Flemish expressionism, Constant Permeke (1886 – 1952).

The subjects of his paintings, drawings and sculptures were mainly labourers, fishermen, farmers and miners, their figures merging with the surrounding landscape, but he also produced many impressive nudes. In sober, earthy tones Permeke emphasised the harshness of these people’s lives and their intimate connection with the land.

Constant Permeke grew up in Antwerp in an artistic milieu. His father was a landscape painter and curator of Ostend museum. He studied at the academies of Bruges and Ghent, and in 1909 went to live in an artists’ colony in Sint Martens-Latem with a group of friends. He was later to become a key figure in various avant-garde movements such as Selection (1920).

Permeke initially painted in an impressionist style, experimenting with pointillist techniques. But when he realised that he could not express the harshness of fishermen’s lives or profound emotion in this way, he abandoned high-toned colour to discover a very individual form of expressionism, with earth tones, thick layers of paint and a strong emotional charge. His palette of light, clear colour gave way to murky greens, faded reds and drab browns, his model being Van Gogh in his Potato Eaters period. Permeke produced his first expressionist paintings in England, where he was recovering from serious injuries suffered at the beginning of the First World War. In England he kept in touch with Gustaaf van de Woestijne and George Minne, who had also sought refuge there from the war.

In 1919 Permeke returned to Ostend and began painting fishermen and farmers. His style is characterised by powerful contours, dark colours and simplified forms executed in a highly expressive manner. His figures are deliberately distorted and his colours warm. Besides painting he also made monumental sculptures of the human form informed by Cubism and the work of Leger. In contrast to other expressionists he also produced large-scale drawings characterised by accuracy and refinement of line. Permeke became the leading figure of Flemish expressionism and during his life had successful exhibitions in Paris, Madrid, London and even in the US. In 1927 his works were frequently exhibited in the Kleykamp Art Gallery, and in 1947 the Gemeentemuseum held a large exhibition devoted to his work. Nowadays Permeke features in the collections of all the major Dutch museums and the Gemeentemuseum has eight of his works.This retrospective demonstrates Permeke’s versatility, with examples of all the techniques he was a master of.

To accompany the exhibition Waanders Uitgevers have published a catalogue with articles by Willy Van den Bussche, director of the Constant Permeke Museum in Jabbeke, and John Sillevis, curator of the exhibition.