Between the late sixteenth century and the early eighteenth century, artists working in the Netherlands—then known as the Dutch Republic—produced an extraordinary number of landscape drawings. Many of these works depicted sites that were either recognizable as or evocative of the country’s cities, villages, and countryside. This profusion of local imagery coincided with the young country’s quest for global dominion, as well as with war and dramatic ecological change at home. As notions of Dutch “territory” shifted, artists engaged with the world by drawing outside, from direct observation—a practice repeatedly encouraged in the art theory of the period. Once back in the studio, they could produce finished drawings and works in other media, adapting observed motifs or fusing them into altered or imagined views. In so doing, they constructed a selective vision of the Dutch landscape that by turns depicted, hinted at, or ignored the changes occurring around them.

With 90 works selected almost entirely from the holdings of the Harvard Art Museums and the Maida and George Abrams Collection, this exhibition demonstrates how Dutch artists navigated intersections, or crossroads, between artistic traditions and environmental realities through their drawings. It also considers the associations that the increasingly urban population of the Dutch Republic brought to these works—and what we bring to them today. 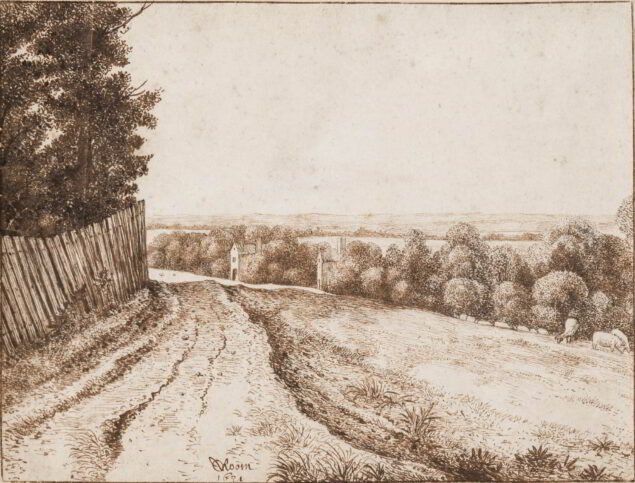 The show opens with exceptional works by progenitors of the Dutch landscape tradition, Pieter Bruegel the Elder and the so-called Master of the Small Landscapes, both from mid-1550s Antwerp. Drawings by Abraham Bloemaert, Claes Jansz. Visscher, Cornelis Vroom, Esaias van de Velde, and Jan van Goyen trace the development of what would become quintessentially Dutch landscape idioms and motifs, from cottages and farmhouses to ice-skating scenes. A selection of drawings by Rembrandt and members of his circle reveals the ongoing fascination with the rustic as a means to explore not only rural life, but also qualities of texture and light. Works by Jan Lievens, Jacob van Ruisdael, and Anthonie Waterloo demonstrate the evolving appeal of woodland and forest imagery in the wake of deforestation, while drawings by Aelbert Cuyp, Roelant Roghman, and Lambert Doomer register coinciding interests in topographical and architectural views. Through rare examples of still-intact 17th-century albums of prints and drawings, the exhibition also highlights the tactile, interactive manner in which works on paper were typically viewed in the period. All are presented in dialogue with a focused selection of objects depicting other parts of Europe and Dutch overseas colonies. Together, these works make clear that the story of “the Dutch landscape” has important chapters in places both within and beyond the Republic’s national borders.

The exhibition is curated by Joanna Sheers Seidenstein, the 2018-22 Stanley H. Durwood Foundation Curatorial Fellow; and Susan Anderson, curatorial research associate for Dutch and Flemish drawings, both in the Division of European and American Art at the Harvard Art Museums.

A lushly illustrated catalogue with essays by the curators and by Yvonne Bleyerveld, Anne Driesse, Joseph Leo Koerner, and William W. Robinson accompanies the exhibition. An afterword by collector, donor, and lender George S. Abrams closes out the volume.