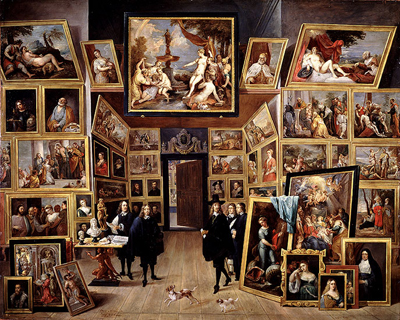 This exhibition tells the story of one of the most remarkable artistic enterprises of the 17th century: David Teniers’ publication in 1660 of the Theatrum Pictorium or ‘Theatre of Painting’, the first illustrated printed catalogue of a major paintings collection. With loans from the Museo del Prado, the Royal Collection, the National Gallery of Ireland, Glasgow Museums and the British Library, the exhibition will give an in-depth account of this influential project which provided the foundations for the modern catalogue and documented one of the greatest princely collections ever assembled.

David Teniers the Younger (1610-90) was already a successful painter when in 1651 he was appointed court artist to the Governor of the Southern Netherlands (comprising most of modern Belgium). His new patron was the Hapsburg Archduke Leopold Wilhelm, cousin of King Philip IV of Spain. During the single decade of his governorship (1646-56) Leopold Wilhelm formed one of the greatest art collections of his age, and Teniers effectively became its curator. Leopold Wilhelm’s collection came to number approximately 1,300 works, including paintings by Holbein, Pieter Bruegel the Elder, Van Eyck, Raphael, Giorgione, Veronese and more than 15 works by Titian. This exceptional accumulation of masterpieces now forms the heart of Vienna’s Kunsthistorisches Museum.

Teniers first depicted this collection in 1651, painting the large and innovative Archduke Leopold Wilhelm in his Picture Gallery, which will be on loan to the exhibition from Petworth House. Although the precise arrangement of the paintings is fictionalised, Teniers has sought to give a detailed visual compendium of the collection. The Archduke is depicted in the company of courtiers and fellow collectors, with Teniers showing his patron a picture by Annibale Carracci. Propped against chairs and frame to frame on the walls of the gallery are a selection of the Archduke’s greatest treasures, including at either end of the top row The Three Philosophers by Giorgione and Titian’s Diana and Actaeon (now in the National Gallery, London); further down The Madonna of the Cherries and Jacopo Strada, also by Titian; and on the floor Esther before Ahasuerus by Veronese and Raphael’s St Margaret (draped in fabric).

Most of these paintings had only recently been acquired by the Archduke from the collection of the Duke of Hamilton (executed in 1649 following the Royalist defeat in the English Civil War). The Hamilton paintings, which included numerous prized works by Titian, became the jewels of Leopold Wilhelm’s collection of Italian art. Many of them, including Titian’s Nymph and Shepherd, can be identified in a second gallery interior on loan to the exhibition from the Museo del Prado. Exceptionally for a work of this size, Teniers painted Archduke Leopold Wilhelm in his Gallery in Brussels on copper and the Archduke sent it as a gift to Philip IV, one of his few genuine rivals as a collector.

Having first documented Leopold Wilhelm’s collection in these gallery pictures, Teniers embarked on an even more ambitious representation of his patron’s achievements as a collector: an illustrated catalogue of 243 of the Archduke’s most admired Italian paintings. This would become the Theatrum Pictorium. Like the gallery interiors, the selection was made up almost entirely of works acquired from the Hamilton collection and many of the same paintings appear in both the Theatrum and the gallery views. However, the Theatrum Pictorium was designed to reach a far greater audience than the international courtly circle of the gallery interiors and its presentation of Leopold Wilhelm’s collection is more systematic. Teniers employed a team of 12 engravers for the unprecedented task of reproducing the 243 paintings selected for inclusion in the Theatrum. Remarkably, he produced small copies in oil of each of the chosen paintings, issuing these as models to his engravers in order to ensure the accuracy of their work.

Teniers’ painted copies have long been recognised as a valuable historical resource, particularly since many pictures in the Archduke’s collection, including most famously Giorgione’s The Three Philosophers, were altered during a reinstallation of the Viennese collections in the 18th century, while others have been lost altogether. Measuring approximately 17 x 25 cm and executed in full colour, these copies are works of great beauty and skill in their own right, and they show Teniers’ profound interest in the achievements of his illustrious predecessors. The Courtauld Institute of Art Gallery holds 14 of these works, the largest group in any public collection. With the addition of selected loans, a total of 25 copies will feature in the exhibition, including several after masterpieces by Raphael, Giorgione and Titian visible in the gallery interiors. These copies will be displayed alongside the prints from the Theatrum for which they were made and in proximity to views of the Archduke’s gallery in which the original works can be identified.

By the time that the Theatrum Pictorium was published in 1660 the Archduke had returned to Vienna, taking his collection with him, and Teniers published the volume at his own expense. The importance of his achievement was soon recognised and his remarkable publication was printed in four further editions. Several examples will feature in the exhibition, including a rare 1660 edition with the Archduke’s coat of arms, a copy owned by Joshua Reynolds on loan from the British Library, and one lavishly introduced in four languages.

The Theatrum Pictorium continued to be used as a reference book well into the 18th century and had an enormous influence on the way that collections came to be organised, understood and published. David Teniers and the Theatre of Painting will offer the first dedicated account of this ground-breaking project.