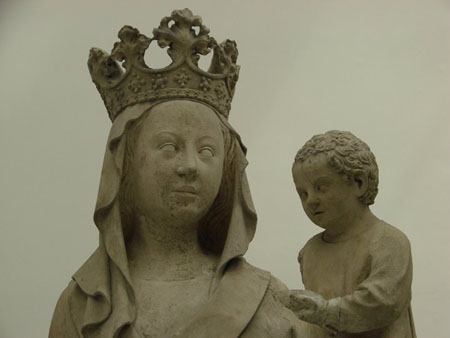 Interesting small presentation on art and culture in the time of Lodewijk van Maele (†1386). During Lodewijk’s reign the imposing town hall of Bruges was erected, with a genealogy of the counts of Flanders on the facade in the form of statues. Lodewijk was the last count of Flanders from the Dampierre dynasty. The marriage of his daughter Margareta of Flanders with the Burgundian duke Philip the Bold saw the birth of a new era.

This catalogue accompanies an exhibition at the Groeninge Museum, Bruges, which celebrates one of the greatest European artists of the late fourteenth century, Andre Beauneveu, apparently born in Valenciennes c. 1335. Active throughout the Southern Netherlands, his reputation grew swiftly and in 1364 he was commissioned by the King of France, Charles V, to create a group of royal tombs at St Denis. In the 1370s he oversaw another ambitious funerary project, for Louis de Male, Count of Flanders at Courtrai whilst continuing to undertake major civic commissions at Ypres, Mechelen and his home town of Valenciennes. Beauneveu spent the last years of his career in Bourges working for the most celebrated royal patron of all, Jean, Duc de Berry.

The extraordinary scope of his talent was fully exploited by Jean de Berry, for whom he also produced manuscript illuminations, designs for stained glass and oversaw the construction of his chateau at Mehun-sur-Yevre. However, it is primarily his unrivalled skill in the handling of stone which gives Beauneveu such immense significance, not only in the context of Northern sculpture but also for the arts of
Europe as a whole.

The known sculptural oeuvre of Beauneveu, however, is not substantial. The reappearance of the Virgin and Child once in the collection of Eduoard Aynard at the Abbey of Fontenay and its new attribution to this sculptor ‘who had no better nor equal in any land’, dramatically increases our knowledge of his work and must entail a rethink of many histories of French and Flemish art in the fourteenth century, for we now have not two but three life sized figures from which our view of his style and achievements can be formed.