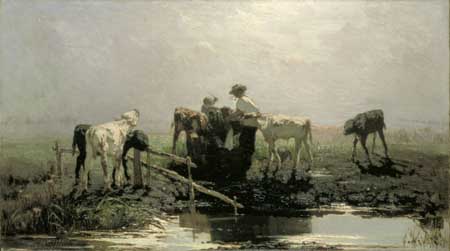 To coincide with the exhibition about the Oyens brothers, the Gemeentemuseum is organising a display of work by the Maris brothers. The presentation will show that each of the three – Jacob Maris (1837–1917), Matthijs Maris (1839–1917) and Willem Maris (1844–1910) – occupied his own distinctive niche within the Hague School. Jacob became famous for his landscapes and views of towns, Matthijs’s style can be described as visionary and imaginative, and Willem achieved success chiefly with his polder landscapes featuring cows and ducks.

Jacob Maris was a founder member of the Hague School. He was inspired initially by the German Romantic illustrator Ludwig Richter. Later he became interested in the revolutionary ideas of the artists of the Barbizon School, who believed in working directly from nature and wherever possible “en plein air” (in the open air). Jacob Maris adopted their philosophy and worked in the woods around Oosterbeek, where artists like Gerard Bilders and Anton Mauve were also setting up their easels. In 1864 he moved to Paris to further his career. He made oil sketches of rocky landscapes in the area around Barbizon and produced work for Parisian art dealers Goupil. ‘The Little Knitter’ is a typical example of a Salon painting from this period. Following the Franco-Prussian war of 1870, Jacob returned to The Hague, where he became a leading figure in the Hague School that began to emerge in around 1875. He turned to painting typical Dutch landscapes and views of Dutch towns, with an emphasis on the atmospheric effects produced by cloudy skies.

Like Jacob, the young Matthijs Maris was interested in Romantic subjects. He remained true to that movement while studying in Antwerp but in the 1860s he followed Jacob to Oosterbeek – the ‘Dutch Barbizon’, as it was sometimes called. In 1861 he travelled to Germany and to Switzerland, where his visit to Lausanne, on Lake Geneva, made a particularly deep impression on him. Matthijs was a visionary who felt that imagination was more important than recording the real world. In 1869 he too moved to Paris, where his brother had by then made a name for himself. Unlike Jacob, Matthijs never returned to the Netherlands. He stayed on in France and developed a style increasingly divergent from that of the Hague School. His final years were spent in London, living as an eccentric recluse, supported by his art dealer, Van Wisselingh.

Willem Maris was taught by his elder brothers and took evening classes at the Hague Academy. In Oosterbeek he became friendly with Anton Mauve. Although he travelled with Blommers to Germany and Norway, Willem lived all his life in the Netherlands and devoted himself to sunny polder landscapes featuring cows and ducks. His work had a strong international following. His pupils included Poggenbeek and Breitner.

All three Maris brothers were gifted draughtsmen and water colourists and contributed to the success of the ‘Hollandse Teeken Maatschappij’ (the local water colourists’ association) and the Pulchri Studio artists’ club in The Hague.