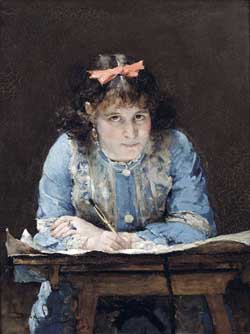 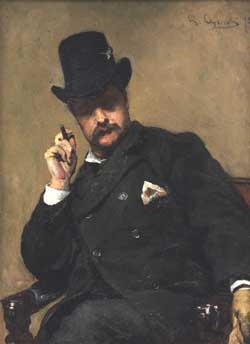 Sets of twins – especially identical twins – are a rare occurrence in art history. Dutch artists David and Pieter Oyens are among the few exceptions. They spent most of their lives in Brussels, the capital of Belgium: then an international city bursting with new ideas and opportunities, with an artistic climate influenced both by the town’s bourgeoisie and by its bohemians. The Gemeentemuseum’s exhibition The Oyens Brothers: Twin Painters paints a picture of life in Brussels and of the artistic circles surrounding these unusual twin brothers.

David and Pieter Oyens were born in 1842. Their father was a prominent Amsterdam banker. Although taught to draw from an early age, they were originally destined to follow their father into the banking world. However, their parents soon realised that neither of the brothers was well-suited for a life in business and rather hesitantly resigned themselves to their becoming artists. In the 1860s, David and Peter moved to Brussels, which was a boom city for the arts at that time.

In Brussels, the brothers were inseparable. They shared a studio, modelled for each other and moved in the same artistic circles. From 1875 they were highly successful: leading collectors began to buy their work and they won prizes in various competitions and salons. In the 1880s they continued to prosper, both financially and in their private lives. David had married as early as 1866 and in 1893, at the age of 51, Pieter also found a wife. But then tragedy struck. Soon after his wedding he had a stroke and in February 1894, a month before his daughter was born, he died.

The death of his brother was a bitter blow to David; he became less productive and his health deteriorated, prompting him to move with his wife to Arnhem. However, he found it hard to settle there. He missed Belgium and Brussels in particular. Around the turn of the century things improved, especially when he moved back to Brussels. But not for long: he died in February 1902. David was buried next to his brother Pieter: the twins were united again.

David and Pieter Oyens were so alike that even David’s wife Betsy found it hard to tell them apart: thinking that she was talking to her husband, she once asked Pieter to ask his brother (that is, himself) not to come round quite so often. Their work was also very similar, not only in style and technique but also in choice of subjects (generally studio and cafe scenes). As a result, it is often very difficult to ascribe works simply signed ‘Oyens’ to the right twin.

The Gemeentemuseum’s exhibition The Oyens Brothers: Twin Painters, will bring the brothers’ world back to life. Centring on their oil paintings and watercolours, it will also illustrate the contacts they had with other artists in Brussels, the entertainment world of the time and the role of their studio as a workshop and meeting-place. The exhibition will be accompanied by a lavishly illustrated book containing contributions by Saskia de Bodt, who places the work in the context of the artistic world of Brussels in the last quarter of the 19th century, and Fred Hendriks, who has compiled a major archive on the life and work of the Oyens brothers. During the exhibition, the museum will offer free admission to all identical twins arriving together.